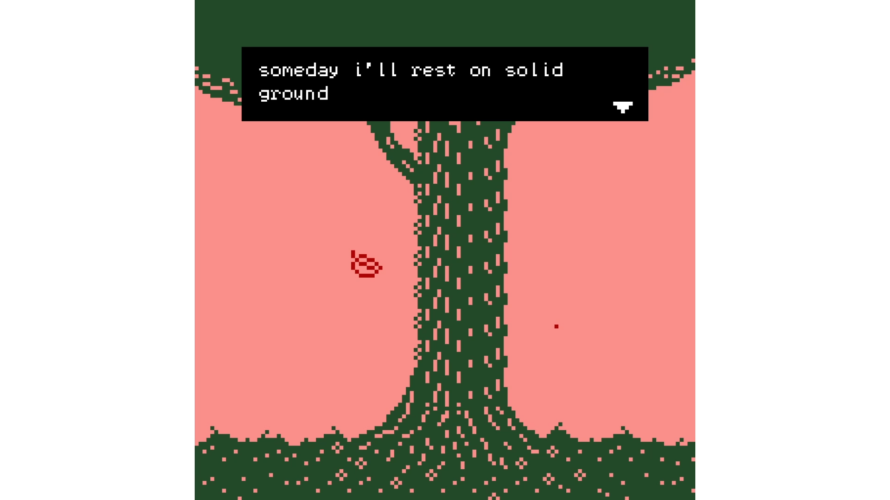 Winter, spring, summer, fall. Or is it Autumn? The name of this poem in the form of a Bitsy creation certainly thinks so, a poem about… falling (according to its creator). A poem that I am not entirely certain I understood, and yet immediately replayed/read multiple times, hoping repetition might make the words’ true meaning reveal itself. Maybe they did. Maybe they didn’t.

Reviewing something like this is a genuine challenge. What does one say about an interactive poem like this, after all, without completely spoiling the experience for those who have yet to play/read it? Well, let’s start with what’s actually going on, how more and more is revealed until it… ends. Like any poem will, sooner or later.

The protagonist, so to speak, in Autumn is a leaf. A leaf with no way to go but left, right, and down, and much like a falling leaf in the real world, sometimes your only option is to go where the wind takes you – in a certain direction. Upon navigating to specific spots, more of the poem will become available, and it’s up to you to piece together what it all means. Something I likely failed to do, although poetry analyzing never really was among my greatest strengths.

Which is quite alright. I got something out of it still, in that the experience gave me something to think about, made ideas appear in my brain. I won’t reveal what here, as that would more than likely be too much of a spoiler. Was that what the developer intended though, or does the story within this poem contain something else? Hard to say. But it’s fine.

We all walk away from interactive experiences with slightly different things, and who knows, maybe you’ll see what I didn’t. Only one way to find out. Won’t cost a cent or take more than a brief minute, so how about it?

Autumn is available on itch.io, for free.