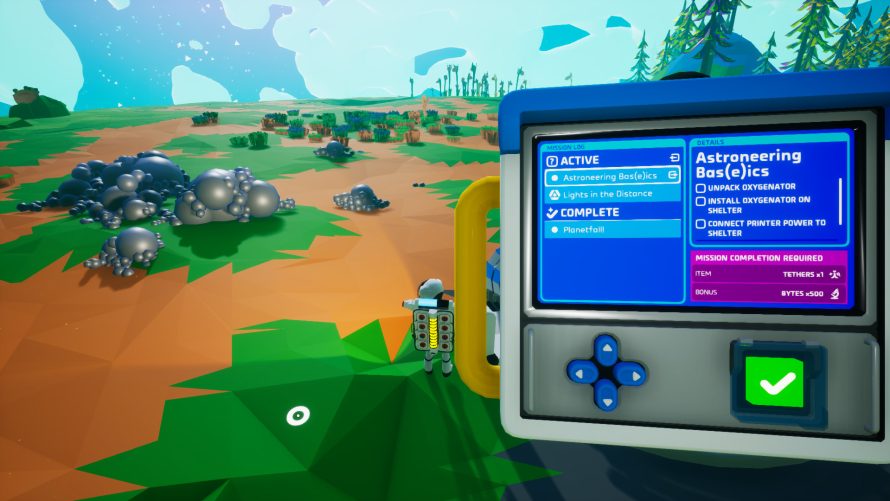 As far as the survival genre in video game form is concerned, most entries tend to stick to, well, good ol’ planet Earth. Doesn’t matter if zombies or other things that clearly don’t exist in our world are part of the experience. But then there are those select few that boldly go… yeah, space. Astroneer, as the title suggests, is a survival crafting hybrid in space. One that just got a rather substantial patch. Groovy!

When I wrote my initial review of Astroneer, little over two years ago, in spite of the game having just been released, content additions were already on the menu. Since then, quite a few things have been done to expand the core experience – including an emote wheel – but that was then, this is now, and a couple of days ago, the Mission, Compass, and Power Update went live. Mission Log! Compass revamp! Power overhaul! Oh yeah.

So, as can be seen in the above screenshot, Astroneer now has a quest system of sorts to help make progression smoother for new and returning players alike. For me, personally, this is a very welcome addition as I haven’t played the game much in the years following its release, meaning I’d all but forgotten how everything worked – beyond the entirely optional, and separate, tutorial. Oh, and the Mission Log is not just a progression tracker either, as rewards are bestowed upon completion of a mission, ranging from Bytes to schematic unlocks, and even physical items.

On top of that, power consumption/draw has been changed for… well… just about everything. One can never have enough power, I always say, but it seems the fine folks over at System Era don’t quite agree with that sentiment. Oh well. Balance if you must. I’ll just have to build another generator or ten. Maybe. We’ll see. Or perhaps one of the new items, like a Large Solar Panel or XL Wind Turbine. So much good stuff in this patch. The compass has also been revamped and ‘enhanced with dynamic navpoint tracking’. Gotta love those fancy words.

Lots of bugs have also been squashed, and the EXO Salvage Initiative is back – for a limited time. Meanwhile, the PlayStation 4 version now has dedicated server support (a permanent addition, obviously), and… last but by no means least, how about an ‘outfit manager’ of sorts to let ya quickly swap between suit/hat/mask/visor/palette combinations? Flight suit up!