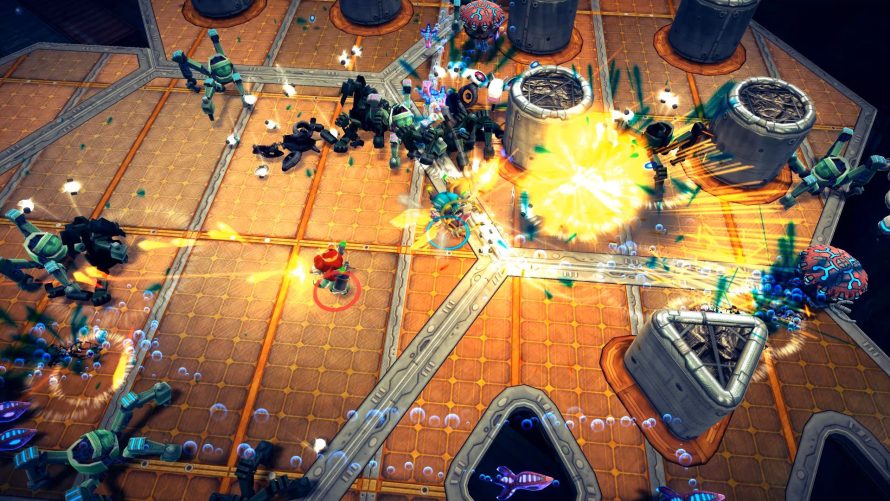 IGF China finalist (and initial release) in 2015, PlayStation 4 port in 2016, and in 2017, Assault Android Cactus is… almost ready to unleash its relentless twin-stick shootin’ action on the Xbox One. Undeniably groovy times await fans of Microsoft’s latest, as this game is a genuine blast -- high difficulty and all. Oh, and did I mention there’ll even be a time-limited demo?

In an odd twist, the game itself also carries a time limit of sorts, seeing how you’ll have to keep an eye on a constantly draining battery. Run out and it’s game over, so do make sure to grab those replenishing energy thingies, or you won’t get far. Especially when going up against the various bosses, as these guys can be downright mean towards, well, whichever android you’ve picked. To them, you’re simply another fly to be swatted. Your job? Prove them wrong, guns, missiles, bombs -- whatever it takes.

Players will need to make every second count as they maneuver through endless swarms of relentless robots to grab power-ups and all-important batteries from fallen enemies.

That said, to make the most of this particular title on the Xbox One, you’re going to need a bit of an upgrade -- to the soon-to-be-released Xbox One X. Fire up Assault Android Cactus on that beast, and you’ll be treated to glorious, crisp 4K visuals running at a smooth 60 FPS (note: no word from the developer regarding the ability to push 60 FPS on regular Xbox One units at the time of writing). Imagine how awesome all those explosions are going to look at such a resolution on your new 60″ TV. Go on.

Assault Android Cactus will be available for Xbox One from November 7, 2017, carrying a $14.99 price tag.