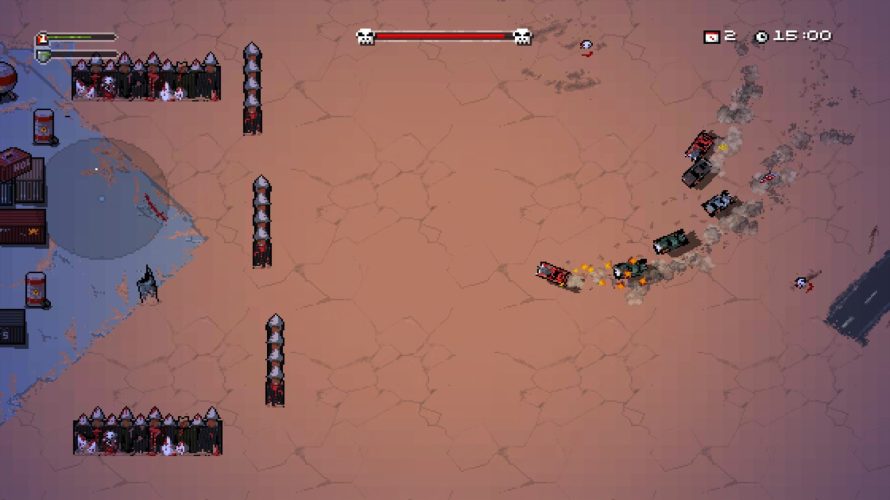 Welcome to the ragelands. Hope you brought plenty of food and water because here, those things pretty much the equivalent of money (like in so many other post-apocalyptic worlds, ya know?). Needless to say, surviving means playing it smart, so… probably best not to piss off the Ragers, as that lot won’t think twice before putting you six feet under. Who? Oh, just the jerks who are in control of this particular part of Ashworld.

Come to think of it, maybe you DO want to piss them off, take out a couple while you’re out scavenging for materials, upgrading your arsenal and all that good stuff. Yeah. Sounds like a better plan than simply cowering in fear, as while Ashworld (the game) is only 95% finished, that does mean it’s actually 95% finished. And as such, there’s plenty to do, see, talk to, beat up – you know the deal – even if finishing the story probably isn’t possible just yet. Or perhaps it is? That remaining 5 % could be mostly bug fixes, including patching up a guy who calls himself ‘the tinkerer’ (source).

Use your smarts, combined with the various weapons, cars, gadgets and raw materials that can be found inside the many underground area’s, buildings, old sky-scrapers, and other area’s of the Ashworld.

As for exactly when we’ll be able to experience all that boomerang, plasma rifle, rocket launcher, and flamethrower-y carnage while driving all kinds of crazy cars in Ashworld… well, right now! If you don’t fancy playing an in-development/Early Access title, however, I’ll have to change my answer to ‘September 2017’, at which time the game will be released on Steam. Where you can actually wishlist it right now. So go ahead and do that, after which… well, be sure to hit the links below!

Ashworld [Early Access] is available from itch.io – full version will be on Steam, come September 2017.

Ashworld official trailer
Facebook Twitter LinkedIn Pinterest Tumblr WhatsApp Telegram E-mail
Previous article After the Massacre: Grab Your Mop to Work for the Mob in 'Serial Cleaner'
Next article 'A Winter's Game' Wants to Wage War With the Power of... Obsolete Technology!