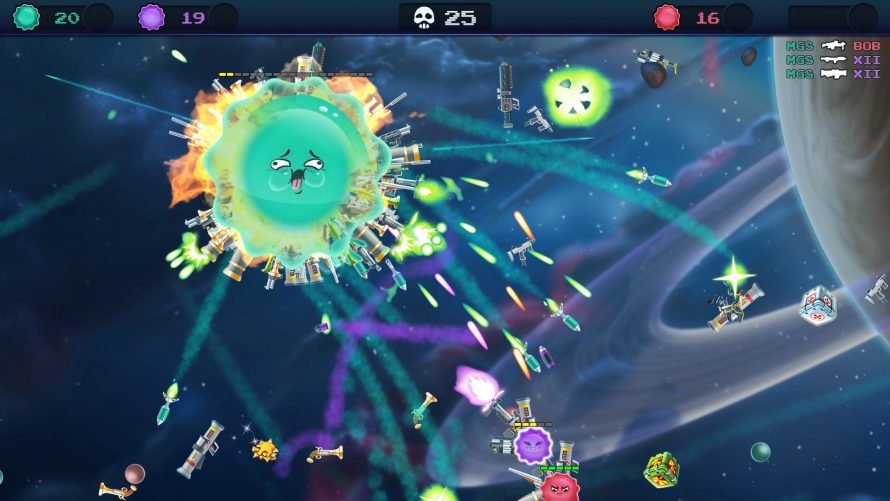 It’s not often that size matters in competitive arcade games. Not as much as in Armed and Gelatinous, at least, for here… oh boy. You’ll very likely end up rather large, which has the unfortunate downside of making you that much easier to hit (and slower to maneuver). But if you’re just a tiny blob, well, then you haven’t collected enough weapons! Because that’s how it works in this crazy game.

Getting too greedy is a surefire way to, as the developer puts it, “swell up like a balloon and get popped”. Which would be bad. Very bad. You’re in it to win it after all… right? Right. Oh right, forgot to mention that physical size is directly reflected upon your health bar. Definitely gonna have to do some quick strategizing in this one: do you go for a large health pool and loads of firepower, or attempt to dash around the battlefield as the tiniest of blobs? I’m sure both will get the job done just fine -- what matters is whether you’re able to pull it off. So pick a color and blast off… into space, with up to three friends/enemies no less! Think fast and try not to let all the action overwhelm ya when the going gets tough.

The main event is best described as a fast-paced bullet-hell space-shooter that pits you against your friends in epic matches of blob warfare!

Should you tire of plain ol’ deathmatch, worry not: loads of other modes are planned for Armed and Gelatinous. Blob Soccer, Blob Bombardment, Blob Blitz, and even Drone Decent. On top of that, the rules can be tweaked extensively, everything from target point count, duration, number of lives, and even available weapons is adjustable! Customization is an important factor when it comes to boosting that ever-important replay value in multiplayer games such as this, and it seems Three Flip Studios is well aware of that. Definitely one to keep an eye out for (even though its scheduled release fortunately isn’t overly far off).