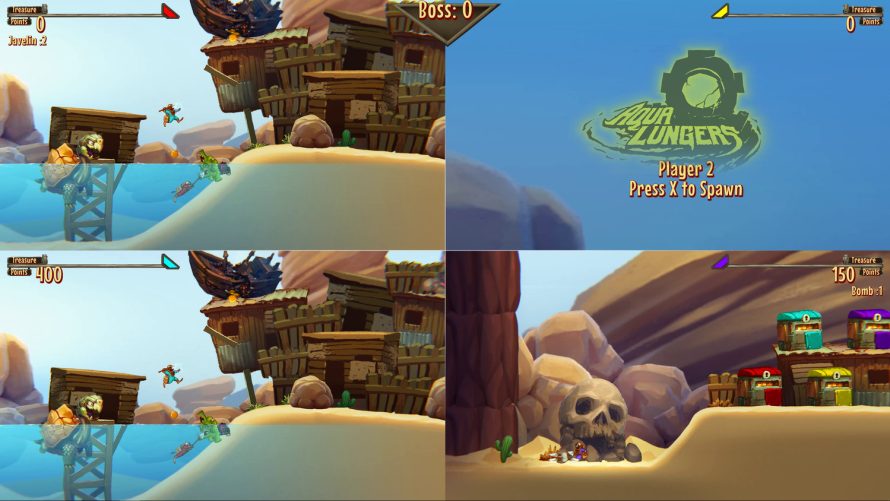 Here’s the thing: treasure has been discovered in Aqua Lungers, and the only thing standing between you and a sizeable fortune… is a lot of deadly aquatic creatures. Oh, and up to three other players, should you choose to invite them to the party. The ‘who can get the treasure first while also staying alive?’ party. Clearly not for the faint of heart, but eh, treasure.

So grab a spear and get ready to stab, stab, stab and stab some more! Because even if you go at it by your lonesome, there’s still piranhas, ticked off sea turtles, and many other things to deal with, as you go about diving for loot. Loot that comes in the form of shiny precious coins, and not a few either. Unless you’re doing a bad job. In which case, maybe bringing a friend (or two, or three!) along isn’t such a bad idea. Sure, you’ll be competing with everyone else over the treasure – but that also opens up a wealth of options, like, say, waiting until someone has collected a lot… and then take them out and steal their valuables! Muahahaha. What? It even says so, right on the Steam page: “When treasure is at stake, there are no heroes!”

Race your way through challenging stages while contending with deadly creatures and dastardly opponents to collect the most treasure.

Oh, and fighting for your life – whether it be alone or… I did mention multiplayer, right? – to amass wealth got a few ‘upgrades’ recently, what with the 1.1 update and added regional availability for the Switch version. Performance has been improved across the board alongside a brand new zone with new enemies meant to “provide extra challenge for players looking to really push their limits in Aqua Lungers”. All in all, no better time than the present to become one of the Aqua Lungers and embark on some hazardous treasure diving!

Aqua Lungers is available on Steam and Switch, carrying a $12.99 price tag.