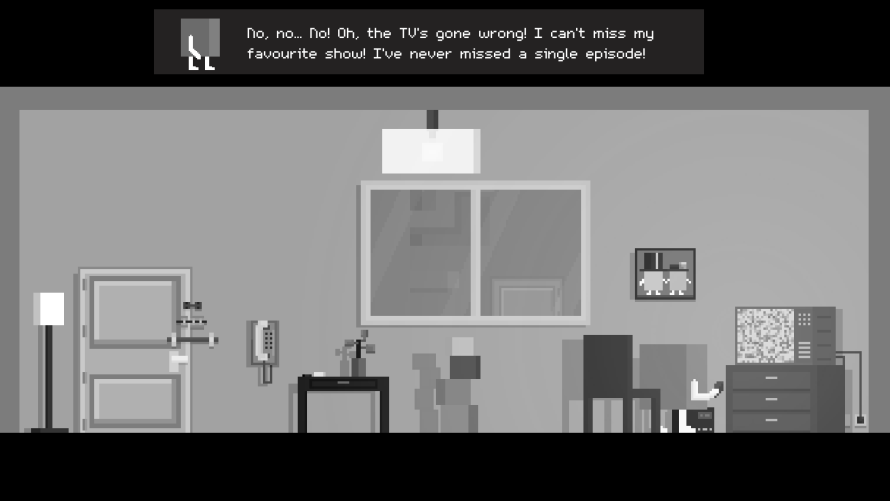 Nothing matters but the TV in the world of Antenna Dilemma. Nothing. At all. TV is good. We like TV. All hail the mighty TV! But what if, for some reason, your TV suddenly acts up? As our tale begins, C432632 experiences this very problem, and seeing how his favorite show is about to start, there’s only one thing to do: fix it… or die trying.

Exactly why our little square protagonist is so hooked on the show in question is for me to know… and not spoil here. The reason will become very clear by playing the game, however, and hopefully, Goloso Games will be continuing this rather peculiar tale at some point. Because at the time of writing it all ends with a “to be continued” and then the credits roll. Ugh.

In a media-driven society in which nothing else matters but TV, will our hero wake up and understand the world he lives in is far from perfect?

Still quite the enjoyable experience though, one that provides players with a glimpse into a world where everything might seem fine and peachy… but it really isn’t. Little by little, what’s really going on becomes quite clear. Or does it? In true point ‘n click fashion, there are inventory puzzles to solve, text snippets to memorize and NPCs to annoy to progress the story. Who knows, maybe you’ll even get to bend the rules a little? Do be careful if you opt for this route however, for who knows what might lie behind the curtain? (Not a new TV, that’s for sure.)

After playing through the entire thing, which took approximately forty minutes, I found myself wondering if C432632 wouldn’t actually be better off without his TV? Then again, if he was able to just go cold turkey on being a couch potato, there wouldn’t have been any Antenna Dilemma, ya know? And that would have been a darn shame, for in spite of its rather abrupt cliffhanger ending, it did provide a good time with laughter and eye-rolling in (almost) equal amounts. In fact, the only thing I downright disliked was those pesky math puzzles. Math sucks. No one likes math. TV on the other hand… blessed be thy maker!

Antenna Dilemma is available on Steam and itch.io, for free.