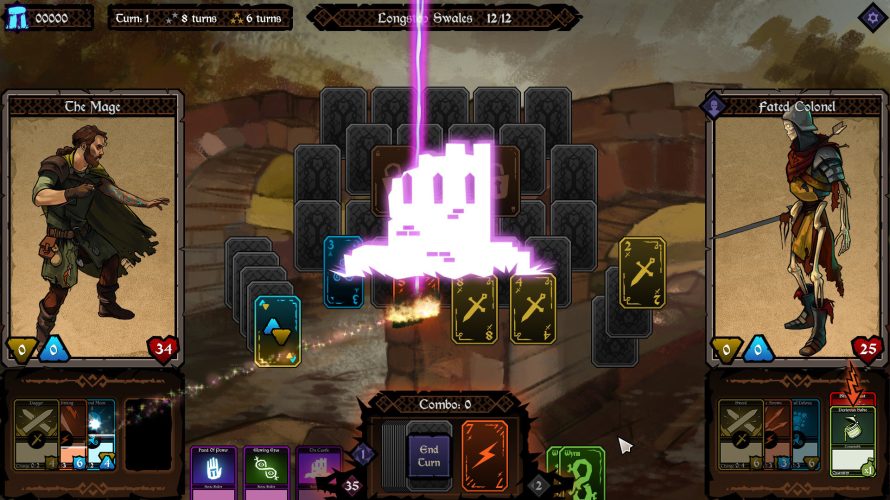 I’ll admit that the premise of picking a fight with an evil entity that has already won… seems kinda… well, odd. Then again, perhaps Ancient Enemy‘s protagonist is an optimist, looking to restore these cursed lands from their demonic clutches? Eh, whatever the case, I truly hope fortune shall favor the bold as I suspect the odds will be stacked rather heavily against him (not entirely unlike a deck of cards).

Oh, speaking of which: those with a keen eye will have noticed it already, but just in case – battles in Ancient Enemy are waged with cards, and in something resembling Solitaire at that. Spells and special attacks are still very much on the menu, of course, only now which are accessible to you at any turn depends on the hand you are dealt, rather than some typical RPG thing like, say, a mana pool or – God forbid – having to memorize an entire spellbook’s worth before each encounter.

You must not only endure, but also rebuild your powers to vanquish evil and fight one last duel against your monstrous nemesis!

That said, as can be seen in this developer-provided gameplay video, you do have a fair amount of ‘RNG manipulation’ at your disposal – even if there doesn’t seem to be any sign of genuine deck building. Every last detail you need to avoid nasty surprises is available on-screen at all times, however, so if anything goes wrong, no blaming it on a lack of information, ya hear? Travel those lands, wage war to the best of your ability, exploit any and all weaknesses of your foes, and maybe… just maybe… you’ll get to face that “monstrous nemesis”, in due time. Maybe.

Ancient Enemy is available on Steam, carrying a $14.99 price tag and a lot of card-based fighting.

Ancient Enemy Trailer
Facebook Twitter LinkedIn Pinterest Tumblr WhatsApp Telegram E-mail
Previous article Heaven or Hell? Harvest Souls and Deliver a Smackdown in 'Obey Me' to the Victor Determine
Next article Build Ever Higher With Paintings, Aquariums and Even Plain Ol' Blocks in 'Stacks On Stacks (On Stacks)' Through Masterful Balancing