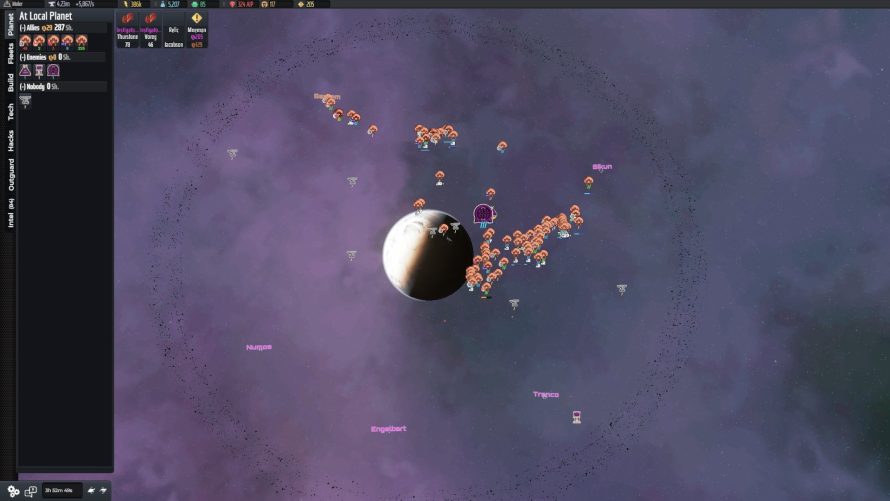 War. War is hell. Doesn’t matter if it’s waged on land, at sea, in the air, or even in space -- it’s hell. But in a virtual format -- like, say, a video game -- it can be incredibly enjoyable, and that way, no one’s going to get hurt. Save for the AI in AI War 2: The Spire Rises, that is, as the additions in this here sizeable expansion are bound to make thwarting its attempts at conquering the entire galaxy even more fun. WAR!

But first, a disclaimer of sorts: I have yet to actually play AI War 2 or its precursor, so do keep that in mind as I attempt to decipher what The Spire Rises adds to the already massive sci-fi strategy title. In case some of what you read following this paragraph doesn’t quite add up, now you know why.

Right. Anyway, first and foremost, the thing most fans are likely going to be excited about: two new playable factions, one of which was actually in the original AI War (or its third expansion, rather) -- The Scourge and Fallen Spire. Both of these play quite differently too, the former bringing cloaking technology while the latter… well, how does “epic battles to capture the spire relics” and some “Really Big Weapons” sound? Yeah, that’s what I thought. Oh, The Scourge also gets a ridiculously big ship. Because those are always great -- long as they’re on your side.

Best of all, you can mix and match which factions -- if any -- are included when setting up a new game, ensuring that just because you own The Spire Rises, you aren’t forced to feature The Scourge and Fallen Spire in every single skirmish from that point onwards. Same doesn’t go for all the new Arks, turrets, additional capturables, and… who knows what else? Then again, all of the other new features are pretty darn groovy, so turning them off would be a tad silly. Just a tad. Like, who wouldn’t want performance improvements and prettier lighting? Or fire teams for the AI, making it “vastly smarter in general”? Wait… that last one. Oh boy.

AI War 2: The Spire Rises is available on Steam, GOG.com, and Humble, carrying a $7.99 price tag. Base game required.

AI War II 1.0 Launch Trailer
Facebook Twitter LinkedIn Pinterest Tumblr WhatsApp Telegram E-mail
Previous article Blast Your Friends to Smithereens With Fish, Bug Zapper and Anvil Alike in 'Baron: Fur Is Gonna Fly'
Next article Hope is What You Make of Him Throughout the Twisted Worlds of 'Infini'