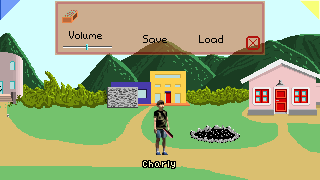 Don’t ya just love all the stuff that comes with a new year? I mean, right now, Awesome Games Done Quick is well underway, speedrunning like there’s no tomorrow, and on top of that… AGS Awards 2018 are right around the corner! But for now, a closer look at its nominees will have to do.

Now, while it would be absolutely amazing to have every Adventure Game Studio title from 2018 nominated for an award, I very much doubt that’ll be the case. Instead, we’re going by creator submissions in this thread (which I’ll use to update this post as new submissions are added, right up to the point where voting commences). So what are you waiting for? Get to pointing, clicking and playing some groovy games! 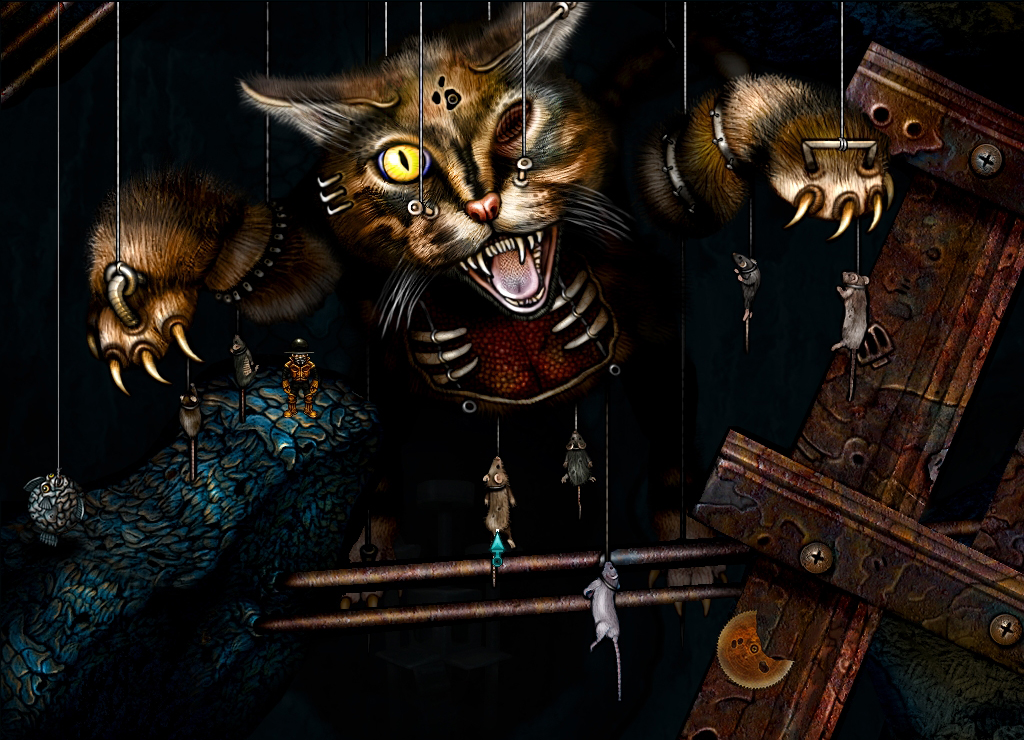 The Knobbly Crook – The Complete Misadventure (Bavolis)
A ridiculous journey into a fantasy world where Rock, Paper, and Scissors are forces of nature. 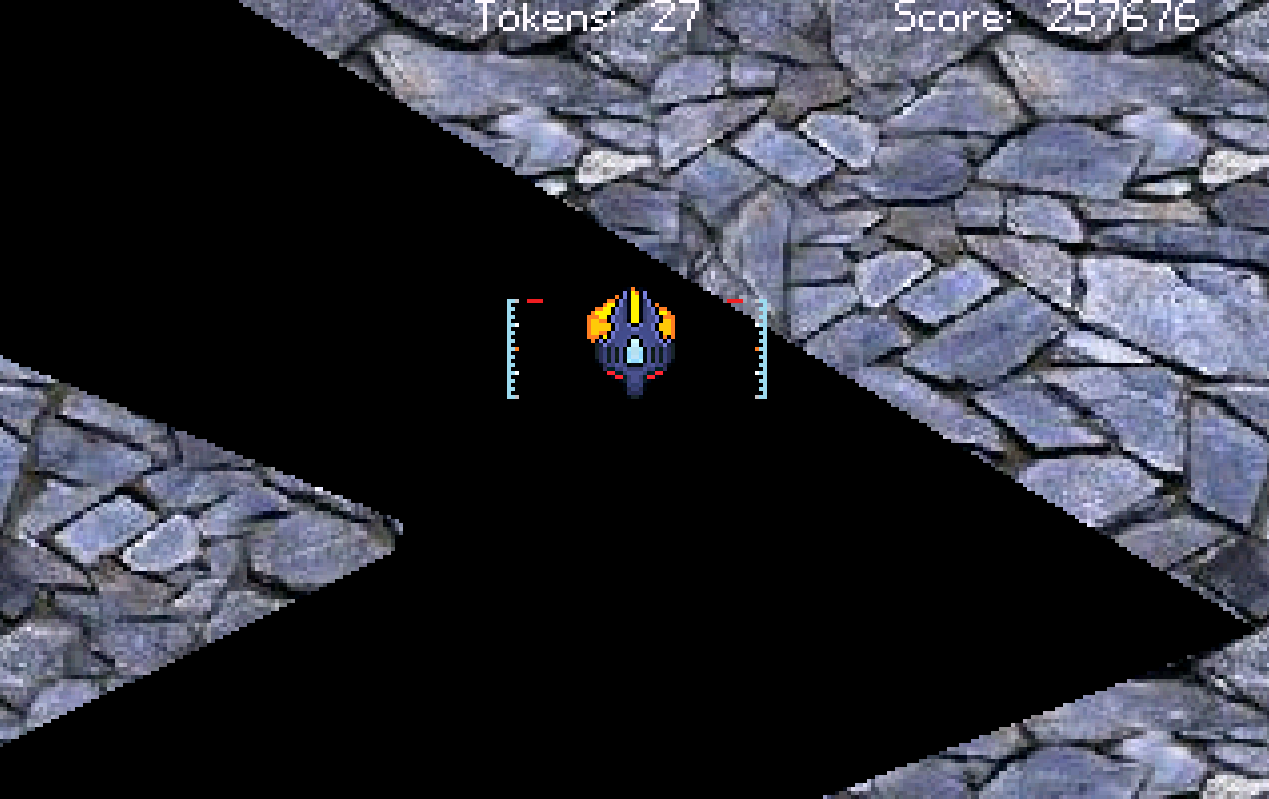 Space Tunneler Deluxe (CaptainD)
It’s a retro arcade game where you have to, you know, avoid crashing into walls. With the way the controls work however, you need to employ strategy as well as have decent reflexes. 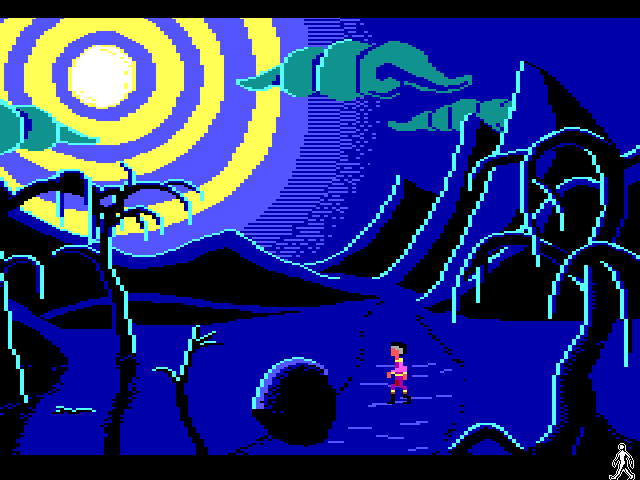 Adventure: Welcome to the Genre (Akril15)
Thalia James’ job in the Computer Game Maintenance Squad is seldom an easy one. After one of her assignments nearly ends in disaster, she is asked to track down five characters believed to be responsible for a series of criminal activities throughout the 2D adventure genre. With that to grapple with as well the mysterious condition from her past that has inexplicably resurfaced, the first annual Adventure Game Awards and the grand opening of something called the Mega-Game, this adventure is bound to be anything but mundane. 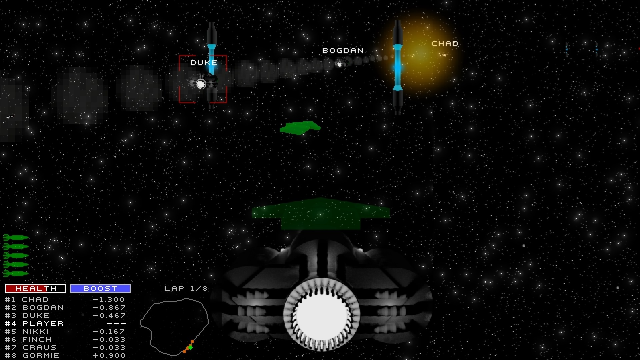 Racist (Jack)
Racist is an action game for MAGS January that simulates momentum, thrust and collision to create a fast kinetic racer. Sprites pre-rendered from multiple angles are used to create a fake 3D, 2.5D environment. 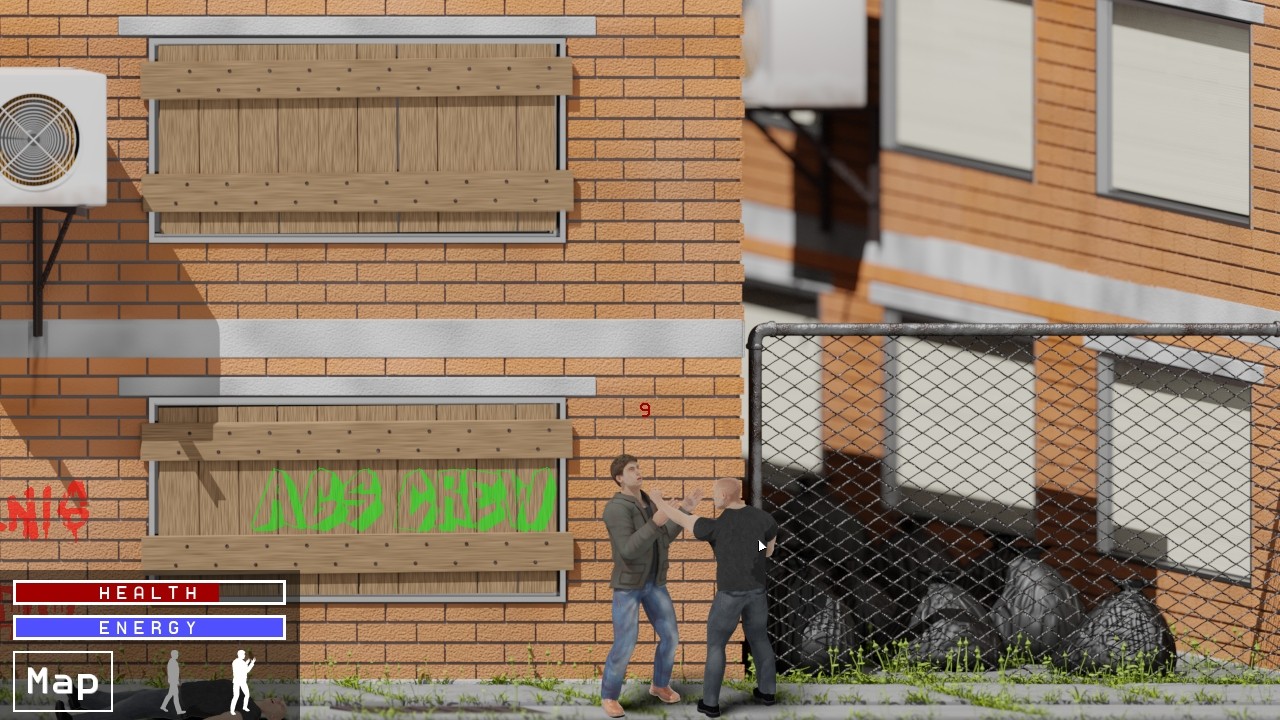 Fists of Murder (Jack)
Created for MAGS August, Fists of Murder is an action-adventure mix that includes a simple fighting system. Use the health and energy bars to beat up to three opponents in sequence. 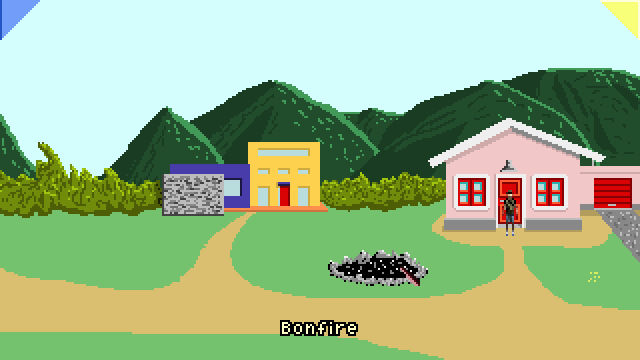 Ice in the Air (Cassiebsg)
Charly has just been told he needs to play outside as long as the weather is good. However what he wants is to go back in and play on his computer. 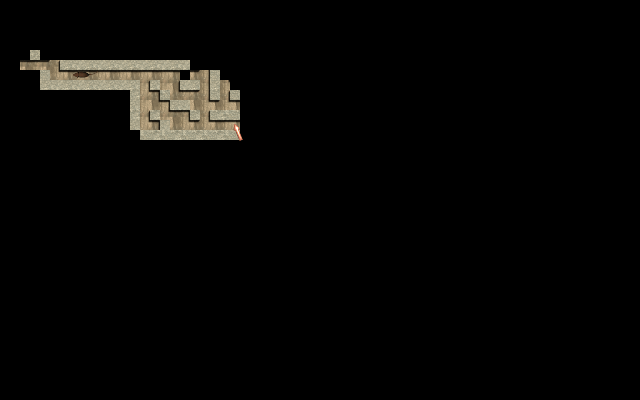 Lab Rat Maze! (Cassiebsg and Gurok)
Ever wondered what a lab rat feels when someone places him into a maze? Well, now you no longer have to wonder! Experience it for your self! Feel frustrated by the unfair tasks, extreme level of memory and other skills requirements that evil humans put poor rats through! 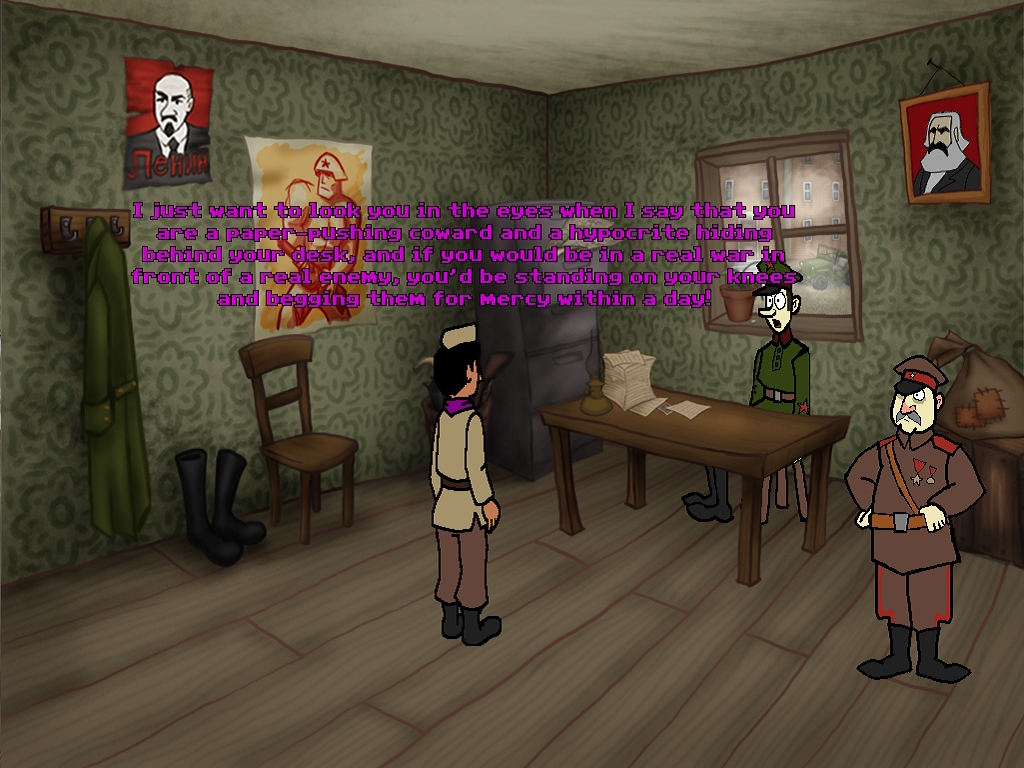 Commissar’s Contrapasso (Blondbraid)
This is the story of an arrogant Soviet commissar, whom after an accusation of cowardice personally takes the lead of a charge that goes horribly wrong and leaves him trapped behind enemy lines.
What follows is an adventure and a story about wits, courage, pride and redemption and the commissar will need your help to survive! 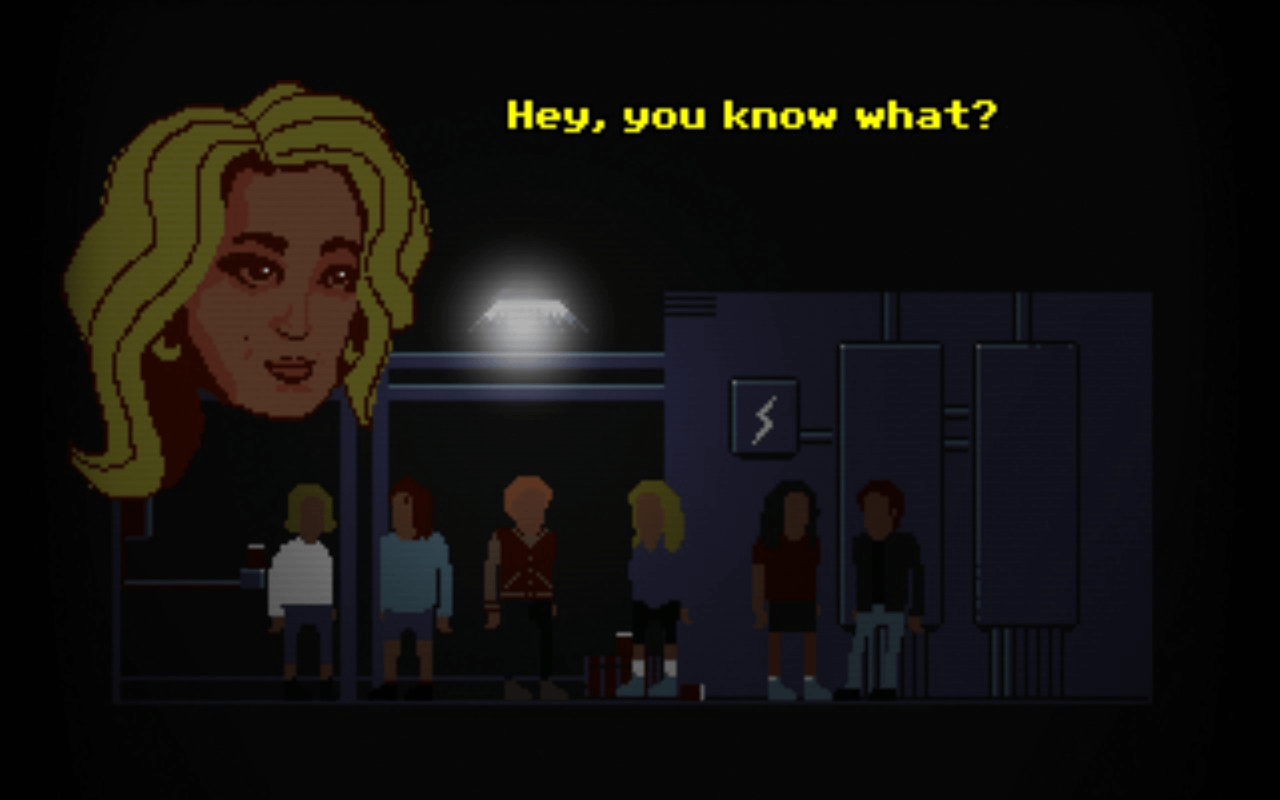 Football Game (shaun9991)
East Bend, Purchase County. 1987.
You are Tommy, a local high school football hero in the town of East Bend. It’s game night for the Purchase County Turbines and your sweetheart is waiting in the bleachers. Join Tommy for a night you won’t forget…
Something is amiss… 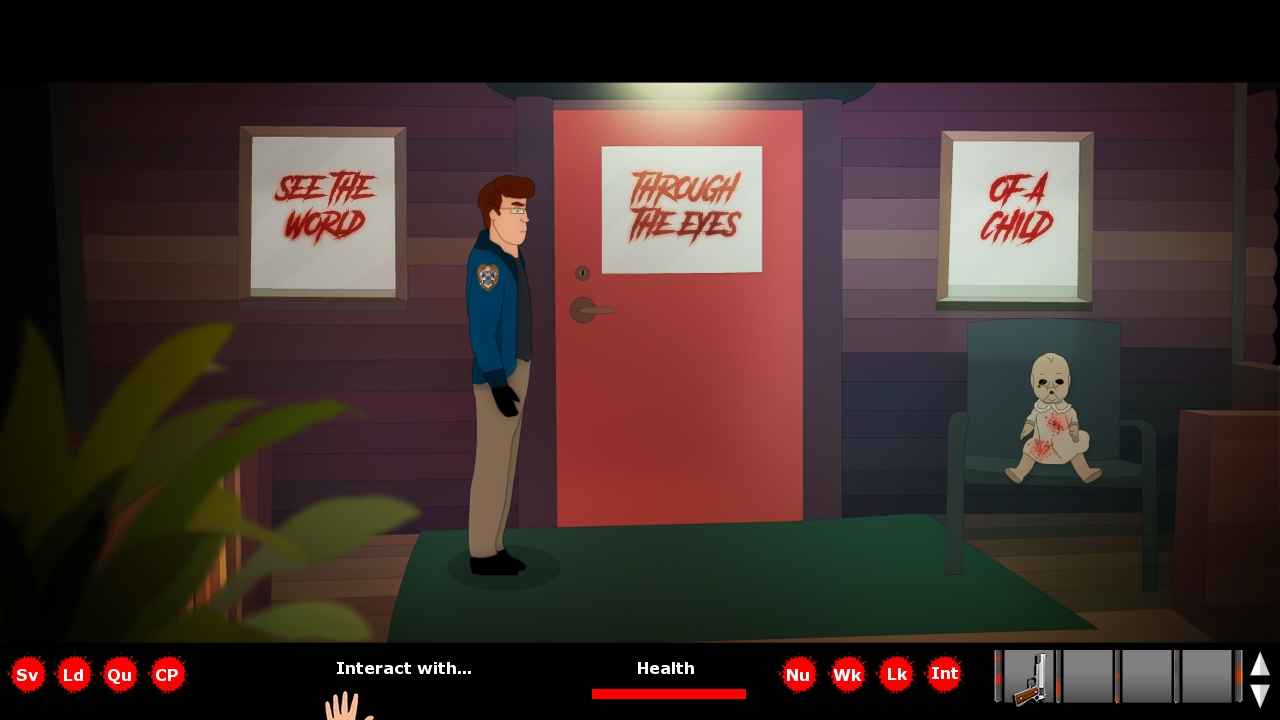 Dr. Chuckles’ miniature world of madness (Slasher)
You are officer Marc Delago. You’ve been tasked with reopening a cold case leading back to the 80’s, involving a string of missing people in the Sleepy Oak area, after new evidence matching the M.O. of the deranged maniac behind the kidnappings came to light.
A heavily wounded and psychologically distressed man claiming to be an escaped victim of the kidnapper has provided a compelling statement that could lead you straight to his captor.
Will you finally bring justice to the homicidal mad man behind these kidnappings?
Are these kidnappings in any way linked to the disappearance of the governor’s daughter?
What hidden dangers will you encounter along the way?
Find out in Dr Chuckles’ Miniature World of Madness 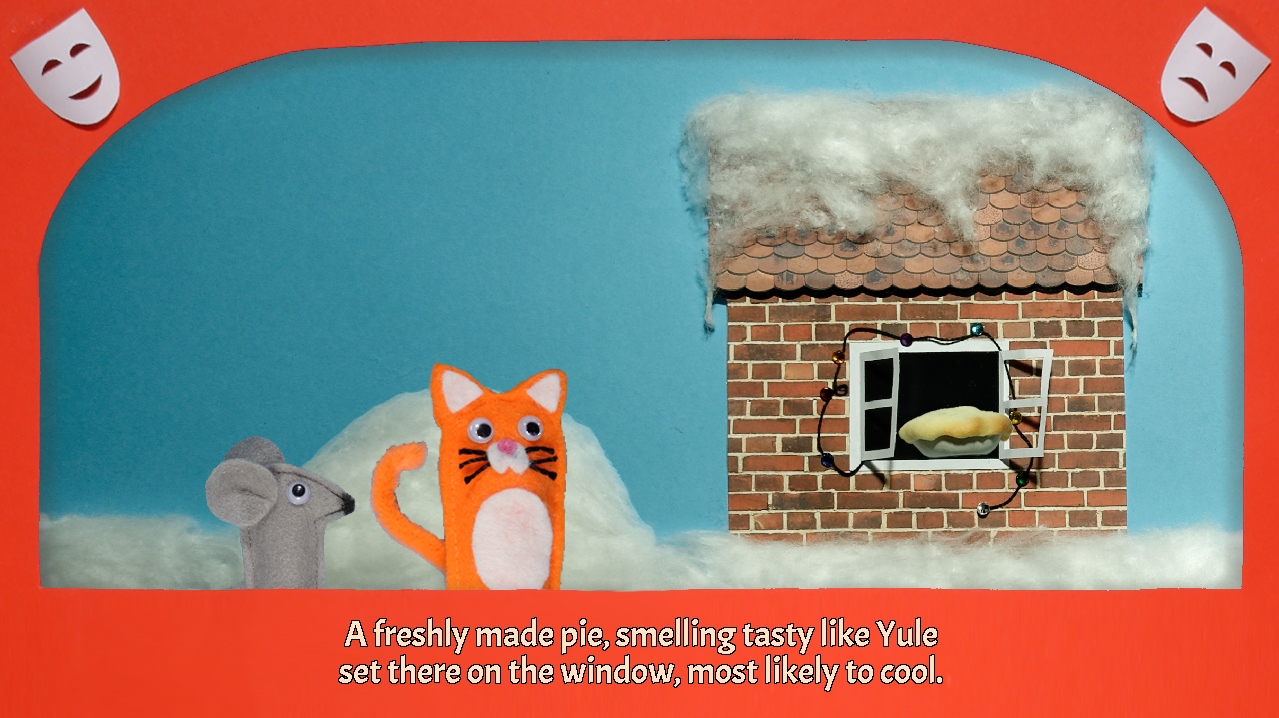 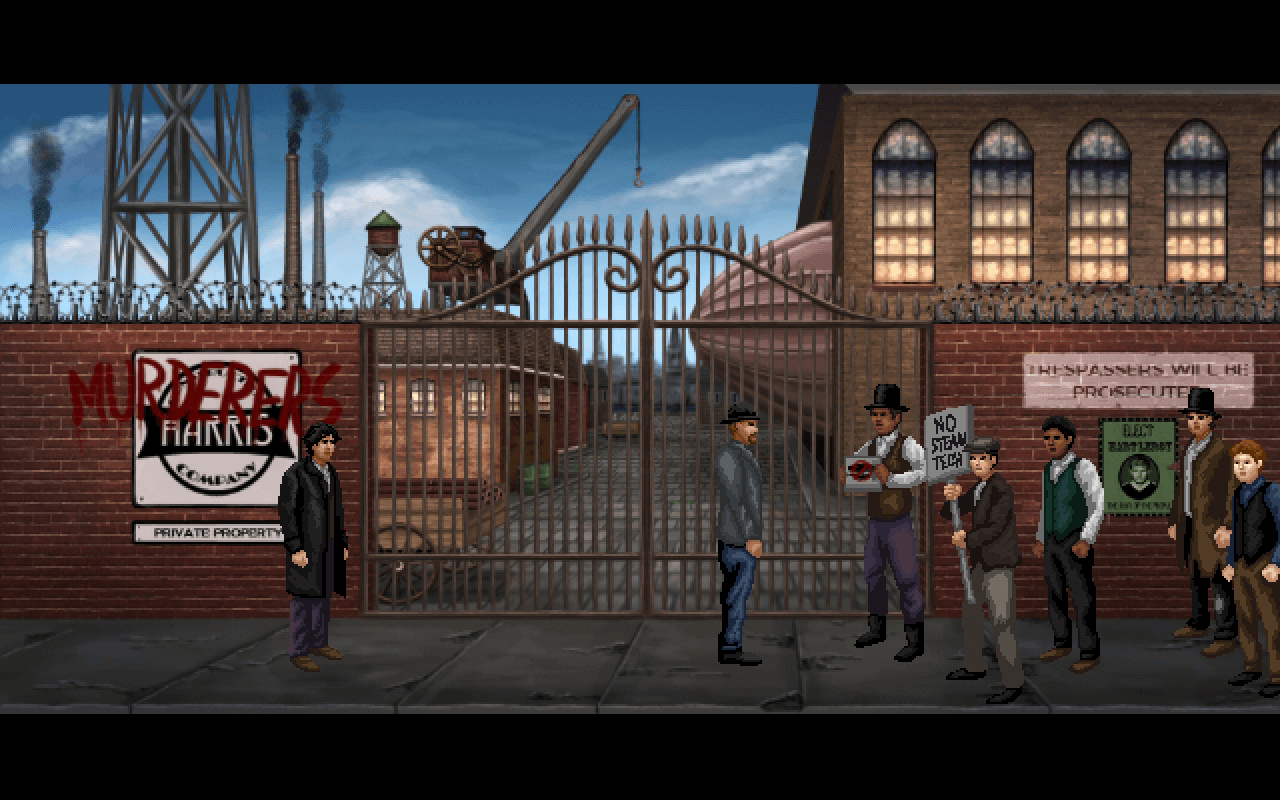 Lamplight City (Grundislav)
The Gateway to Vespuccia, the City of Air and Light, Lamplight City—the thriving port city of New Bretagne is a beacon of progress and industrial advancement in the New World. Yet beneath the promises of a shining 19th-century future, the city rests upon foundations of poverty, class struggle, and crime.
For police detective turned private investigator Miles Fordham, Lamplight City’s shadowy corners are just part of the territory. But with his former partner constantly speaking to him from beyond the grave, his grip on sanity is slowly loosening. Can Miles find justice for his clients and track down his partner’s killer before his entire world comes apart?
Lamplight City is a detective adventure set in an alternate steampunk-ish “Victorian” past. 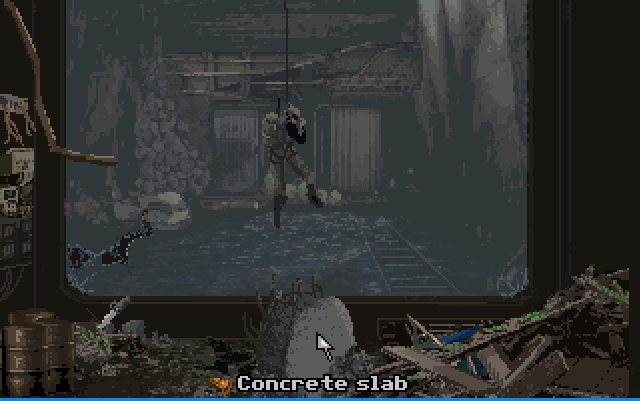 THE SHAFT (Kastchey)
Sgt. Reed has been tasked with descending into an abandoned underground facility, activating the power generator and opening the main entrance.
But things did not exactly work as planned, leaving Reed stranded underground with no means of communication, most of the gear lost and very little idea of what went wrong in the first place and, most importantly, what lies at the bottom of the shaft… 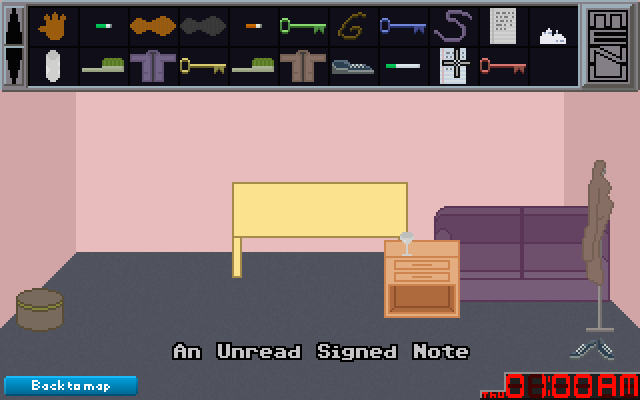 Private Detective (Danzvare)
Private Detective is a procedurally generated murder mystery game, where you must solve randomly generated crimes by finding leads, questioning suspects, and gathering evidence from the crime scene to compare with samples found in the homes of the suspects. It plays a lot like an adventure game, but with a lot more deduction and a lot less inventory object puzzles. 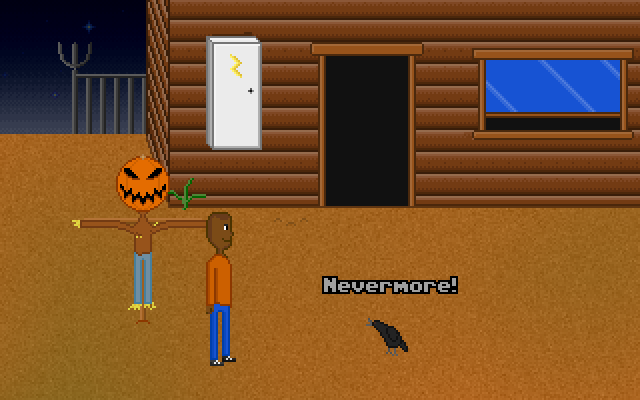 Black Friday (Danzvare)
Somewhere in Maine, five teenagers decided to spend the night at a farm. To goof off and have fun, as teenagers do. But little do they know that they’re being watched by an evil entity intent on doing them harm.
Soon they find themselves being killed off, one by one. Will any of them survive?
Black Friday is a homage to slasher movies in the form of a point and click adventure game. 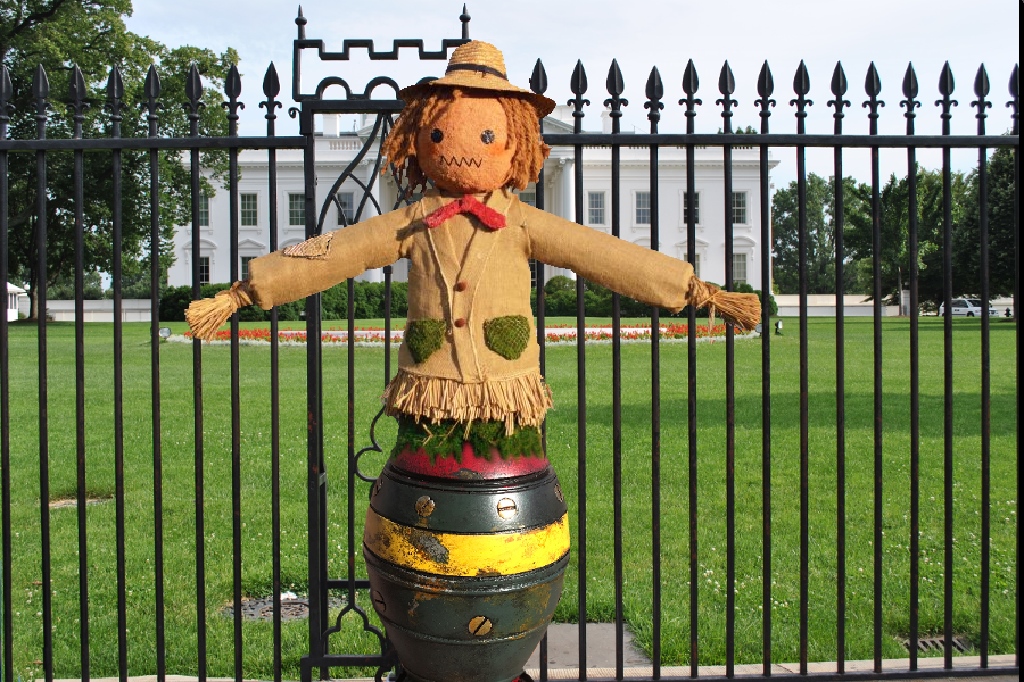 Strawman Bombing Disposal (Mandle)
You are crossing a Washington D.C. road when a truck pulls away revealing something shocking. 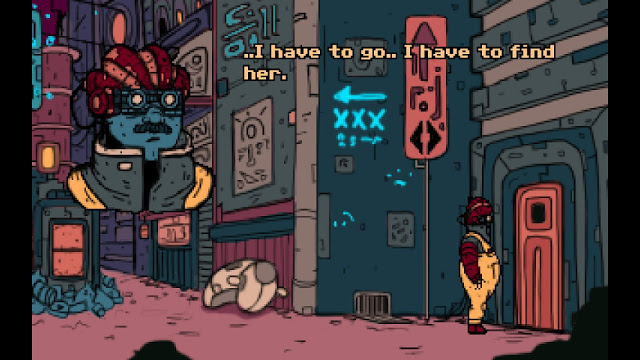 Tales From The Outer Zone: Cyborg Seppuku (The Outer Zone)
You’re a cyborg and your wife has left you. To find her you must leave “The Structure” – a dystopian city in which you are imprisoned.
The only way of escaping The Structure is to rid yourself of your implants and become a plain-skin. 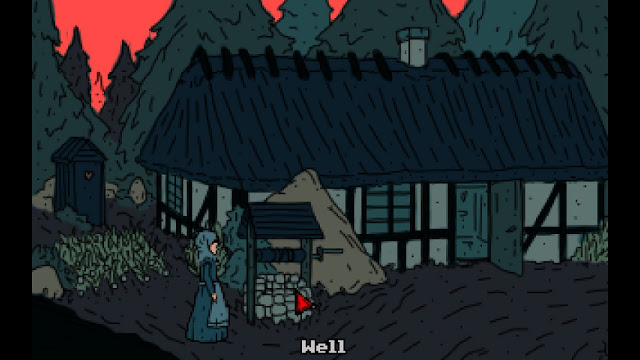 The Goat Crone (The Outer Zone)
Alma has to prepare the yule ham while her father is out in the forest.
But the nightmarish myth of The Goat Crone haunts her and her baby brother. 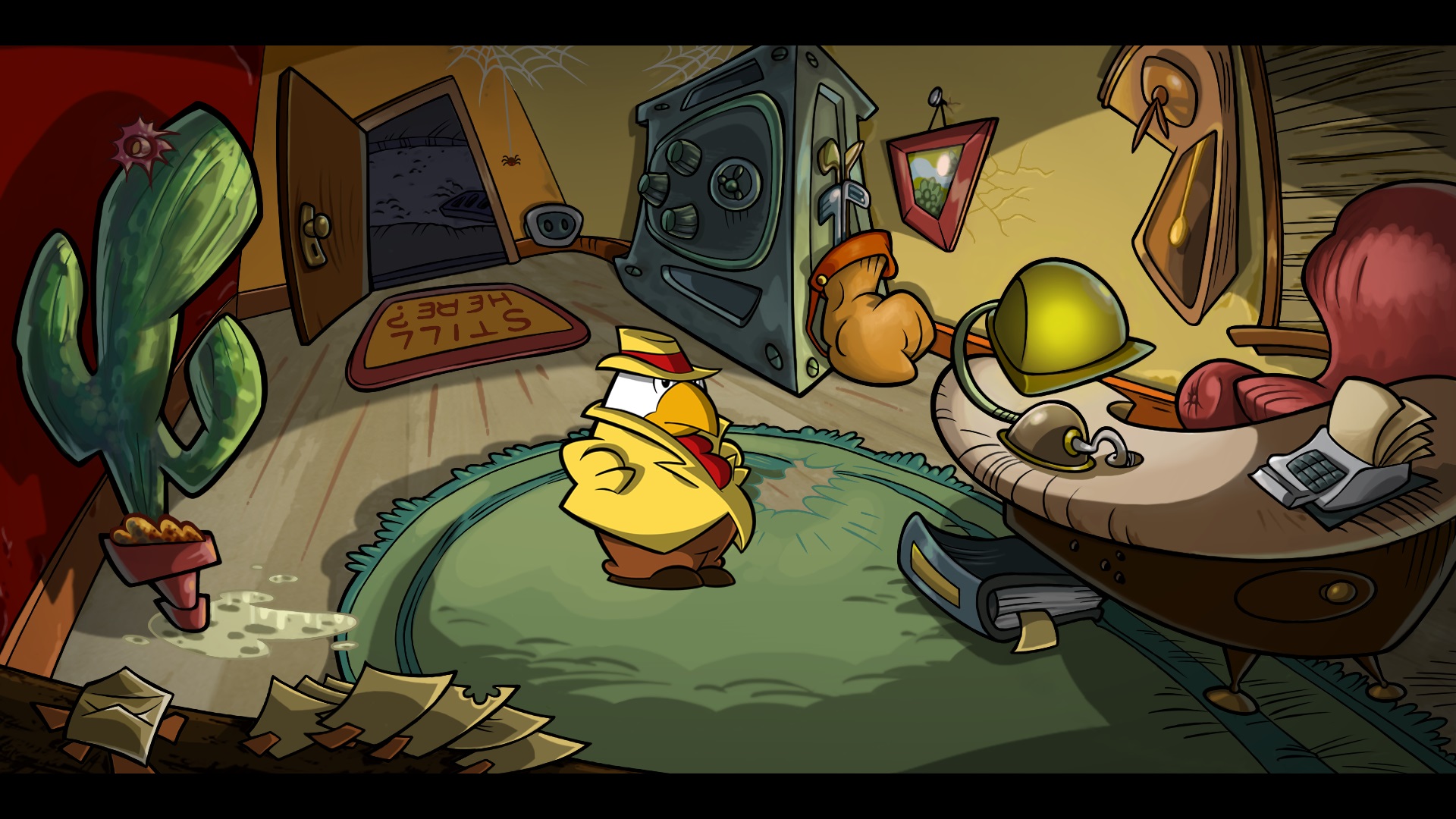 Detective Gallo (Texmurphy78)
Detective Gallo is a point&click comic-noir adventure which is entirely hand-illustrated and hand-animated, whose protagonist is a feathered and grumpy private eye struggling with a very tricky case. The story tells about five exotic plants that have been victims of a serial murder. Thanks to the support of his cactus assistant, it will be up to Gallo to investigate, interrogating bizarre characters e solving puzzles that will put his insight and his patience to the test. 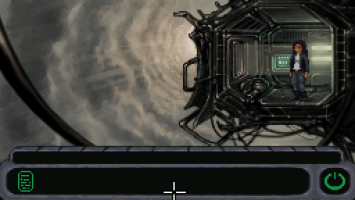 Echo in the Clouds (selmiak) 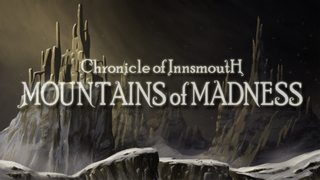 Chronicle Of Innsmouth – Mountains Of Madness 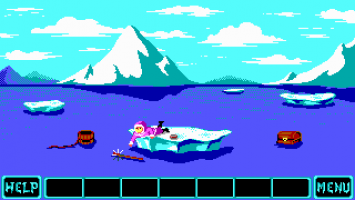 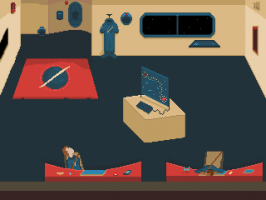 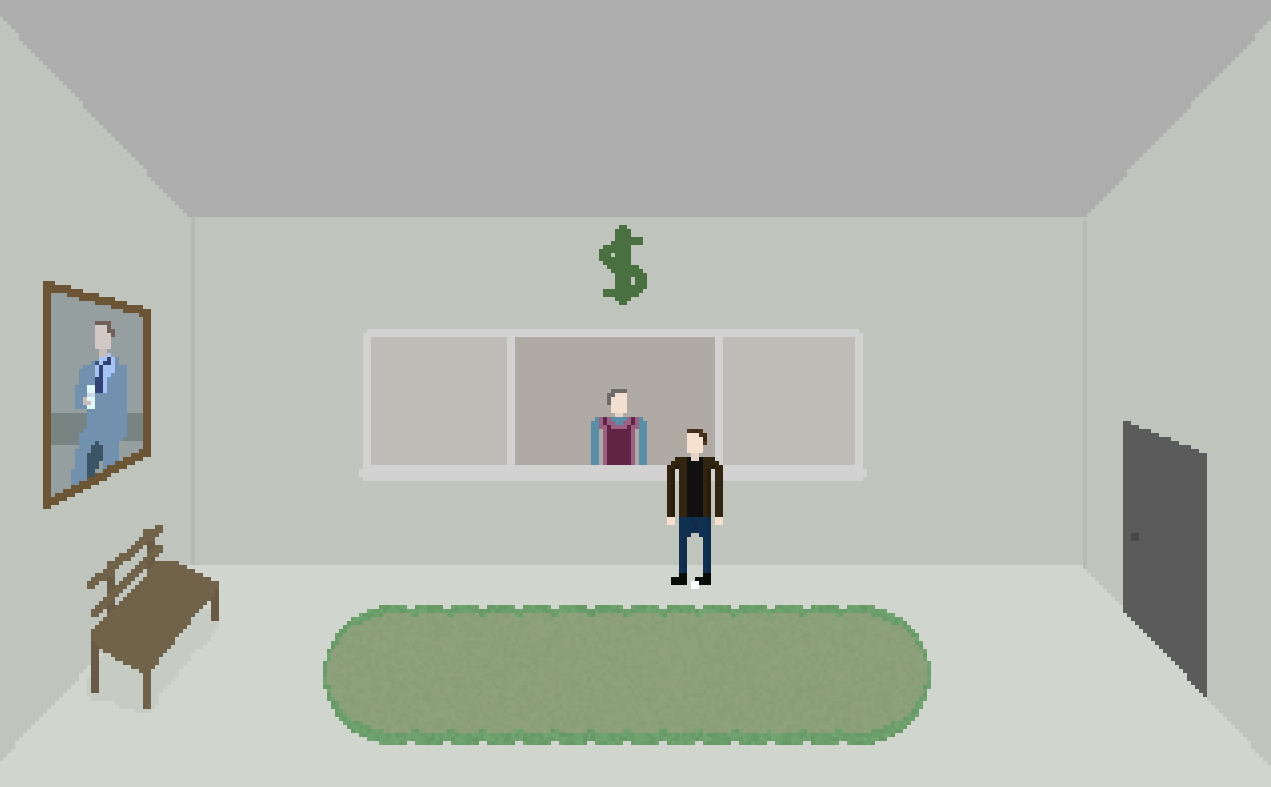 My Dear Globalist Agenda (morganw)
It is my fifth full title, this time about a miserable stock broker and an unemployed musician who while desperately trying to swim out of debt find unlikely answers in the local Ku Klux Klan branch, leading them on an absurd and often comedic adventure. 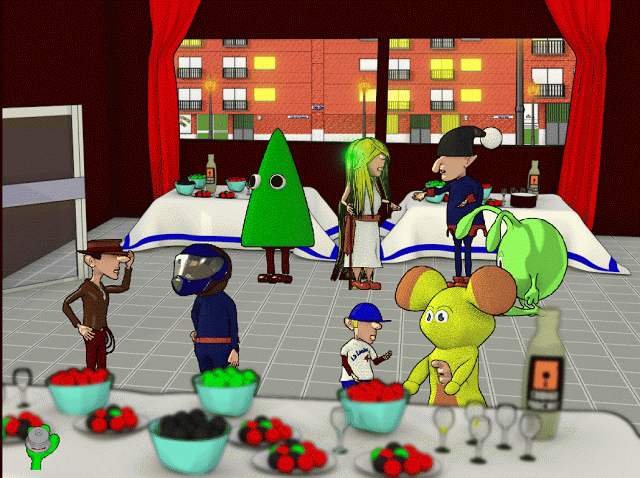 Yago, the Coquerrestrial (Neo_One)
When the director of the famous Galactic Geographic magazine calls you to his office, you can’t believe how lucky you are. You have been commissioned to produce a new documentary on the habits of the earthlings, only one of which has been made in the entire history of the planet Coque and dates back 40,000 years.
You have the makings of an extracococcal documentary filmmaker and this is your chance to prove you’re the best.
However, things don’t usually go as well as you want them to… 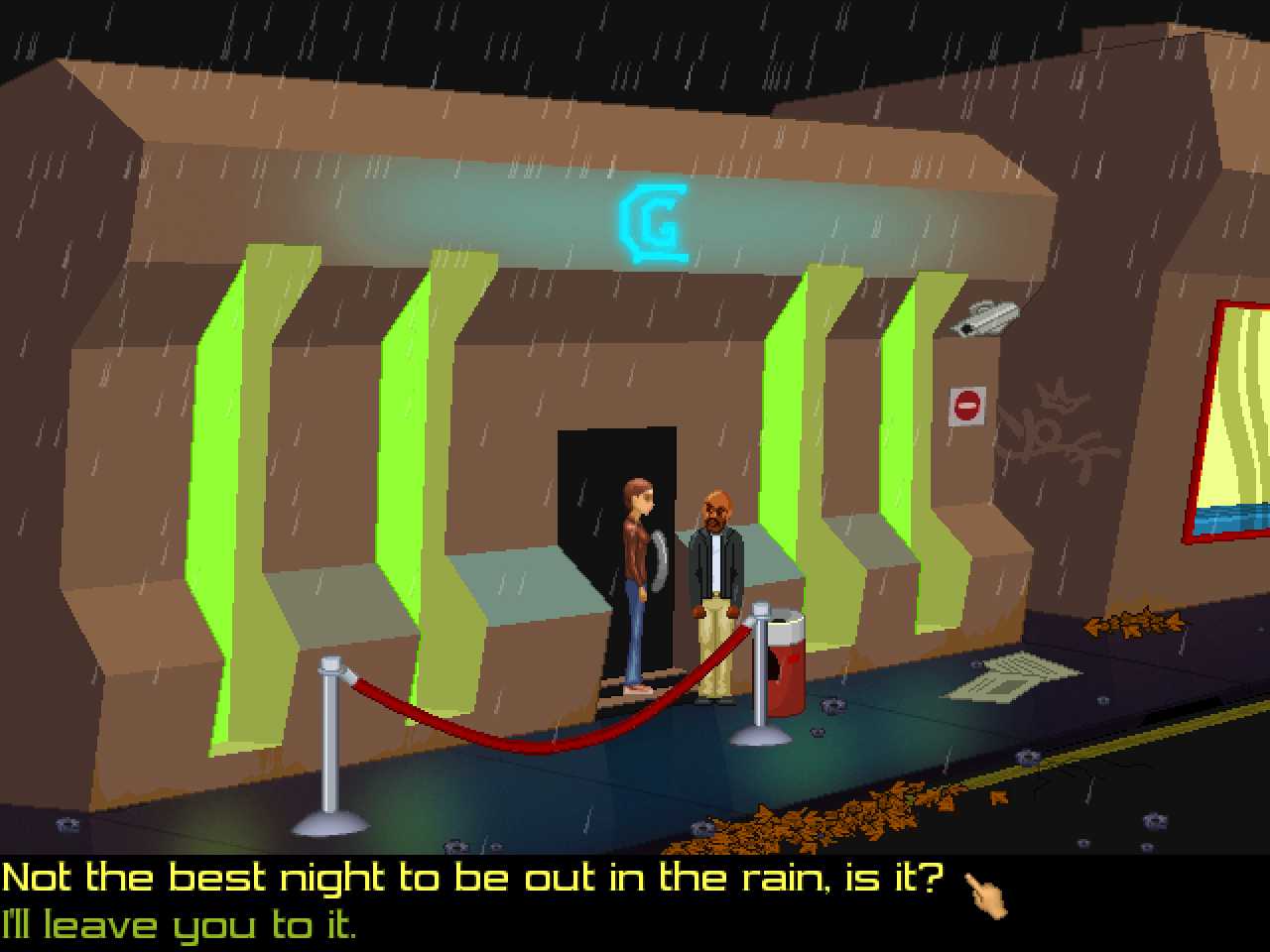 This City at Night (paolo)
Tracey hates her humdrum job at Insurance International, but it turns out there is more going on there than meets the eye. An unknown organisation is plotting a coup that will have catastrophic global consequences, and unless it can be stopped in time, the world will be brought to its knees… 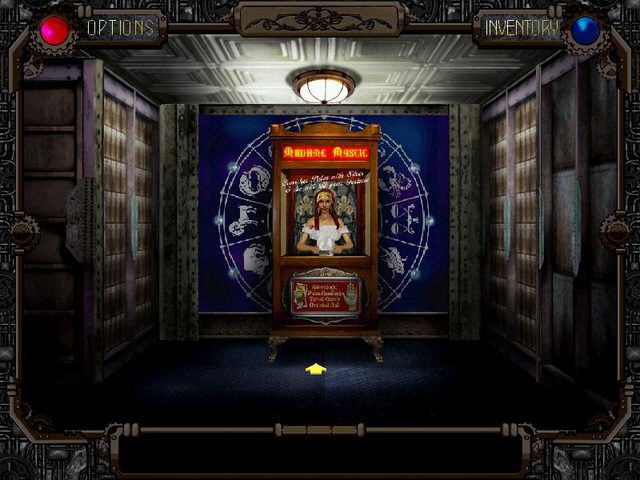 The Clockwork Labyrinth (elentgirl)
A mysterious message on social media lures you into a weird underground complex to rescue a damsel in distress.  You must pit your wits against the labyrinth and find your way to the enigma at its heart?