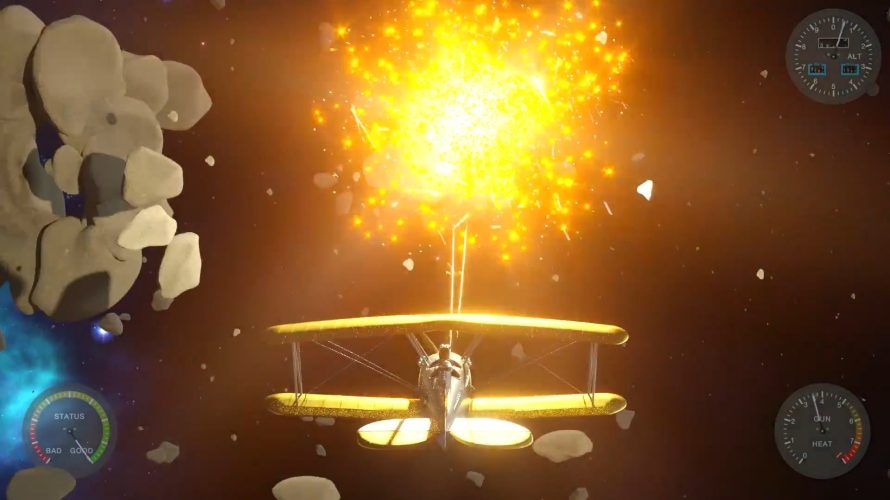 A human being is flying a biplane in outer space. No really. Yeah okay, so maybe that’s only really a thing in Ace of Space, and maybe a trip through a wormhole is part of this story. Maybe. Whatever the case, it’s time for this pilot to start killing aliens instead of nazis, continuing the fight for freedom as it were. On an intergalactic scale. Because aliens are evil.

Exactly why or how our friendly neighborhood pilot has ended up in this mess is unknown at this point. Then again, who cares, really? High-flying acrobatics full of explosive carnage awaits, might even get to blow up a small asteroid or two. I mean, really, the dev emphasizes Ace of Space‘s “absurdist humor and stylized cutscenes” on its Kickstarter page, and if that’s not enough, then I don’t know what is. Already got the whole from-World-War-II-to-outer-space-through-a-wormhole craziness down after all. The scene is set for fun if you ask me.

In a dogfight during World War II, our daring hero, Ace, flies through a wormhole that opened up over the skies of Europe. He emerges from the other side out of control, spinning, and seeing the specs of stars and planets around him.

That said… there’ll be no glory-blazin’ unless their Kickstarter goal of $80,000 is met within the next 22 days (before 6:28 pm CEST on July 21st). But if it is successful, promises have been made of “an entertaining story, a striking visual style” and… something about ancient jokes. A round $20 ($15 for early birds) gets ya an Ace of Space pre-order, but you could always, you know, just wait for December 2017 and grab a copy come launch instead. Either way here’s to a proper good game and a successful crowdfunding campaign.