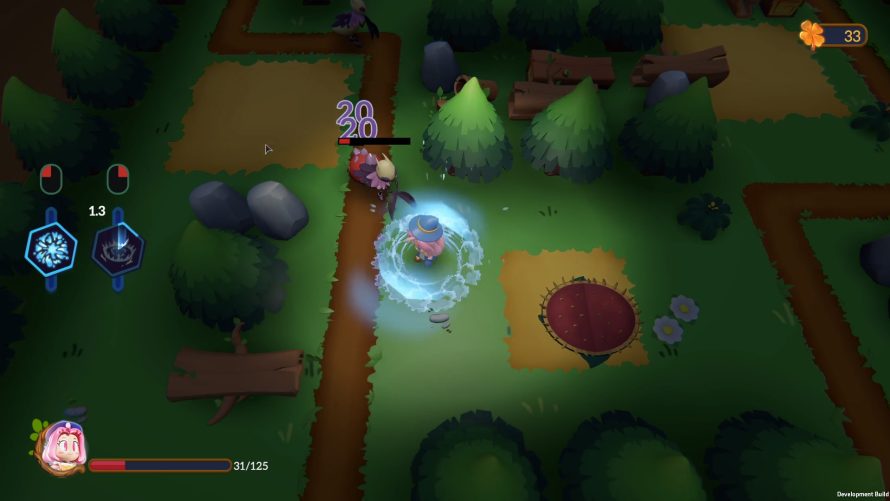 A young witch against a sprawling, corrupted forest and its more-than-a-little hostile inhabitants – what could possibly go wrong? Well, with ever-evolving magic on her side, I suspect Lilith, the protagonist in A Witch’s Tale, will be just fine. Provided the player’s aim is good and upgrades plentiful. If not, eh, maybe next run.

By which I am of course referring to the roguelike nature of the game, complete with different layouts of the forest each time. Clearing an area will provide you with Clovers, a form of currency used at the Spirit’s Fountain to acquire upgrades, perhaps even brand new spells, tilting the odds in your favor ever so slightly with each new acquisition. I’d be very surprised if the three options at each fountain are not picked at random, although at the same time, A Witch’s Tale doesn’t strike me as an overly lengthy game… so maybe just the ones shown in the trailer? Hard to say.

Speaking of which, the cooldown system seemingly in place is a nice touch, to – if nothing else – stop the experience from turning into a button-masher and/or typical twin-stick shooter. Even if that does very much seem to be the case, sprinkled with elements of bullet hell and a system that rewards skillful play. But how did that young witch end up in that dangerous forest in the first place, and why is she so determined to push through instead of, you know, simply going back the way she came? Questions to which the answers (hopefully) lie deep within… A Witch’s Tale.

A Witch’s Tale is available on itch.io, carrying a $1 price tag.