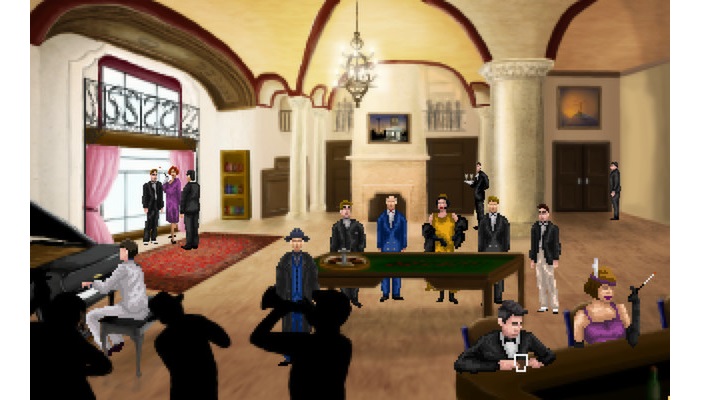 I keep saying that the glory days of point ‘n click gaming is back, yet for some reason, few seem to believe me. That should change with the recent release of A Golden Wake, from Grundislav Games (of Ben Jordan fame), though. Not only does it look amazing, but the game also takes place in a rarely used setting: 1920’s Florida! Groovy.

Originally announced way back in early 2013, A Golden Wake has taken a while to reach completion, but I’m sure it was worth the wait. Ain’t easy drawing, animating and creating a pointy and clicky story, though. Especially not one that takes place in a specific non-fictional era, as that adds a lot of complications – best stay true to the source material, after all. Plus, finding a publisher, so that its creator would be able to actually put the game up for sale, ain’t exactly easy either. On a personal note, I’m glad that Wadjet Eye Games was signed for that part of the process, as they have a fair amount of prior experience with the publishing of adventure games.

Set against the backdrop of the Florida Land Boom of the 1920s, A Golden Wake is a story of an innocent man’s descent into greed and corruption, and his eventual redemption.

As far as the game itself goes, you’ll be stepping into the shoes of Alfie Banks, who’s decided on the perfect career in this particular era/locale: real estate salesman! The market is after all booming, meaning even an average fella like Alfie has a shot at making it big. That is if he can find a way to avoid numerous problems that loom in the horizon, like shady politicians, the Great Depression, bootleggers, mobsters, and other 1920’s Florida issues. It’s a long way to the top and Mr. Banks ain’t gonna get there without your help.