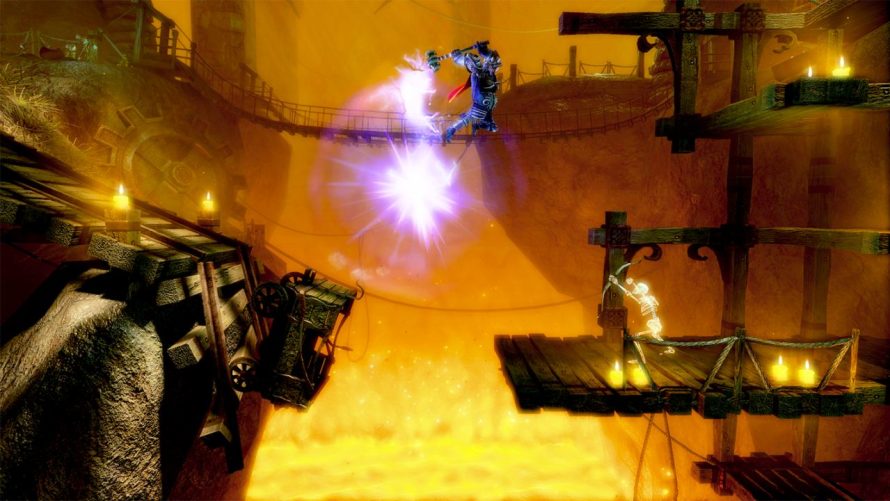 It’s been more than five years since the wizard, the ranger and the (brave?) knight originally appeared in Trine, to… well, let’s face it, critical acclaim. But while it was truly an awesome adventure from start to finish, something was sorely missing; a feature this recent update fortunately added.

I am of course talking about online multiplayer! It was quite popular in the sequel after all, where it made for some seriously chaotic sessions, as people from distant corners of the world banded together. Or rather, I suppose most at least attempted to band, solving puzzles, casting spells, flinging arrows and so on… yet somehow ended up ‘accidentally’ killing each other instead. I know that’s how I spent most of my time in Trine 2, anyway, after finishing the story. Good times.

While being able to take the game online is undeniably awesome on its own, Frozenbyte actually added even more to Trine in this brand new Enchanted Edition. For starters, the entire engine was upgraded to that of its sequel, meaning it now allows for mid-level saving, on top of looking better and shinier than ever, with a slew of additional visual effects. Best of all, it’s free. Completely, one hundred percent, free (for owners of Trine, that is). Oh and if you for some reason feel like playing vanilla instead, just select that one from the launcher, and off you go.

Set in a world of great castles and strange machinery, three heroes are bound to a mysterious device called the Trine in a quest to save the kingdom from evil.

Unfortunately, there is some slightly bad news too: at the time of writing, Trine Enchanted Edition is a Windows exclusive. But according to this blog post, GOG.com and the Humble store will also get it at some point, alongside the Mac, Linux, Wii U, and PlayStation 4 ports, at which point I’ll update the information below.