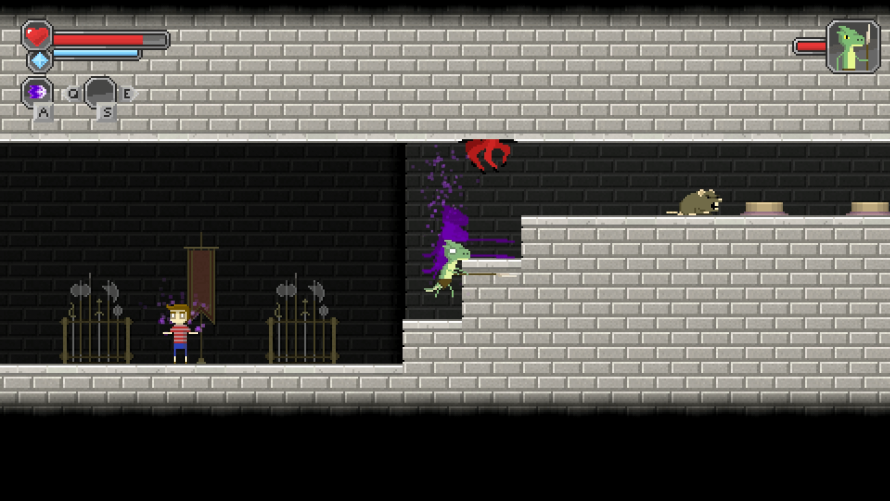 With great power comes great responsibility, or so they say. That didn’t stop me from messing around with life, death, and even time itself, responsibility be damned, however. Where some saw enemies, I saw a stepping stone – one that would take me ever so closer to the exit. How? Oh right, forgot to mention: Trials of Azra has you playing as a kid able to possess the dead…

As the demo kicked off, nothing seemed out of the ordinary, the kid having a ball playing fetch with his dog on a sunny day. But then, little by little, climate changes hinted at a storm approaching. Long story short, my dog died and I now have the aforementioned rather uncanny ability. An ability which, given my newly acquired role of a captive in a strange castle, was a bit of a godsend. Also, something tells me that hooded figure wasn’t exactly my new best friend. Just a gut feeling.

Anyways, onward I went, flinging magical projectiles at rats, lizardmen, slimes, and everything in-between. Ah, did I forget to mention I’d also somehow acquired knowledge of sorcery? Probably brain damage from all that corpse possessing I did. The lot sure served its purpose though, even if I could only ‘grab’ one at a time, holding down switches, navigating narrow passages, and even… something something living bomb. Because, kaboom.

Not thereby saying that the journey was all fun and games because I did find myself stuck once or twice, at which point I’d simply reset the current room and try again. Don’t ya just love being able to rewind time like that? That kid sure is full of surprises, and I suspect even more will be revealed when Trials of Azra is released. Until then, I’d strongly recommend grabbing the demo (Windows, OS X, and Linux) and consider giving it a ‘yes’ vote on Greenlight. Well worth your time.

Rhythm is Key to Surviving the Rather Mysterious Digital Afterlife of 'Nocturne: Prelude'