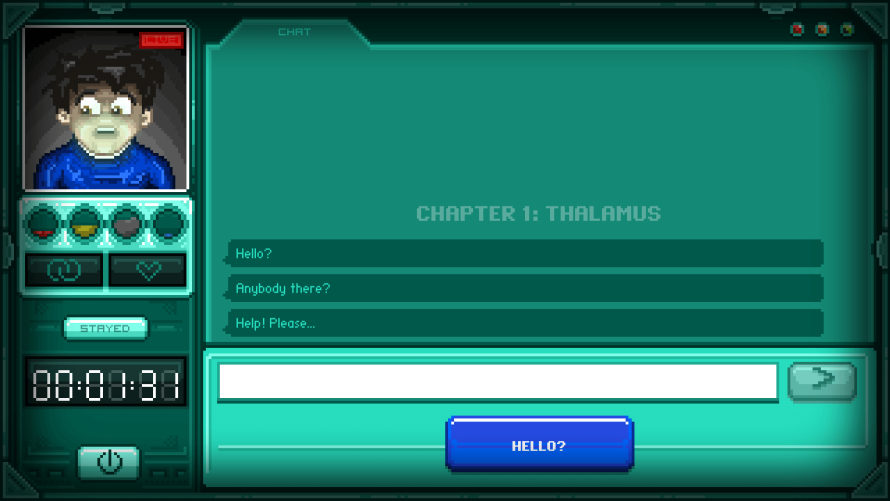 These days it’s not uncommon for the protagonist of a video game to be knee-deep in you-know-what from the get-go. Quite the opposite in fact, but here’s the thing: STAY takes that to a whole new level, what with its unique ‘real-time’ mechanic and all. I’m not just referring to time spent playing either, as the clock will keep ticking while the game isn’t running! Tick-tock. Tick-tock…

Alright. So, now that you know what’s what, let’s talk about Quinn -- the protagonist -- for a second. See, for reasons unknown, this poor fellow has had the misfortune of suddenly finding himself locked up in a dark room with nothing in it, save for a computer hooked up to a chat room. Escape? Yeah. He wishes. If it was that easy, there wouldn’t much of a game in STAY, now would there? Oh, and that thing I said about how the clock’s always ticking? That goes for while you’re actually playing too, even if you aren’t active, as it were. Uncanny stuff.

What would you do if a stranger’s fate rested in your fingertips? And how would you cope if every second counted?

Needless to say, given the scenario he’s been dropped right into, Quinn is uneasy -- to say the least. To the point where trust doesn’t come easy, if at all! Thing is though if he’s ever to achieve sweet freedom, you’re gonna have to work to establish a bond of some sort. A strong bond, and fast at that as there’s no telling what might happen next; or potentially worse: what Quinn himself might do next!

With a slew of different endings -- more than few involving Quinn’s gruesome death, I’d wager -- and a story that takes place over no less than twenty-four chapters, replay value’s definitely present and accounted for. Even more so if you want to get to know exactly what’s going on and who Quinn is, because… well, there’s just not enough time to do everything in a single playthrough. Never enough time. Doesn’t matter how long you decide to… STAY.

STAY will be available on Steam from April 18, carrying a TBD price tag.