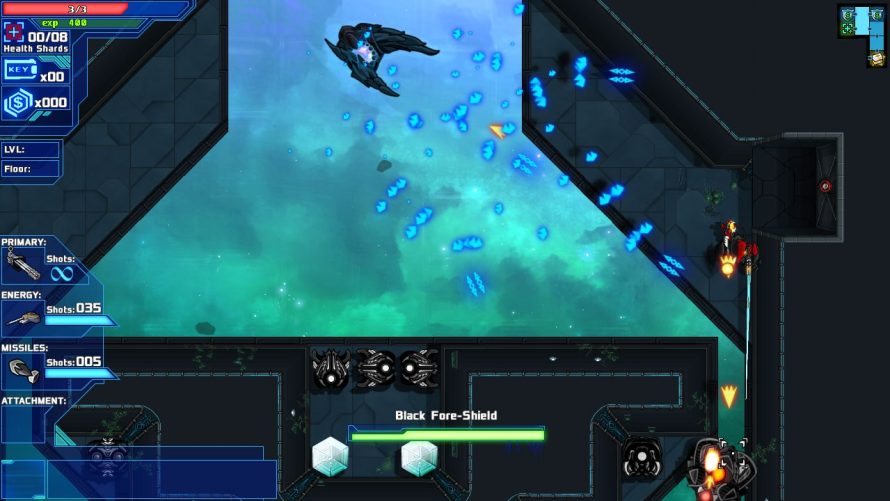 Whether it be for science, out of curiosity, or you just enjoy kicking some serious ass, it’s time to delve into The Megalith -- which is likely going to get you killed. But that’s fine. Quite alright. I mean, you do lose (almost) everything upon falling in Starward Rogue, but no pain, no gain, right? Right! Also, someone’s in need of rescue, so whatever your reason for breaching the unknown, do keep that in mind whenever you’re not busy blasting stuff.

So, a roguelike bullet hell, in space… which has you piloting a mech! Or, well, the head of a mech. Kinda. Anyway, how can you not immediately find the prospect of that combination exciting? Ain’t exactly Arcen Games first trip to those genres either, as Bionic Dues -- currently free on Humble, I might add -- features a similar setup, being a turn-based roguelike that has you piloting a mech and all. Not a bullet hell though. For that, you’ll have to spend some hard-earned cash on Starward Rogue instead.

Seems well worth the investment to me though, especially in light of the creator having a lovely history of showering their titles with post-launch additions/updates, leaving me to think this one will be no different. That and Starward Rogue comes with modding support right out of the box, which is bound to add longevity. Oh, and anything the community cooks up for the game has a shot at being fully integrated in a future update, “if it makes sense within the larger scope of the game”. Very groovy.

We had a very tight timeline, so as far as the rest of the world is concerned this game is coming out of nowhere. After months of crunch-mode development we’re still finding it hard to stop playing after each run, so hopefully you enjoy it as well as we do!

As for the game itself, like any good roguelike, most things are tied to each run. Keyword being ‘most’, since there is some sort of “meta-progression”. Although far as I can tell, it’s mostly (again, mostly, not entirely) related to an overall completion percentage and story elements, rather than, say, Rogue Legacy style upgrades. There are a wealth of upgrades, weapons and different ‘suits’ to acquire, some of which will really mix things up, further increasing replayability (which, let’s face it, is pretty important for a roguelike…). So tread carefully and choose a fitting difficulty -- no one’s going to mock you for playing on the lowest, after all. Well, some might, but just ignore them. Your mech, your choice, in this groovy genre hybrid.

Starward Rogue is available from Steam and The Humble Store, carrying an $11.99 price tag.
Bionic Dues is free on The Humble Store (DRM-free + Steam key) until January 23rd, 10 AM PT.