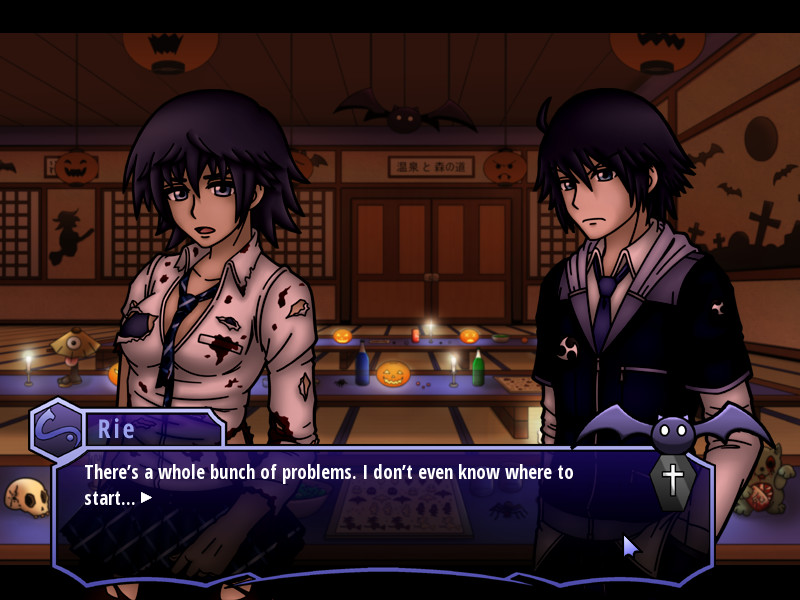 It was supposed to be a fun little gathering of friends on All Hallow’s Eve at a secluded mountain resort, but fate had other plans for this particular group. Plans involving a murder most foul, turning a fun-filled getaway into a forced whodunit experience, and… everyone’s a potential suspect. Everyone. Innocence? Ha! Not in SHINRAI -- Broken Beyond Despair.

Whether the culprit will be caught is entirely up to you, or rather, the choices you make in this mystery visual novel as classmates are interrogated and rooms searched for clues. Keep in mind however that unlike most other tales of similar nature, this one lets you accuse just about anyone -- not just the actual killer! So tread carefully and be sure to don that fancy thinking cap, eh?

Fortunately, the game does make it easy to keep track of information as everything is automatically scribbled down. Between the notebook and character profiles, all that has been discovered thus far is readily available, leaving only one problem: piecing it all together. I mean, it’s one thing to question someone, anyone can do that. But even if you ask all the right questions and get valuable information, it won’t do much good unless interpreted properly. Just something to keep in mind.

With a grand total of five endings, no less than ten potential culprits and an entire resort to investigate… you’ll definitely have your hands full here. Oh, and according to its creator, the story spans 150,000 words, making for quite a lengthy thriller. Best of luck, “detective”.

SHINRAI -- Broken Beyond Despair is available from itch.io, Steam, at $14.99.