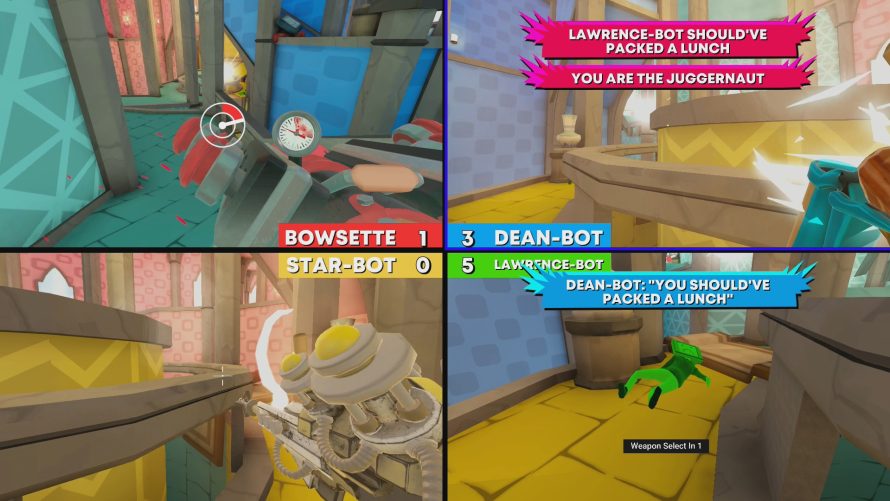 It’s one thing to try and hit other players in a first-person shooter craze, but… what if everyone’s actually invisible? As in, completely hidden from sight, no silly gadgets or vague outline to discern your target from the environment. Yeah. Crazy? Probably, and yet that’s the core component in upcoming Switch title, Screencheat: Unplugged, a multiplayer shooter which requires players to screencheat (get it?) to spot their adversaries and blast them. Before they do the same, preferably.

Quite the lovely little twist on deathmatch, I’d say. Oh, and there are a slew of other modes too, some of which are more than a tad silly: My First Deathmatch, Murder Mystery and Hillcampers, to name but a few. Not quite sure what each of those brings to the table, although in the case of Hillcampers, I’d wager inspiration is drawn heavily from popular genre staples like King of the Hill and/or Domination; either of which are bound to be an absolute riot with the unique gameplay of Screencheat: Unplugged. Plus, if you don’t like some setting or other, simply customize and tweak until it suits your needs.

Master a wide variety of weapons and engage in fast and frantic combat with up to four players locally or with bots, then challenge yourself in the tricky time trials mode. With colourful maps, unique modes and a huge number of customisation options including wacky mutators, Screencheat: Unplugged is the ultimate party FPS.

Now, the list of things that sets Screencheat: Unplugged apart from the original 2014 release (remember?) is actually rather extensive: visuals have been overhauled “with the portable screen in mind”, maps have been added and/or changed, weapons have been “remastered” (wait, what?), the UI receiving more than a few changes too.

Ah, and we mustn’t forget about its brand new soundtrack, “introducing a fresh and mischievous medley of energetic tracks”, or how the game is actually playable with a single Joy-Con™, dual Joy-Con™, and of course, the Nintendo Switch Pro Controller. Plenty of ways to play this chaotic party shooter, bots gladly filling out the ranks to ensure there’s always enough targets, in Screencheat: Unplugged.

Screencheat: Unplugged will be on the Switch eShop from November 29, carrying a $12.99 price tag.