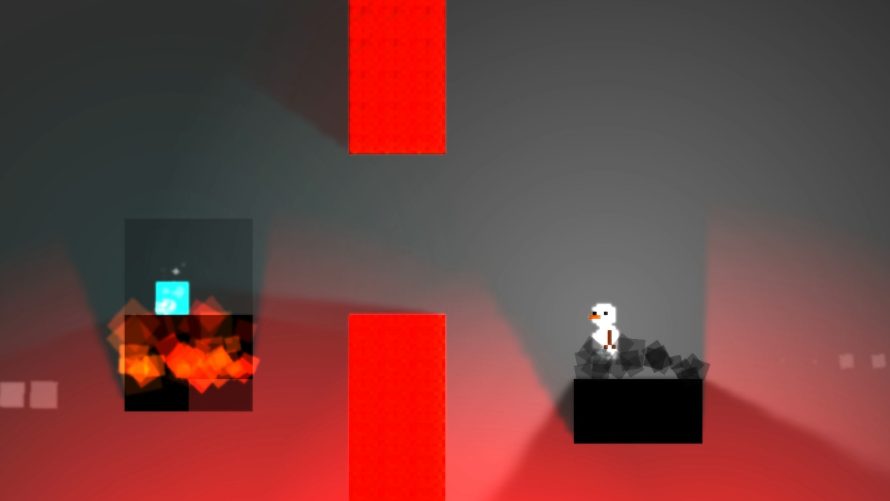 Hope you like platformers that require fast thinking and even faster reactions, because that’s ScanLines in a nutshell. Upon completion of one, the entire following level is drawn bit by bit -- scan line by scan line -- and you have precious little time to get to safety, before, well… fire bad. Quite a unique and clever concept.

Originally put together for last weekend’s Ludum Dare 31, its creator has already put up an ‘enhanced’ version, which is the one I played for this article. Makes sense to go for the best build available, after all. That said, enhanced/updated/improved upon or not, the game is incredibly challenging, with deaths both swift and numerous. While fun, the game does, unfortunately, rely a tad much on trial and error, and I’d say only the most skilled will be able to survive before they know what the next level is going to be (remember, the entire level isn’t loaded at once). So slightly flawed, but still fun.

Whether the snowman-ish protagonist was deliberate, seeing how we’re in the month of December and all, is unknown, but I like it. Kinda goes with the whole ‘level is burning up’ too, and to wrap up that bit of speculation, the goal is… wait for it… to grab what appears to be an ice-cube. Think I’m just gonna call him ‘Frosty’ from now on.

So, Frosty… man does he ever have it rough! Not only is his entire world a single screen, to go with the Ludum Dare 31 theme, it’s also falling apart before his very eyes. Unlimited lives and instant retries are part of his arsenal though, as well as a lovely on-screen death counter, so there’s that. Oh and seeing how the action’s constant, failure will set you back mere seconds for the most part. Yup, seconds. These levels are quite short, as indicated by the rate at which each deteriorates, to then be redrawn differently.

A strange concept for sure, and one that I’d recommend experiencing first-hand. So head over here for download links, and/or check to its Ludum Dare page. Just make sure you do take it for a spin, because if nothing else, ScanLines is certainly a breath of fresh air amongst platformers. Oh, did I mention it’s 100% free?