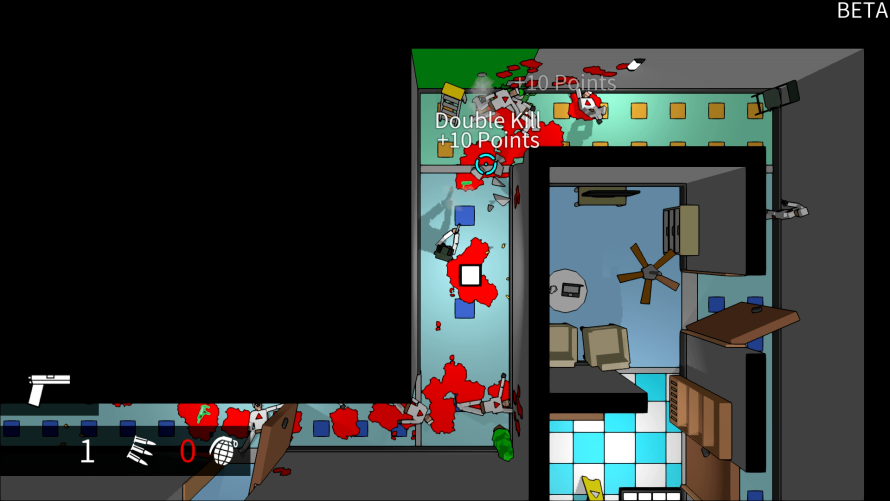 You know that feeling when you just wake up and some omnipotent being tells you to do stuff? Yeah, probably not, because that’d mean you’re nuts! Although in this case, it could also mean you’re simply playing Redie, as that’s how things kick off. No story or introduction. Just a mission with but a single objective: kill everyone… before they kill you. Oh, and that omnipotent being I mentioned, seems to take a hike after the tutorial. No idea where to, and I don’t care. There’s killing to do!

Unfortunately, things didn’t quite go according to plan, as I ended up dead more times than I cared to count. Things were simple enough early on. Just me and a bunch of rooms, each with a person conveniently facing away from me, ripe for gunning down; or stabbing, if I was in a stealthy mood. Not that it seemed to matter much in the beta, mind you, as the lot didn’t care enough to react after watching one of their colleagues get gunned down. Or maybe that’s intentional -- maybe they simply… didn’t care? Ugh. Cold.

Whatever the case, there’s no beating around the bush: Redie is heavily inspired by Hotline Miami, although with a much cleaner look and fewer strings attached (no masks, phone calls or other plot elements). Whether that makes it a bad game is hard to say because even if the gameplay isn’t super original, it’s still fun. And at the end of the day, so long as we’re not talking about a 1:1 copy here, isn’t that what matters most? Also, in case you’re wondering, yes, the challenge is as high as that of the source material. Definitely.

One thing that does make it stand out on its own is the ‘mastery’ system, which is something that presents you with certain objectives in each level -- on top of simply surviving. How does the added challenge of a time limit AND a ‘don’t stop moving’ rule sound? Tough? You have no idea, although it certainly adds some replay value once all’s gun ‘n done. Provided you’re actually able to make it through in one piece that is, because like in Hotline Miami, Redie only gives you one shot at each level, forcing a restart upon death. Doesn’t matter how many or who you killed. Once you die, that’s it -- restart!