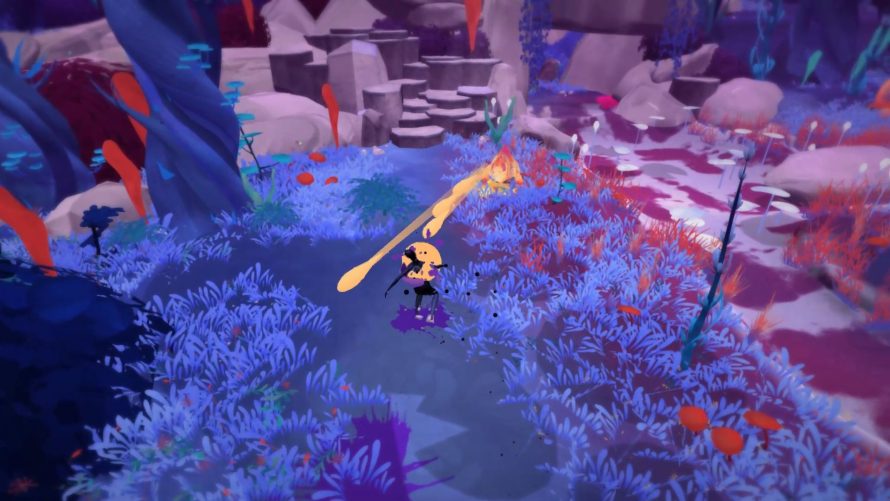 So, you know how some games take away control from the player to showcase some grand intro or backstory before finally letting you play? Yeah, Quur is the exact opposite, in that you immediately get to control a rather odd being, able to manipulate its surroundings by way of the Color. Because in this world, ‘color’ is not just a visual aesthetic… it is everything.

Okay so maybe that’s a bit of an exaggeration, but it is in and part of everything. Just look at the above screenshot, and you’ll clearly see it. At least I’m hoping that’ll be the case. Anyway, if you’re anything like me, Quur won’t make a whole lot of sense at first. In fact, even after spending a good twenty or so minutes with the game, smashing rock and beast alike, while flinging color with my hands(?), I still didn’t know exactly what was going on.

Didn’t change as time went on either, although I still found the experience to be enjoyable, traversing one stylish area after another, leaping over hills and taking in the sights as I went along. Not knowing my destination and completely lacking any motivation/objective might make this a somewhat unappealing experience for some, though, as it means the journey itself is forced to carry everything. To keep the player engaged at all times, as it were.

By using Color, you can either fight your way through the world, and watch how you’re slowly destroying it, or try to understand how the creatures behave, and embrace Quur’s ecosystem.

That’s not to say you’re simply along for the ride in yet another ‘walking simulator’, because you do have several options for interacting with the world -- some of which you will need to stay alive! Quick attacks, heavy attacks, and a projectile-based move are all at your disposal, along with a rapid teleportation ability, for… those times. But remember that your greatest weapon is still that of the Color (as in, something, rather than, well, color).

Oh, and for some reason, every now and then, the protagonist would stop and stare at a mountain off in the distance, almost as if that was its destination? Very peculiar if you ask me. Is it, though, or had something else caught the eye of this ethereal being -- something I blinked and missed, perhaps? Only one way to find out: grab a copy of Quur, and go for a stroll through its lovely forest.