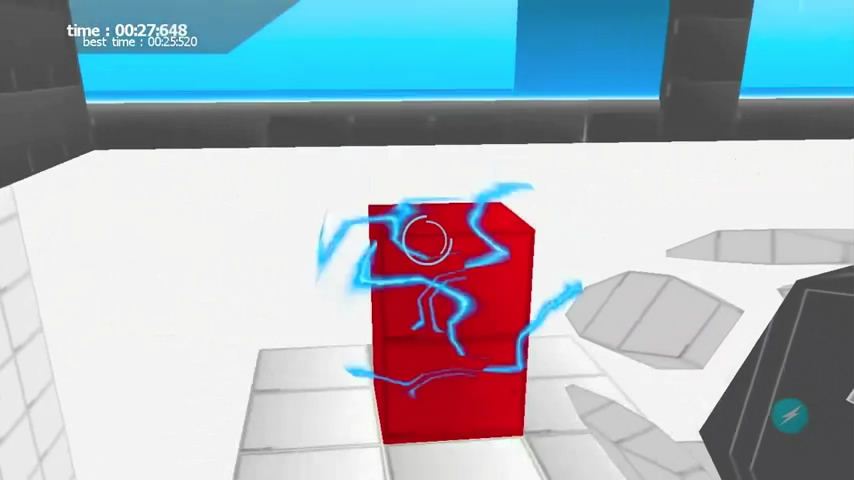 Your task in Pixel is simple enough: Get from ‘A’ to ‘B’ in each level, but the inclusion of a gun that lets you manipulate the environments, combined with the fact that you are often required to create your own paths, makes for quite the puzzling and challenging experience.

Make no mistake however: While Pixel does include a gun, this is not a violent game at all, since it’s a mere particle gun, and is only used to manipulate blocks in various ways. From extending one such to fill an otherwise impassable gap, to slowing down a row of constantly moving blocks, quick thinking is required to make it safely through the 25 levels. In case you enjoy the challenge that is  speed running, there’s plenty of fun to be had here as each level has a “best time” to beat, and dying doesn’t reset it, which might be just a bit unfair.. or, simply memorize the level layout and run like a certain body part is on fire? Problem solved.

But there is more than just a single solution to each path-creation puzzle, so speed runners are going to have their hands full with finding the quickest route (and actually pulling it off). On top of that, the color of each block defines its properties, ranging from the kind that move back and forth constantly, to those that act as jump pads; make sure you know where you’re going before you bounce off one of those things..

Fancy finding out just how good you are at thinking on your feet? Pixel is available on XBLIG for $1 (80MSP), with plans for both a PC and Android release later this year.
Official website and Twitter (@ratchetgames).