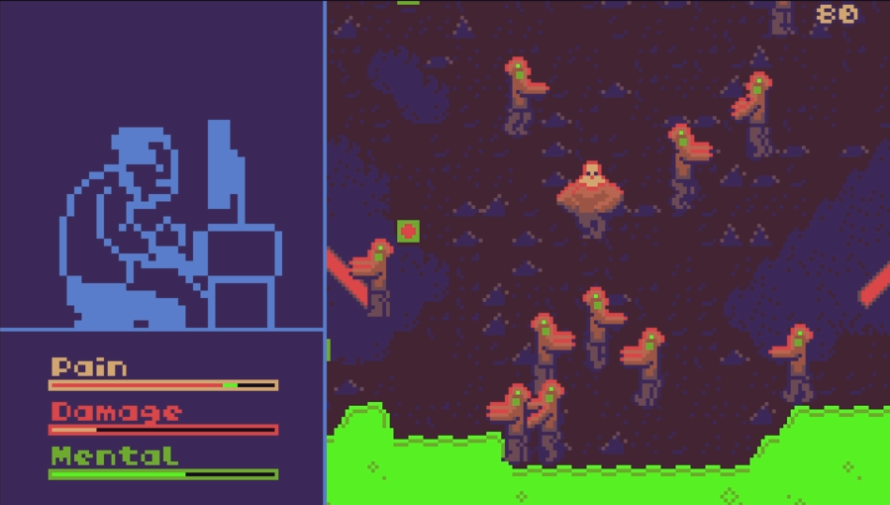 Button mashing is bad for several reason, the least of which is… it’ll wreak havoc on your poor finger(s). I’m sure there’s more too, but for now, let’s focus on Pain Masher instead – a game that’s all about being patient instead of mashing the ‘z’ key. Or go ahead and mash away, see how long you’ll last (spoiler: not long!). Oh, meds are also a solution. Kinda.

As I’m sure all that made very little sense, allow me to elaborate: Pain Masher, while certainly a button masher at first glance, is a game that’s trying its darndest to teach the player not to wear out their ‘z’ key by pressing it over and over in rapid succession. A rather strange affair, surely, but it did come to be during Open Jam 2018, which carried the theme “spam to win”, so there ya go.

Besides, as mentioned earlier, for the impatient lot, there are meds. Which will eventually rot your brain, because… winners don’t do drugs? Yeah. I don’t know. It’s almost as if the developer’s teasing players by randomly dropping those tiny mentality draining items amongst all the enemies, because take too many and it’s game over. Just like if you don’t refrain from mashing a certain button, at which point you’ll be hospitalized with a broken arm. Or some such. It’s weird.

But while the mechanics do force players to take it slower than I would have preferred, Pain Masher was still a very interesting experience. I suspect that goes double for those guilty of being… well, button mashers. You know who you are and for the love of your finger(s), please stop. There are no winners in the game of button mashing, only losers (and aching limbs).

Pain Masher is available for free from itch.io.