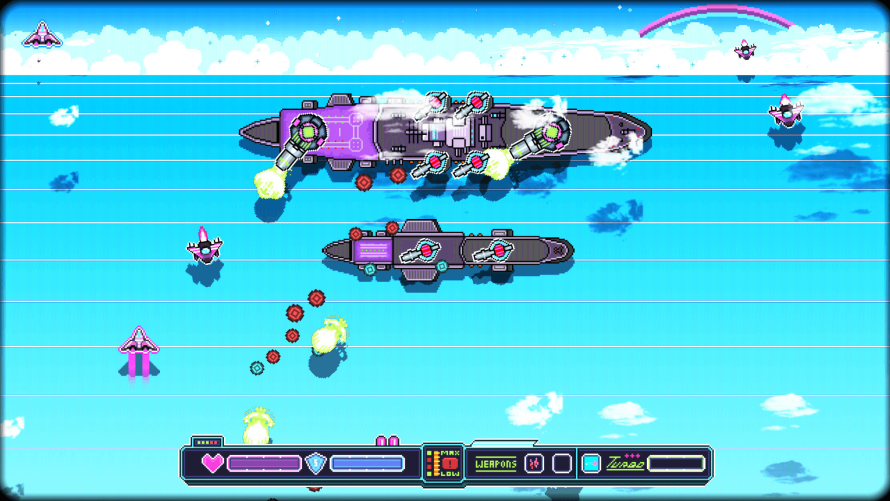 Remember a time when music was all synth-y and neon colors reigned supreme in entertainment? Actually, that may not be a super accurate representation of the 80s, but Nighthaw-X3000 is like that -- a shoot ’em up straight out of the distant past; a blast from the past, if you will. Oh, and like so many video games of yesteryear, this too features a “truly murderous difficulty”, because why not? Shoot, dodge, survive, or get blown up and start all over. Glorious!

Do keep in mind, however, that unlike enemies in other genre entries you may have played… this lot will take more than one hit. I know, shocking, but who’s to say -- maybe slowing the pace ever so slightly isn’t a terrible idea? Or maybe it is. I mean, the protagonist is after all up against impossible odds, taking on an alien invasion -- alone! Also, for those wondering: no, the ‘3000’ part of the title does not refer to the year in which Nighthaw-X3000 takes place. This one’s set in the year 2000. Y2K invasion. Yeah!

Your ticket for a journey to the past Nighthaw-X3000 is a unique journey to 80s, journey filled with countless references to classic action movies of those days. It’s a journey full of neon blasts and synthwave music.

Now, while the odds may be against ya -- as is the case for any good shoot ’em up -- you are able to tilt them ever so slightly, courtesy of some pretty awesome weaponry. Aliens may be alien, but they’re not immune to, well, whatever you end up pelting them with! And that’s a good thing, considering the bosses you’ll have to defeat to progress, eventually (potentially) saving mankind. Maybe.

So… ruthless aliens, bullets, space ships, more bullets, explosions, guns, chaotic boss battles. What, really, is not to like? Unless, of course, you’re not really a fan of the genre, in which case you’ve likely long since stopped reading anyway.

Nighthaw-X3000 will be out for Windows at some point during Q1 2017, Xbox One and PlayStation 4 ports very likely to happen… at some point.