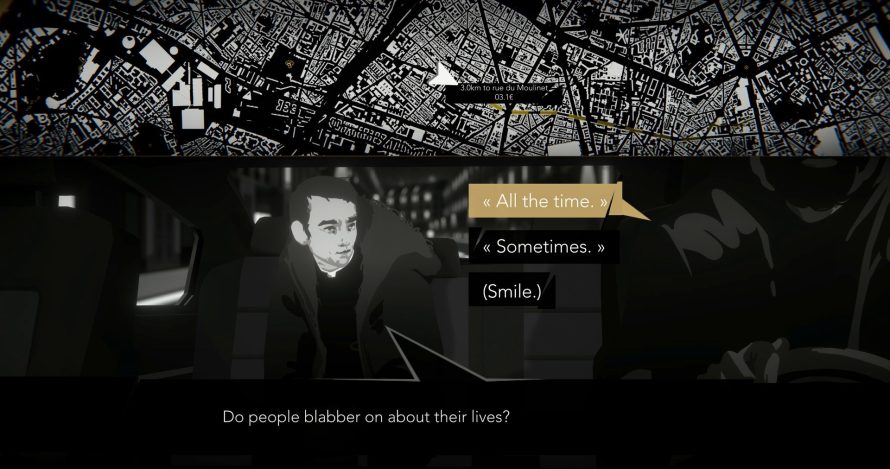 Welcome to modern-day Paris. I’ll just get right to the point: in Night Call, you’re a taxi driver and someone is out to kill you. Now ain’t that just a you-know-what? Oh, and it gets even worse: unless you manage to find out who it is in the next seven days, the cops are going to pin his/her recent murder spree… on you! Driving a cab in the City of Lights just got a lot more interesting (and dangerous).

That said, as you have likely realized from the screenshot above, Night Call is more 80 Days than Crazy Taxi – or put differently, more interactive fiction, less (if any) fast-paced driving. While I do prefer my cab rides in silence, in this game, progress will not be made unless people start talking while going from A to B. It is fortunate then, that the game’s protagonist has a gift of sorts – one that makes people around him/her get rather chatty. Ain’t just random small talk either. No, their thoughts, emotions, even secrets, are shared freely with you, a total stranger, and this is definitely going to come in handy. So be sure to pay attention whenever a passenger spills the beans.

Can you solve the mystery before it’s too late? Better hurry—both the clock and the meter are running…

Exactly why do they do this? Who knows? Or actually, who cares? It’s incredibly beneficial to you, seeing how ‘detective’ isn’t part of your skillset, so playing the part of “a friend, a confidant, a shrink” to catch a killer? Uh, totally worth any and all effort required. Do keep in mind that not every bit of information relayed to you late at night by random Parisians is of equal importance, however, as time is of the essence and only so many leads can be followed. Oh, and you have to balance a budget on top of all this. Lots of balls in the air. Better not drop any of them, or you might end up the killer’s next victim long before those seven days are up. Choose wisely or pay the price.