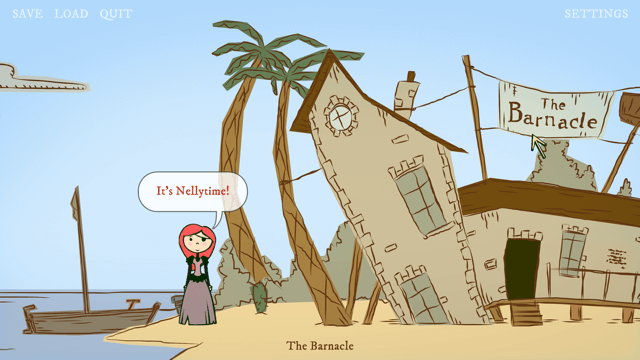 Nelly Cootalot has come a long way since her early days, that first adventure -- Spoonbeaks Ahoy! -- dating back to 2007. And not just as a character either, complete with a lovely second journey in The Fowl Fleet, but also visually, swashbuckling in hi-res widescreen and all. At least with the sequel. Less so for Spoonbeaks Ahoy!… although that’s about to change, remastered version recently announced and all. Arr? Arr indeed.

That said, as noted in the Kickstarter update, they “won’t be recording voice acting, or re-drawing the artwork extensively”, making it more of an enhanced version, really. Quite alright with me, though, as while the original is still very playable, cranking up the asset resolution and adding to it for proper widescreen… would without a doubt help it reach a wider audience. Oh, did I mention it’s working its way through Greenlight as I write this? So uh, give it a vote, yeah?

The original artwork was mostly vector graphics, drawn using a mouse (A MOUSE!). This means they can be scaled up with minimal loss of quality

On a related note, Nelly Cootalot: The Fowl Fleet is currently down 40% from its original price on Steam, meaning now would be a good time to pick that one up. Just saying. I know, I know, sequel, so you should (probably) play the first one… first… if you haven’t already. I mean, it’s 100% free, on top of being pretty darn awesome -- and it’ll be even better once remastered. But since that won’t happen until early 2017… arr!