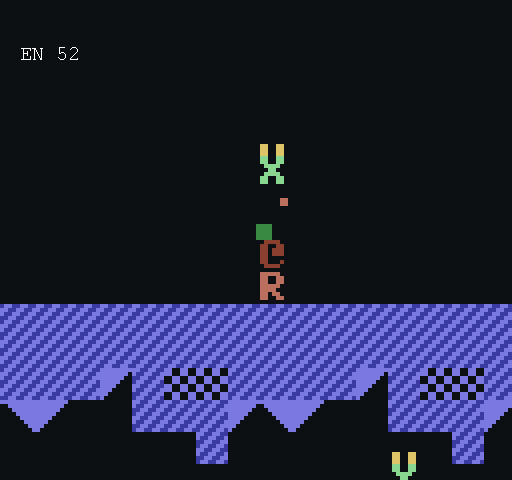 Hard to believe that this year, the first Metroid game will be celebrating its 30th birthday. That’s right, this timeless classic dates all the way back to 1986, and with Castlevania from that same year, the two gave birth to an actual genre: Metroidvania. But enough history lesson, as MTRD -- 2015’s unofficial ASCII recreation of Metroid -- awaits, with a unique, yet familiar, experience. And a groovy one at that.

With the eerie music on the title screen followed by the “game is about to begin” tune that plays as Samus fades into view, it’s hard not to immediately get overly nostalgic while playing MTRD. That is until you notice the vastly different art style: Samus’ body is a capital R, while her head is… well, @. Confusing? Well, I did mention in the initial paragraph how this was an ASCII version, so what’d you expect?

That said, it is pretty darn awesome, and features some quite clever ‘tricks’ for enemy design, everything in the right place and all. Zoomers are # while Skree are an odd mix of an X/Y morph. Oh and missiles! Missiles, as well as health pick-ups, also made the transition from 8-bit to ASCII, available at the press of a button (shift -- after collecting that initial pack, of course). Morph Ball? Yup, also in MTRD, and in its original location too. Lava (or magma, I suppose), annoyingly enough, also made the cut. Protip: avoid, unless you enjoy watching your energy reserves get zapped.

Seeing how MTRD did come to be during the Metroid Jam last year, it probably goes without saying that only a portion of the original has been recreated. Still better than nothing though, and even more so given its awesome soundtrack, which -- like the game -- can be acquired for free, from its home on Game Jolt. Groovy.