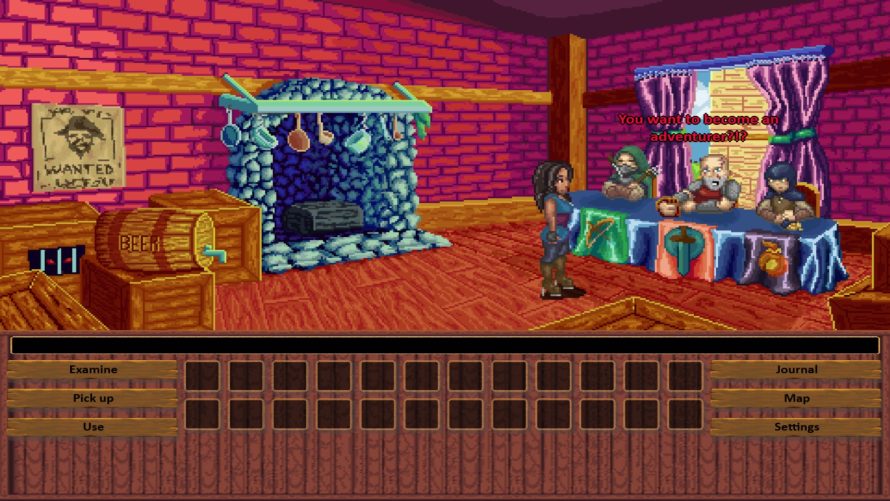 Monkeys & Dragons. Two things that really should be in point ‘n click adventures more often than they are, ya know? But seriously, what awaits here is… a tropical island full of monsters! Oh, and a honeymoon woefully interrupted by a kidnapping -- of the groom, for once.

Do keep in mind however the game is still very much in Early Access, June 2019 being its current ‘1.0 goes out the door!’ window. Ending voting? February of that same year. With all that in mind, there is quite a playable chunk in Monkeys & Dragons at the time of writing, three of five planned chapters readily available and all. Three chapters full of pointy and clicky mystery, intrigue, traps, a bride-turned-adventurer and… well, monsters. Maybe even a few monkeys. Because, you know, part of the title.

Explore a tropical island, gather and combine any sort of items, talk to the island’s residents and solve different kinds of puzzles to become a true adventurer!

That said, as you can probably tell from the above screenshot, the game doesn’t exactly attempt to be all secretive about its inspirations (The Secret of Monkey Island, among other). Not necessarily a bad thing though, as titles like that one very much dates back to the glory days for the genre, and hopefully this entry will be able to recapture some of that pixelated magic. Time will tell.

(Thanks to Indie Retro News for the heads up.)