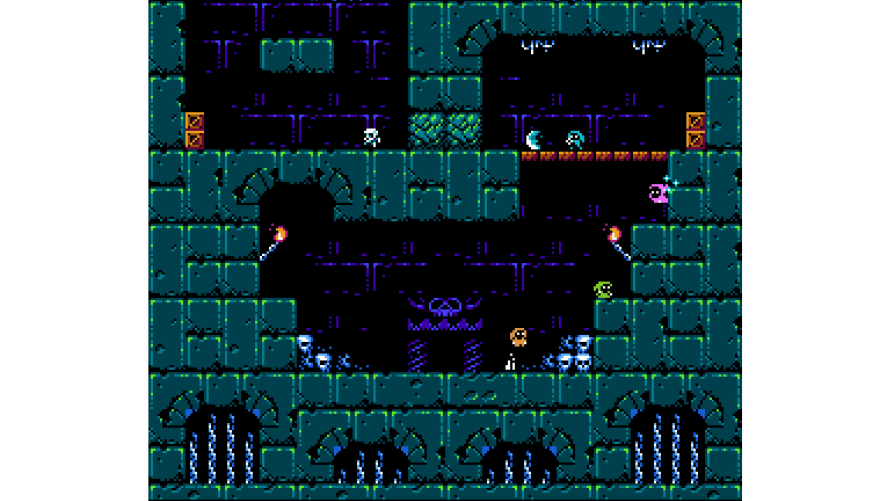 Squeezing your game onto a Nintendo Entertainment System (NES) cartridge without making huge sacrifices in one form or other is almost a work of art. Which is pretty much what the wizards over at Morphcat Games have managed, their groovy little 4-player co-op title Micro Mages only taking up a meager 40 Kilobytes! Wow. They haven’t cut any corners either, far as I can tell, so let’s chalk it up to black magic and find out what’s what, eh?

Alright, here’s the thing: up to four players may enter the Demon Fortress after donning a pair of fancy wizard robes, blasting and wall-jumping up, up, up and away! Teamwork? Oh, that’s just encouraged, not enforced; if you want to be that player, the one who prioritizes getting the highest score over helping his/her allies, then by all means -- go ahead. Do make sure someone remains alive during all your shenanigans, however, as otherwise there’ll be no coming back from the ghastly state you’ll inevitably be put in when karma comes around.

Will you help each other overcome the dangerous traps built to stop nosy adventurers or will you turn on your comrades to snatch the high score?

Alternatively, you could provide assistance to your comrades by freezing enemies, although I’d wager they’d rather have you contribute as a mage than a floating spirit. Could be wrong though. Some might prefer it like that. Whatever the case, twenty-six spooky levels awaits across two different difficulties/modes (normal and hard), filled with hazards, traps and… who knows what else? Ah, treasure, I’m sure. Lots of treasure, and secrets. So many secrets. In case all that for some reason doesn’t tickle your nostalgia bone, how about this: password saving! Just like in the good ol’ days. So, who’s up for some wizardry fun?