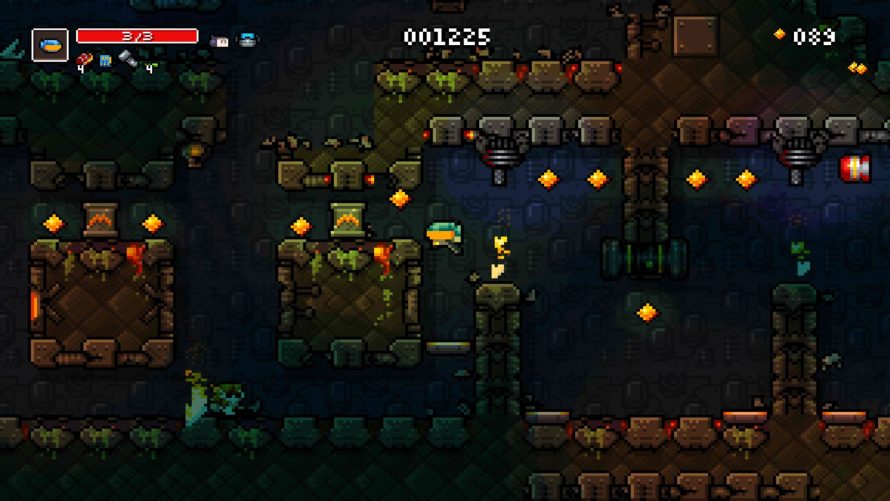 Hack the pixels, the world… heck, hack everything, in Meganoid(2017)! Or, alternatively, rush for the exit. The choice is yours. Just keep in mind that this place is anything but hospitable and everything is out to kill you, so don’t stand around for too long, admiring them lovely pixels. I mean, there are all kinds of goodies to grab, most of which will definitely help even the odds -- like, say, a jetpack, for added mobility, or a rocket launcher to make things go kaboom! KABOOM! Kaboom?

But let’s go back to 2013 for a second, during which Gunslugs brought chaotic pixel blasting to iOS and Android. Such an amazing game from one-man studio Orangepixel, and since, he’s followed it up with some rather lovely titles; Space Grunts, for example. Although… what if we go even further back, all the way to 2011? That is where the Meganoid franchise originated, after all -- a franchise which shall soon see a reboot of sorts (I think?), with the upcoming release of Meganoid(2017). Very groovy.

In true Meganoid tradition, you’ll die a lot in many different ways, but you’ll learn to overcome the difficulties, learn how the Meganoid world operates, and eventually get to the bottom of it!

Now, unlike the original, which was quite the challenging pixelated run ‘n gun platformer… oh wait, that actually kinda describes Meganoid(2017) too. Well, nothing wrong with that, and hey, did I mention you get to experience a “hackable game world”? You will have to track down key-cards before being able to bend the rules to your liking, though, but being able to mess with how certain aspects work (something something environmental hazards) makes for a worthwhile search.

On top of that, with levels generated randomly for each session and drones always on the hunt, the advantage said ‘modifications’ grant is certainly a welcome one, to say the least. Explosive weaponry and night vision goggles (wait, what?) will only get you so far, and there’s no guarantee of you always being fortunate enough to stumble upon something remotely useful during a run.

Better to expect insurmountable odds and prepare for your inevitable death, as that way, you’re more likely to be pleasantly surprised while delving the pixelated depths of Meganoid(2017). Also, good luck with its boss battles. You’re gonna need it.

Meganoid(2017) will be available March 30 from itch.io, Google Play, and Steam, with varying price tags.

Update: …and iOS, although iTunes being what it is, can’t link to that pre-launch. So here’s a link to Orangepixel’s page there instead.