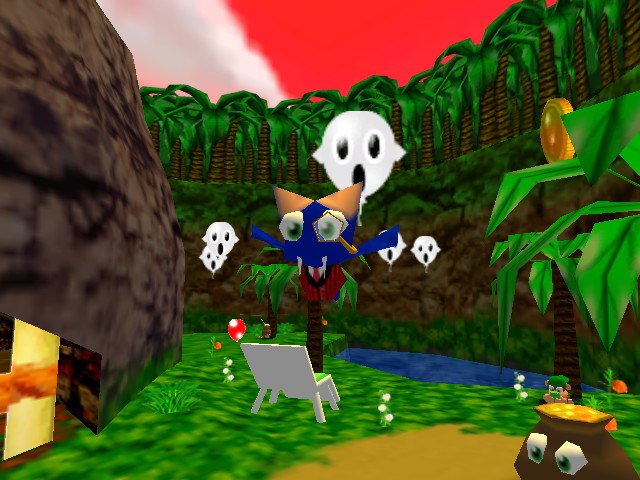 Remember how much fun the likes of Donkey Kong 64, Kirby 64 and all them other ‘something 64’ titles were on the groovy Nintendo 64 all those years ago? What, you never played those? Oh my. Well, all the better reason to give Macbat 64 a glance, I’d say, as this looks like an attempt at reviving the glory days of low-poly 3D platforming; a time before everything was all about 4K, 120 FPS and curved monitors. A time when… games were simple, accessible and above all else, FUN!

Now, based on what Marcus Horn (aka. SIACTRO) has created here, I’m obviously not alone in longing for a time when games prioritized entertaining gameplay over mind-blowing visuals. Some might be put off by the 4:3 aspect ratio, however, and the… somewhat simplistic overall experience. But if you’re still reading this article, chances are you’re not among them, which is very groovy. That said, as you may or may not recall, memory being such a fickle thing, old(er) platformers did also have one gruesome component that few enjoyed and the majority utterly despised: water levels! Unfortunately… Macbat 64 is no exception, even if the developer does promise that it “is not that difficult”. Sure, sure.

A cheerful cast of quirky little character awaits you on your journey as the very posh little chap you are!

Seriously, though, when you’re not flapping those tiny blue wings of the bat protagonist, exploring the world to collect stuff for those in need of… something, it’s time to hit the kart racing track! Or perhaps some good ol’ first-person shooting instead? Just don’t forget to take a rest every now and then, hitting up the local watering hole as few things are more relaxing than chatting up the locals, after all that flying and/or racing.

Oh, almost forgot to mention that Macbat 64 is actually the successor of a freeware title by the name of Kiwi 64, and… there’s even a demo -- albeit from an early build -- of Macbat 64 on Game Jolt.

Macbat 64 is available from Steam and itch.io, carrying a $4.99 price tag.