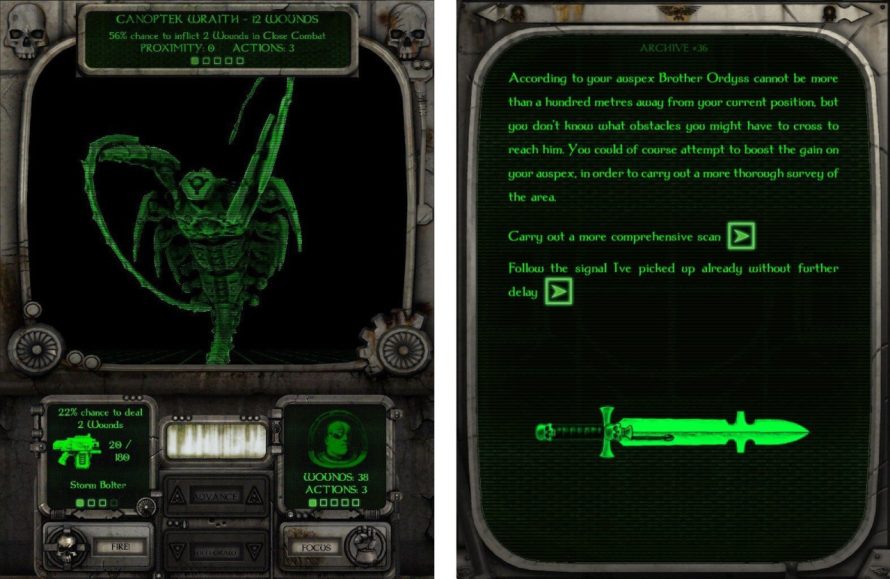 Space Marines. For a bunch of bulky, heavily armored fellas, packing the most advanced weaponry available in the distant future, they sure do find themselves against the odds rather frequently. Legacy of Dorn: Herald of Oblivion is no exception, although it does feature a scenario among the grimmest yet: your entire squad has been annihilated and you’re trapped aboard a space hulk infested with all kinds of nasties. Fight through the pain and escape, or… die trying.

Originally written by Jonathan Green and published by Black Library/Games Workshop back in 2012, this digital adaptation is a bit of an expanded version, as it were. See, Tin Man Games has taken the process a step further, instead of simply turning book into game, with the addition of a “holographic combat simulator”. Or in plain English: the classic dice roll mechanic of yesteryear has been scrapped in favor of a turn-based on-grid system. This should, in theory, allow for a more tactical approach during combat. And seeing how warfare is such a huge part of the Warhammer 40,000 experience, chances are this is going to be seen as a welcome change from the norm.

That said, there’s obviously more to it than blasting Necrons, Orks and other creatures of darkness, as you’ll also have to partake in the ‘choice game’, this being a gamebook and all. One wrong decision can prove devastating, while the exact opposite is also the case, so take your time and think it through before tapping the screen to progress the story. Speaking of which: Herald of Oblivion is only the beginning as Legacy of Dorn is planned as a trilogy, parts two and three scheduled for release in early 2016.

War may be hell, but for a Space Marine, it’s a way of life. As such, you’d do well to make your Chapter -- not to mention the Emperor -- proud. “How”, you ask? Why, by blasting the crap out of everything that moves aboard the space hulk, of course. Lock and load, soldier!