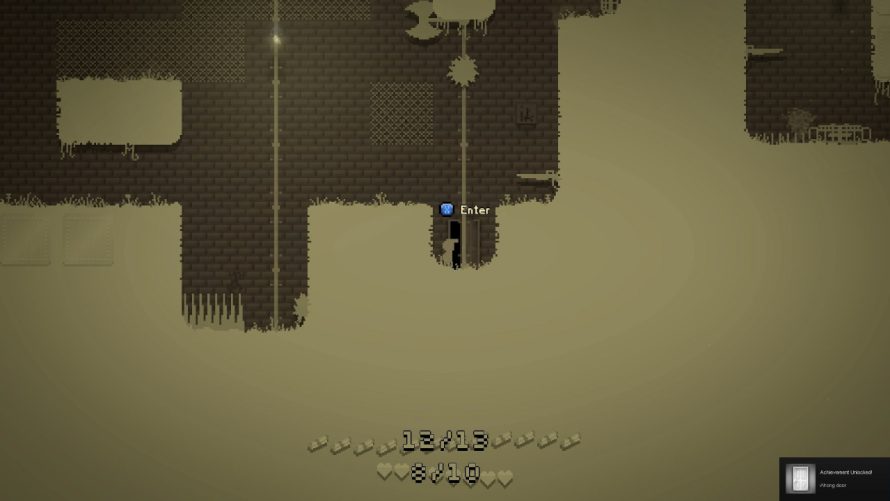 “Just Get Through”, the game told me. Yeah. Okay. A (wall) jump here, some TNT there, and then it’s on to the next level. Right? Nope. Floor spikes, gun turrets, sawblades -- some of which even move -- and other environmental hazards turn a simple task into a genuine challenge. A stylish, fast-paced and fun challenge… but a challenge nonetheless.

As is the case with most platformers of this kind, however, the first good bit is relatively easy -- likely to ensure players don’t get discouraged early on. That will likely happen during the later levels, however, unless you’re extremely talented at the art of platforming and willing to deal with a few glaring issues. But let’s put those aside for later because while the game is by no means perfect, there is still a lot to like about it.

For starters, as I mentioned earlier, it looks really good, featuring a sharp contrast of gray-ish and black-ish (yes, really) colors. That is until you unlock additional palettes, at which point the visual design will change either after every level or span an entire run, depending on the choice of configuration. An undeniably nice little addition, and surprisingly, not the only type of unlockable either, as most additional modes are also initially inaccessible.

These become available upon fulfilling certain criteria, like reaching level 30 in ‘classic run’ (‘hardcore run’ unlock) or hanging onto 200 coins during a single ‘coin run’ (‘survival run’ unlock), and the game doesn’t exactly hide how to unlock any of them. Some can be pretty tricky to get, but… at least you won’t have to hit Google to find out what triggers each, ya know?

Anyway, back to the game, what with all its TNT-throwing, wall-climbing, spike dodging craziness. The goal in each level, at least in the modes I played, is to -- surprise -- reach the exit in one piece. Oh and both life count and TNT supply is finite, although both can be replenished by finding specific items throughout the level. That and after every three [levels], you’re able to choose one of three random upgrades, including an increased max life count, additional jump height, speedier movement, and other fun things.

Some are (unfortunately?) better than the rest, but rarely to the point where personal preference needs to go out the window -- pick whatever suits your play style, I’d say. Enjoy explosions? Grab some extra throw distance then, or, alternatively, immunity to explosions for added safety. Or maybe you don’t much fancy getting killed almost immediately upon respawning? Hit up that increased spawn protection then, and live longer. In theory.

Speaking of, this is where things start to get rather… dicey. See, a challenging platformer is one thing, and if at least reasonably fair, it can be a blast to play. Unfortunately, Just Get Through has moments, however infrequent, that’ll likely trigger a “WHAT?!” reaction from most. A well-known video game term known as a ‘cheap death’, caused by one or more events leading to the untimely demise of a player, with little to no room for avoidance.

Normally, in games that let you wall-jump, you’re able to scale vertical obstacles simply by leaping higher and higher on the same surface. Not so here, as you’re only able to bounce onto the same wall once, after which contact with another surface is required to proceed. Otherwise… you’ll start sliding down and fast at that (unless you grabbed the ‘slow descent’ upgrade). Given the number of things one has to dodge in later levels, this adds unnecessary frustration to the overall experience, turning an otherwise fast and fluid speedrun-ish game into a case of trial and error. Not cool.

Oh, did I mention levels are randomly generated, and that there’s even a one-attempt-and-that-is-it ‘daily run’ mode, which features the same seed for everyone, on a 24-hour rotation? Now that, on the other hand, is cool. Very cool. Provided RNG is on your side anyway, as randomly generated content is just that, so while one run may be a bit of a breeze, the next could be the exact opposite. No way to know until the nameless, faceless protagonist embarks on yet another hazardous journey.

All in all, if you don’t mind some semi-wonky wall-jumping, the fact that RNG can -- and probably will -- mess with ya when generating each new level… Just Get Through is plenty fun. Even more so, if you’re the type who fancies himself/herself a bit of a platformer enthusiast, as then, the game’s wealth of modes (with leaderboard support!), coupled with its stylish design, is almost guaranteed to bring plenty longevity. Oh, and if you’re feeling creative, the game ships with a fully-featured level editor, further extending its lifespan. Groovy.

Just Get Through is available from Steam (Windows), where it carries a $4.99 price tag.