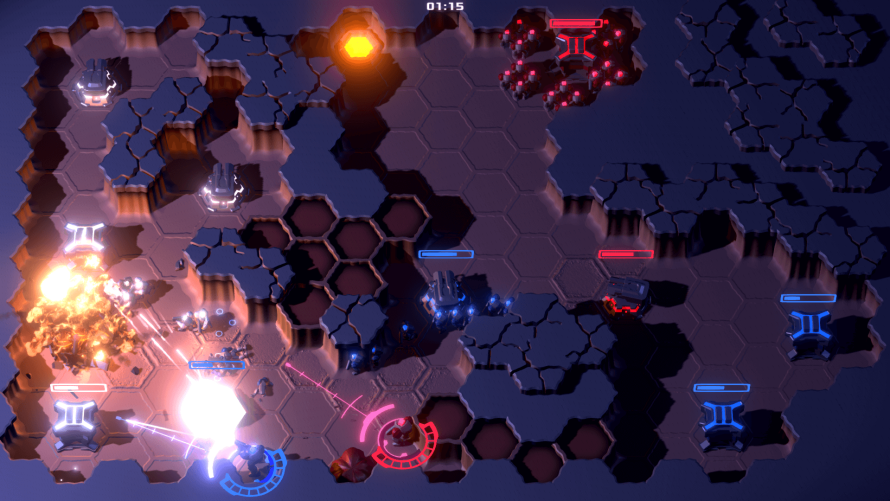 Long-time readers might remember how, back in 2015, I reviewed the first part of SkyGoblin’s The Journey Down trilogy. An awesome point ‘n click adventure that concluded in 2017 with quite the finale. As such, surely their next title would also be in the realm of pointy and clicky stuff, right? Not even remotely, as HELLFRONT: HONEYMOON has no story whatsoever, and looks to be quite the adrenaline-fueled action experience. Weird!

So far, the only potential downside for this chaotic multiplayer experience, the way I see it, is that it’s ‘local only’. But we do need more couch craziness and friendship-breaking multiplayer titles. So it’s fine. Besides, for those times when you can’t get (up to) three other people to join ya, there’s always the solo missions. I suspect those won’t be anywhere near as much fun as an all-out 1v1v1v1 skirmish though. I mean, just look at that carnage in the trailer. Look at it!

Before I forget: remember to build up your defenses during all the war waging, as an all-out assault with no base to fall back on will leave your forces in shambles, at which point… well, you’ll likely be glad that skirmishes in HELLFRONT: HONEYMOON rarely last long anyway. Fast, furious and fun -- that seems to be how SkyGoblin envisioned the experience here, and given the twin-stick shooter gameplay, that’s definitely a good call. Plus, it’s easier to find five minutes here and there to blow up your friends/enemies than several hours, so there’s that too. Now… who’s ready to rumble, the moment the game hits digital storeshelves?

HELLFRONT: HONEYMOON should be out later this year on Steam, Switch, PlayStation 4 and Xbox One.

HELLFRONT: HONEYMOON – Announcement Trailer
Watch this video on YouTube.
Facebook Twitter LinkedIn Pinterest Tumblr WhatsApp Telegram E-mail
Previous article 'Donut County' Wants You to Become the Very Best... Hole In the Ground?
Next article MAGS September Is All About Temptation In the Form of "Mermaids and Sirens"