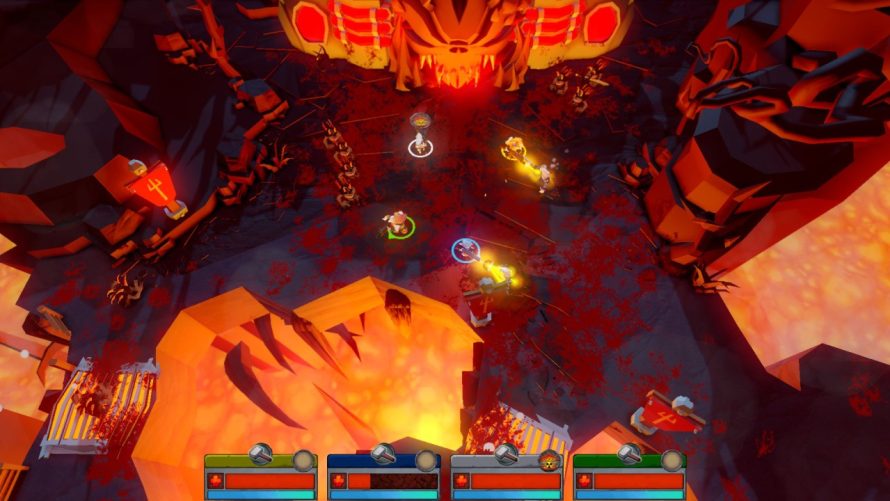 You’d think the Lord of Death could hold his liquor, but alas, that is not the case. As a result, hell has broken loose -- quite literally -- in Gunnheim. And… well, that’s pretty much it for backstory! Do you really need a deep plot, when the game is all about blasting the crap out of everything, as a bulky, utterly insane, gun-toting Viking? Didn’t think so! Also, it’s dangerous to go alone, so do bring a few friends along!

Last time I checked, Vikings were known for two things: getting hammered and fighting, which means the game doesn’t stray far from the source material. If we completely ignore the fact that no Viking ever wielded the modern weaponry on display here, that is. So let’s do just that, because there are demons to kill, and plenty of them in this co-op enabled twin-stick carnage-crazed chaos. Blood will be spilled as your enemies drop like flies. Some, anyway. Word is, a select few will have you going through plenty ammunition before they fall. But fall they will. It’s just a matter of time.

The Lord of Death hits the bottle hard on the Ragnarok of all benders and hell breaks loose- literally. Enter the unholy children of Gunnheim: gun-toting, skull-crushing Viking warriors born and bred for battle, summoned to restore the balance.

Right. Anyway, did I mention how Gunnheim is a rather gory experience, and that you should totally bring (up to) three friends along? Why? For maximum carnage of course! That said, its randomly generated levels, varied weaponry, and stylish visuals should translate to proper entertainment for the lonesome Viking too. I mean, when did ya last get to blow up hellspawn with an atomic bomb as a Viking? Let’s hear it for Norse mythology… in modern times!