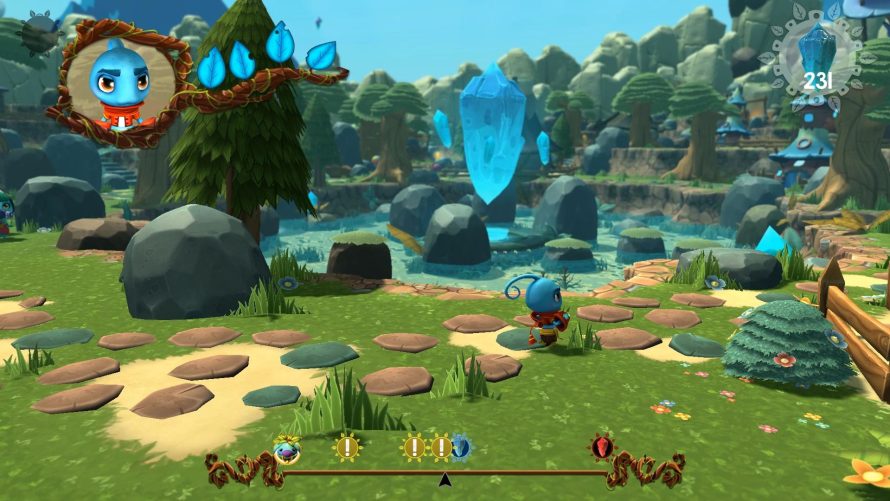 Don’t ya just hate it when stuff breaks? And even more so when, as is the case in Ginger: Beyond the Crystal, when an entire world is on the verge of collapse. It’s a good thing then that its protagonist, Ginger, is on the case, as this blue fella has the power to restore what once was. Or he will at some point throughout this colorful platforming adventure. Unlimited power!

Alright so that last bit was a bit of an exaggeration, obviously, but you will be playing as Ginger and there will be some restoration work in the near future. Entire villages brought back, potentially healing the entire world in the process. Provided you manage to not mess up at some point along the way that is. Picking and placing the right houses is not just something anyone can do after all. And then there’s the platforming… the glorious platforming.

In between platforming sessions, you’re tasked with rebuilding homes, recreating the towns of your ancestors before disaster hits. Place different types of houses in the villages to restore happiness and in the process, heal the world itself!

With Halloween rapidly approaching and all, it’s undeniably fitting that Ginger: Beyond the Crystal has at least a few ghastly locales, including… crypts! Oh, and maybe a graveyard or two. Wouldn’t surprise me to find him / her / it having to bounce through such a place. Not one bit. Just don’t lose track of your main objective as you wander off in search of unexplored areas because there are still both trapped villagers to rescue and crystal fragments to gather. That and, you know, a world to restore.