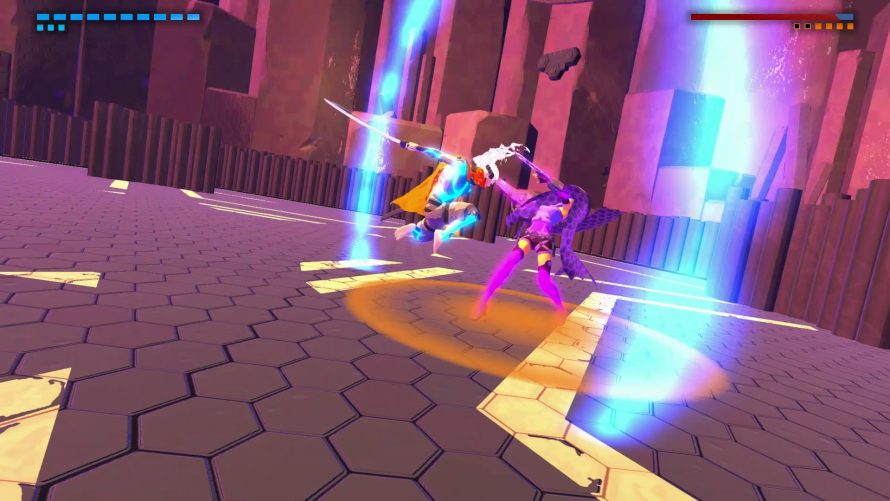 In Furi, the jailer is all that stands between you and freedom; simple as that. Except it really isn’t. Not in the slightest. Because a lot also stands between you and the jailer. A lot of… beings. With swords, bullets, and other crazy moves to assist with their intent to put you six feet under for good. Your skills will be tested here, and now you can finally take the game on the go; even if it isn’t identical to the other versions.

Now, while Furi has long since been released on both PC, Xbox One and PlayStation 4, tech tweaks aside, those all pretty much provide the same overall experience. Same fights, same animations, same modes, and so on. Not quite so with the recent Switch port.

For starters, bosses on Furi difficulty have 20% less health, meaning… well, as the developer puts it “for the speedrunners competing on the global ladder, this means the Switch version is a different category”. No way around that. But while less tanky enemies should, in theory, make encounters overall shorter, players will still have to master the various mechanics to survive. Which, from personal experience, is not easy. At all. So satisfying when you finally pull off that victory though!

Oh, and how about some modified shoot patterns? While these aren’t used much, it will force those overly familiar with, say, the PlayStation 4 or Xbox One version to rethink their strategies. Slightly. Fewer bullets with a size increase, reduced on-screen time, or maybe even… brand new patterns. Yup. Also, the One More Fight DLC? Unlocked upon beating the game on Furi difficulty. Simple enough. Last but by no means least, global leaderboards -- not available in the Switch port. Instead, players get to speedrun the game on Furier difficulty. Good luck with that, and do tell the jailer I said ‘hi’.

Furi is available on Switch, PlayStation 4, Xbox One and Steam, carrying a $19.99 price tag.