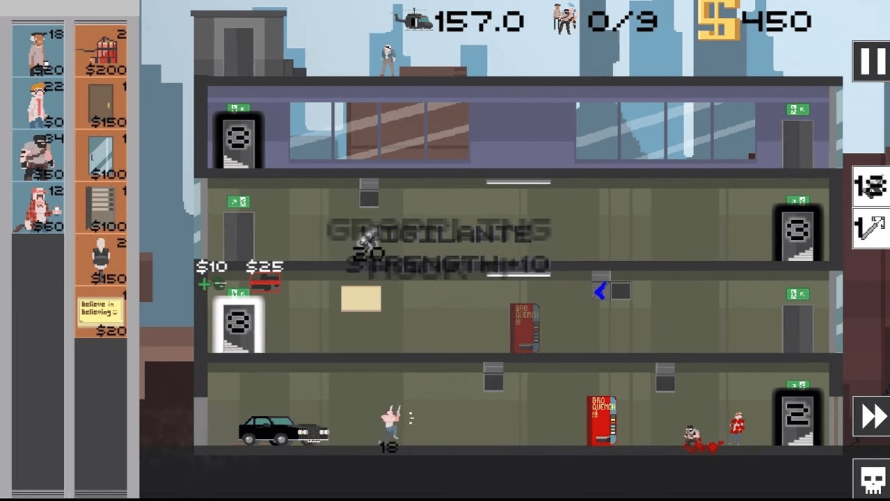 Are you, like me, fed up with pesky glory-hound action heroes always putting an end to your criminal activities (which may or may not include world conquest)? Then this is the game for you, as Forgive Me My Henchmen lets you enact that particular revenge fantasy; you know, the one in which you finally take down said action hero. How? Two words: tower defense!

If you play your cards (read: henchmen, fortifications… traps?) right, that poor sucker won’t know what hit him. Heck, even if he does make it through the entire building… you did remember to prep the chopper for a last-minute escape, right? If not, well, then we both know what’s going to happen, and it involves bars. Steel bars. For years upon years.

Although in all seriousness, I suspect the escape sequence is tied directly to how far the antagonist -- in this case, the good guy -- before the counter next to that fancy helicopter icon atop the screen runs out. Wouldn’t make much if you could simply run away whenever, after all. I mean, sure, that is how some action movies play out, the villain somehow making a seemingly impossible escape at the very last split-second. But not here.

Or maybe I’m wrong. Hard to say, as the trailer below is where most of my information comes from at the time of writing. That said, such a lovely explosion though, even if Mr. Big-Shot Action Hero somehow manages to survive it with an absolutely ridiculou-- oh right, forgot how the bad guy isn’t the only one capable of impossible stunts in these things. Well, you know what they say: Forgive Me My Henchmen!

Forgive Me My Henchmen should be hitting Kickstarter in April, with a release at some point in July on as yet unannounced platforms.

Forgive Me My Henchmen - Official Trailer
Watch this video on YouTube.
Facebook Twitter LinkedIn Pinterest Tumblr WhatsApp Telegram E-mail
Previous article 'The Majesty of Colors Remastered' to Resurrect a Rather Tentacular Experience... Soon!
Next article Time to "Mix and Match", Get Creative With Adventure Game Studio For MAGS February!