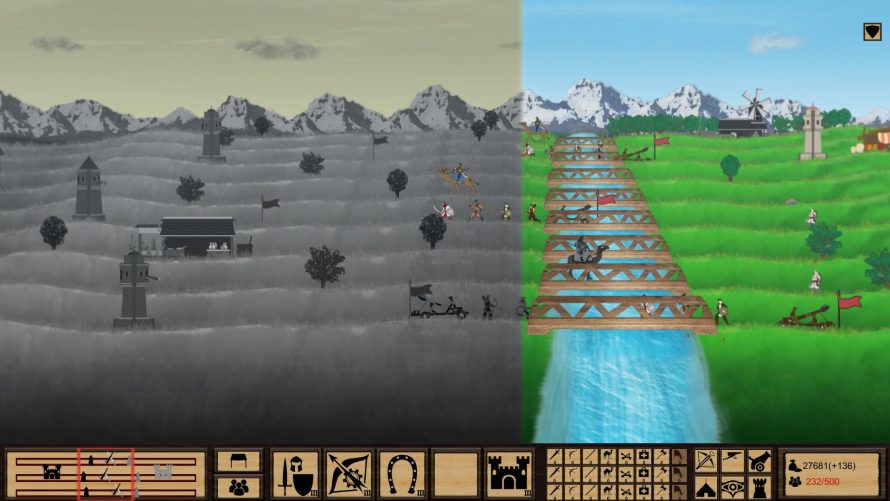 Strategy without direct control over units may sound a tad ridiculous to some, but that’s how Flawed Ones: Puppeteer is designed. Construct buildings, draft soldiers to form mighty armies and use battle skills to even the odds, as you march across a rather clever tri-lane setup, towards glorious victory or devastating defeat. Groovy.

Oh, did I mention you actually get to play the bad guy for once? Far as I can tell, anyway, as you’ll be assuming the role of a manipulative mastermind -- a… Puppeteer. Not just any string-puller either, as this guy is able to control people through his shadow stage. Time to wreak havoc with catapults, archers, mighty towers, deadly militia, upgrading them as you go along, to create even more chaos! Destruction! Mayhem! Ah, so much potential fun to be had.

There are many cinematic scenes in the game. We think our art is really unique and suits well with the concept and scenario. With enough funding, there will be more endings as well!

But alas, that’s not going to fruition without a successful crowdfunding campaign, for which the goal is $6,000 (noticeably less than most, I might add). They’ve spent about a year on the project so far, and now it’s time for that final stretch, it seems. Maybe? Anyway, the main reason for hitching a ride on the Indiegogo train is to be able to afford a Unity Pro license, along with a fair amount of assets, both of which will help speed up the process.

So be sure to offer support either by spreading the word, or -- if possible -- by way of financial aid for their crowdfunding attempt. Fingers crossed for a successful campaign (both Indiegogo and Greenlight), and eventually, a great game.