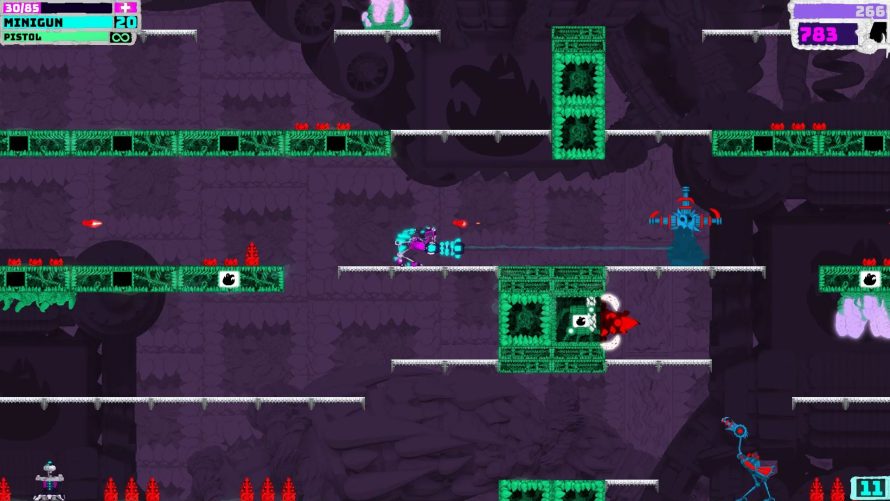 I hate Featherpunk Prime‘s Cybirdroid corporation. I really, really do. Not just because they’ve captured my fellow flamingos, but… they’re evil, alright? Can’t really describe it in greater detail, as there’s not enough time to kick their ass and rant about how much I utterly despise them. And seeing how the odds are seriously against me in this neon-bathed twin-stick platformer, well, I’m gonna focus on the latter; guns at the ready, may my cyborg flamingo body carry me to victory!

Except it didn’t, because the game is bloody brutal and I’m just not good enough at it. Which is also why this is tagged ‘impressions’ rather than ‘review’, but that’s just how I do things. Oh, might as well get the absolutely biggest annoyance out of the way first: Featherpunk Prime only gives you a checkpoint every six levels, and yet, you have to tackle a pretty darn tricky boss every three. Logic? Yeah. Don’t see it.

Yet, in spite of dying repeatedly, I still pressed onwards, getting as far (ha! far…) as the eleventh floor of the tower where the aforementioned flamingos were, allegedly, held captive. Why? Because the gameplay was that much fun and even the music -- which I didn’t care much for at first -- grew on me. After getting used to the controls, I was dashing left, dashing right, double jumping, aiming all around me, using whatever I could for cover since bullets/rockets/explosives for some reason don’t pierce platforms, ever. It was crazy, chaotic and fun. For the most part. 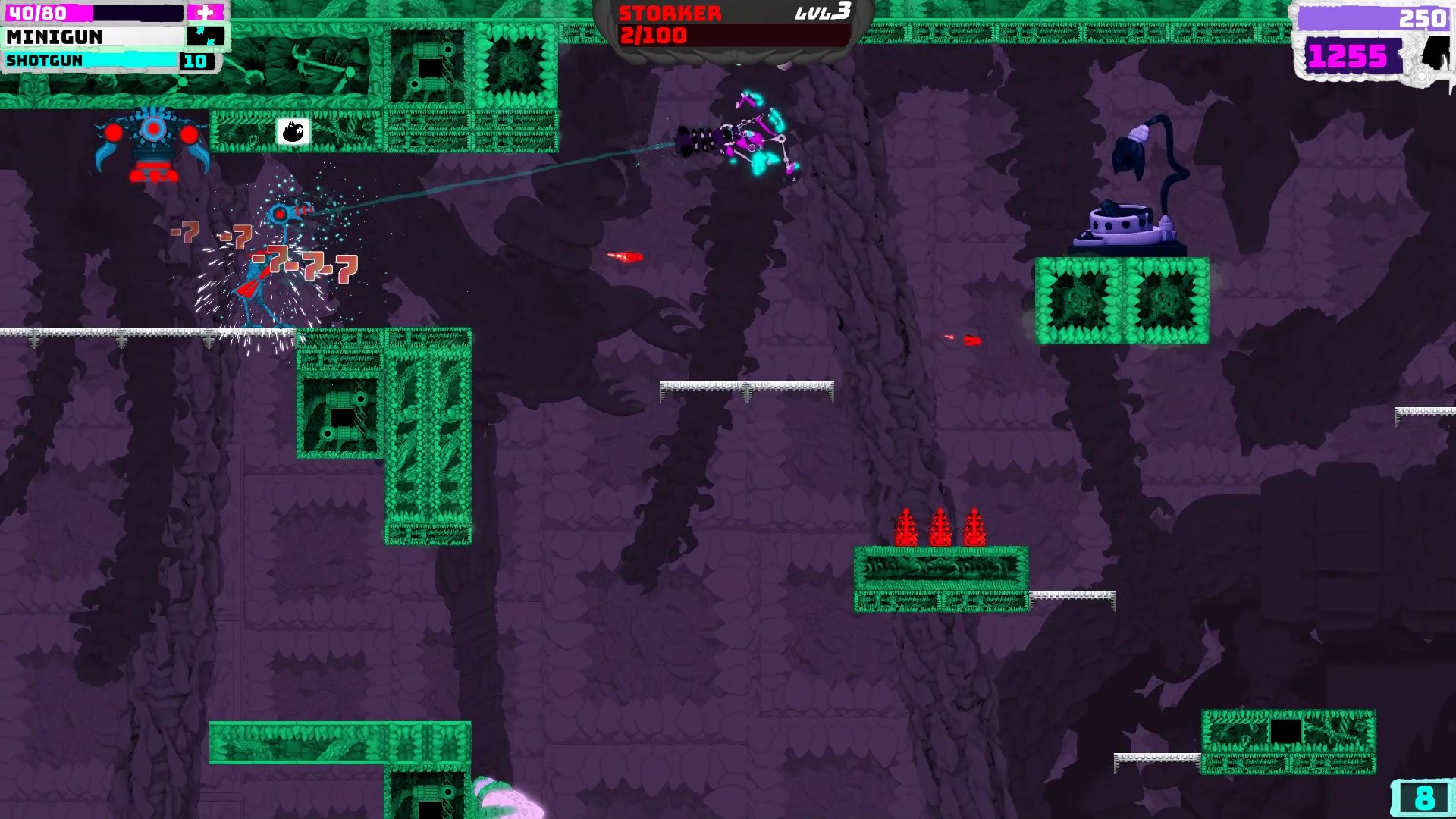 While the freedom of movement one has access to as this particular cyborg flamingo certainly comes in handy, dodging bullets from multiple assailants at once is still anything but easy. Health refills? Few and far between, sadly. Not that you’re completely defenseless, obviously, as the weaponry at your disposal is anything but useless -- even more so if you’re lucky enough to get either the bouncergun or the minigun.

The former lets you, more or less, bank your shots, standing far away -- and often in complete safety -- while pelting away relentlessly, reloading every so often, while the minigun… oh my. Absolute destruction is what that one is about. It does require line of sight, though, which is often less than ideal since, you know, if you can hit them, they can hit you. Range is not a factor in this game. 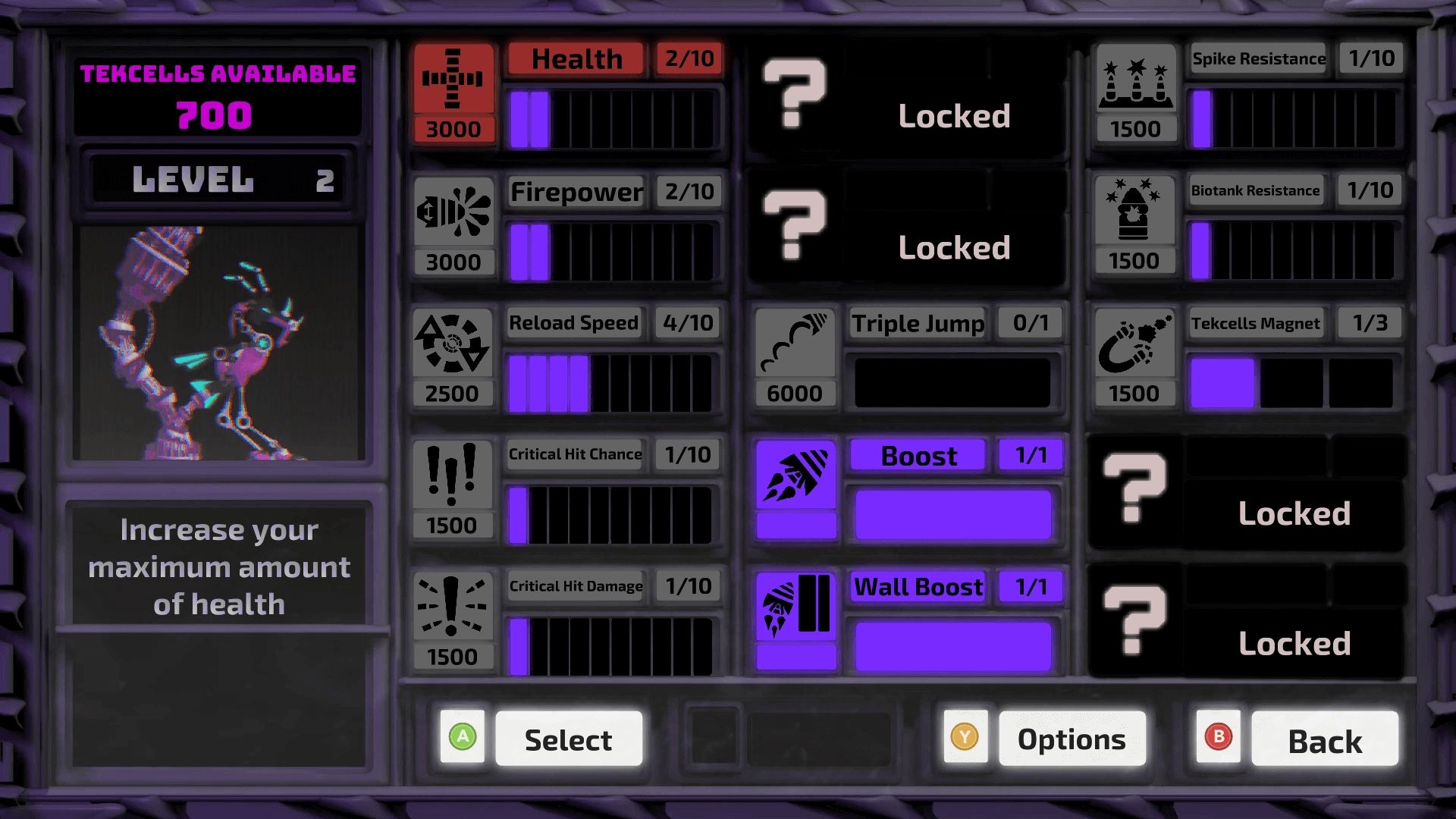 There is a way to even the odds or even tilt them in your favor, however, and that is through the game’s lovely upgrade system. Here, everything from health to firepower and even critical hit chance/damage can be boosted, on top of unlocking additional moves. What makes this so useful is that, far as I can tell, you don’t need to reach the next checkpoint or acquire enough ‘tekcells’ -- the currency -- to upgrade, in order to keep what you’ve got.

All you have to do is reach the next level, at which point tekcells will be banked and you can continue… from floor 6, 12, 18 and so on. So keep that in mind before you make use of this little trick to grind away at them upgrades. Might give ya the boost needed to progress, but it is rather time-consuming.

On the note of progression, I’m honestly a bit sad that I was unable to get further than floor 11, but at that point -- following several attempts that ended as early as 9 -- it was pretty obvious that I simply lacked the skill and/or patience. Could I have made it further, given enough time? Probably, accompanied by them lovely disco-esque beats, colorful visuals and all, although chances are it wouldn’t have been fun -- not for me at least. 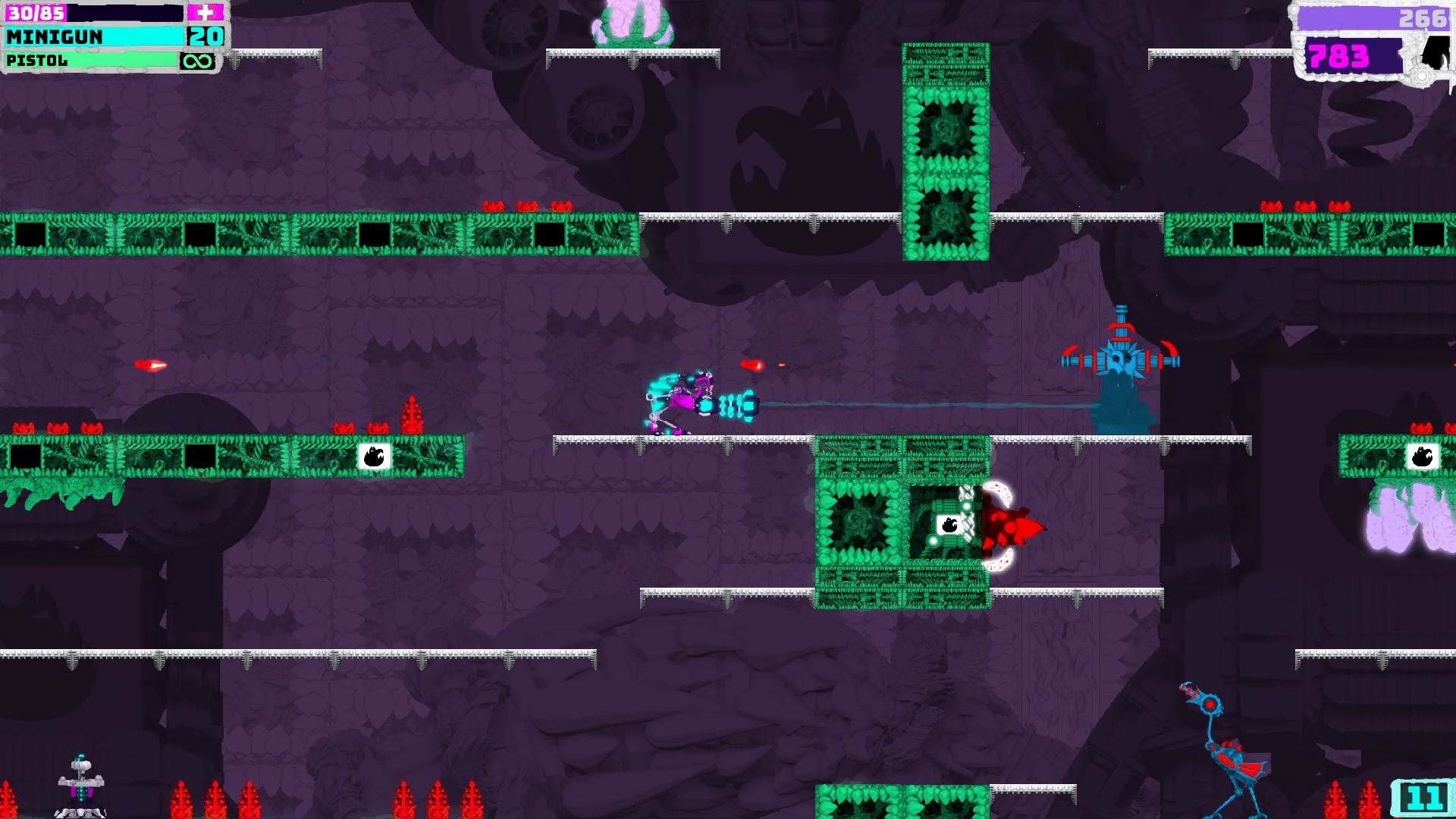 That said, Featherpunk Prime is by no means a bad game because as I mentioned earlier, I enjoyed it a great deal… until the combination of a spread-out checkpoint system and high difficulty got to be too much. Aside from that, there’s a lot to like: colorful neon art, a bumpin’ (a word I rarely use) soundtrack, tight controls, an unusual protagonist, a pretty obscure plot and semi-procedurally generated levels. Good stuff, and I’m sure there are those out there who have or will at some point, manage to set my fellow flamingos free. Set. Them. FREE!

Featherpunk Prime is available from Steam, Humble Store, directly from the developer at $9.99.