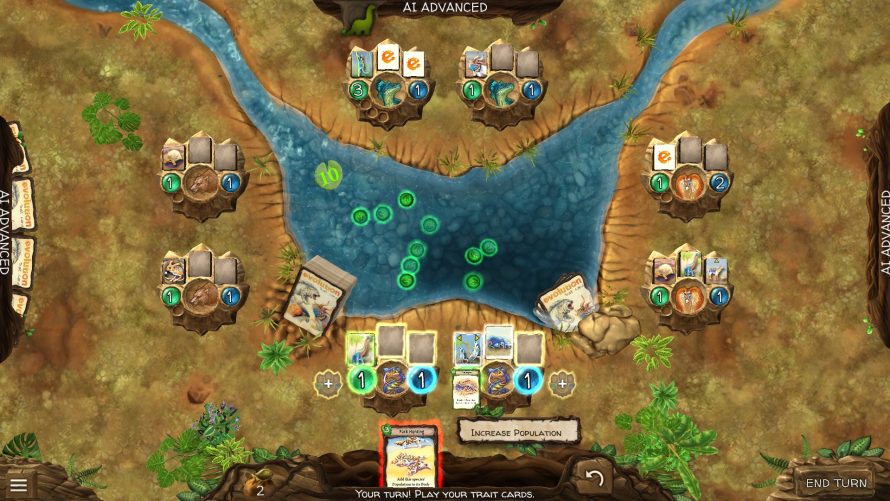 Evolve or starve. Those are your only options in this upcoming video game adaptation of North Star Games’ popular board game, Evolution. It’s much more than yet another race to evolve first, leaving everyone else behind, however, in that… you’ll have to actually plan ahead while adapting to each new challenge. Who knows, you might even end up a multi-headed meat-eating cyborg dino, chomping on every last opponent.

While it’s highly unlikely that the last bit there is going to be part of the experience, I am still fairly certain that some truly unique species will see the light of day, the game featuring “more than 24,000 possible species”. That’s a lot, and you know what that means: replay value! With this many species combinations, no two rounds of Evolution are going to be the same. Which is an undeniably good thing in my books, because I won’t rest until I’ve created the most hideous abomination of a dinosaur(?), RNG be damned! Yeah!

Combine different traits rooted in science, such as a long neck or a defensive shell, in limitless combinations to help creatures thrive in the fight for survival over scarce food resources and defense from deadly predators.

Right. Anyway, while I’m not entirely certain as to how this version of Evolution will play, here are a few pretty darn awesome things we do know about it, ahead of its February 12 release: cross-platform multiplayer will be a thing along with a groovy campaign mode, there’ll be ranked play and even… wait, what? “Simultaneous play”? Wow. Guess turn-based is too much 2018 for these guys, eh? Now I really can’t wait to get my hands on this one.

Evolution Launch Announcement Trailer
Facebook Twitter LinkedIn Pinterest Tumblr WhatsApp Telegram E-mail
Previous article 'Hyper Jam' Lets You Brawl Like Its the '80s (Again), Powerups and Synthwave Aplenty
Next article Get Tactical Online in 'Clatter' to Prove Your Worth as a Robot Master