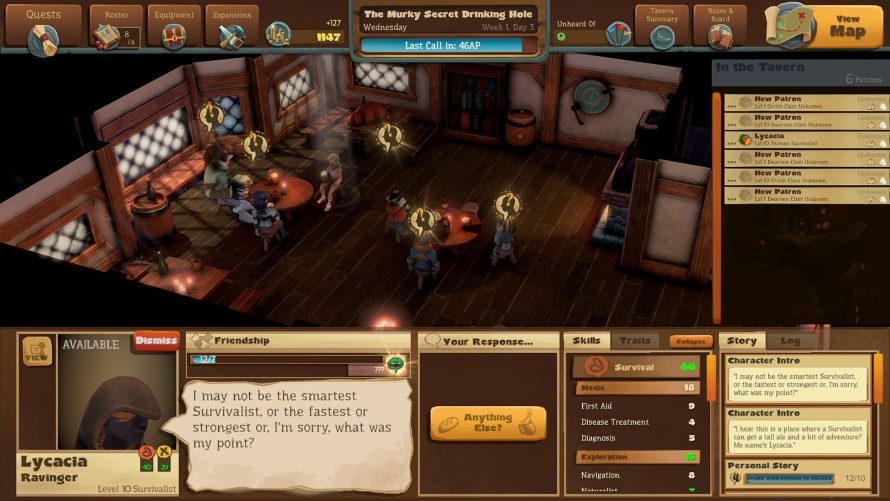 Chances are if you’ve played more than a handful of fantasy RPGs, you’ve visited a tavern at some point, be it to grab a drink, bolster your ranks, or something else entirely. But what if, just this once, you were to stand on the other side of the bar? What if you were instead the one running the place? Because in Epic Tavern, you’ll be doing just that, recruiting adventurers, sending them out on incredibly hazardous quests -- all to make your tavern grow! Sounds like a grand ol’ time to me…

Far as I can tell, there’ll be a lot to see, do, experience, and so on, in this one. From quest choices to who gets hired and who gets to go on which adventure -- so much to manage. Oh, and every bit of it will help steer you tavern in one direction or another, making it more and more, you know, epic (hence the name of the game?). Perhaps this quote from the developer describes it better: “In Epic Tavern, you build the destiny of your world, one drink at a time.”

I mean, who doesn’t like to raise their glass every once in a while, in video games? Even more so when they -- like this one -- are of the fantasy variety as surely some of its more than twenty different classes will take a seat at the bar. Surely. If not the mage, then perhaps the mighty warrior… a drink to his courage, or some such?

Build a legendary Tavern that draws the greatest heroes in the world. Befriend your patrons by loosening them up with frothy pints and hire the Adventurers whose traits you desire.

Do keep in mind however that not every adventure, journey, or even minor quest, will go well. There will be times when certain heroes-for-hire simply do not make it back. At all. Not even bits or pieces of them. But then you just gotta pour one out, grieve, and move on. There are always more would-be heroes eagerly waiting for a chance at fame and fortune, and who knows -- maybe the fallen did accomplish something, even if they failed miserably at the task laid before them?

No one knows exactly what is going to happen, or where the many stories waiting in Epic Tavern will lead, just yet. And since it’ll be launching as an Early Access title (come September 7, 2017), it’ll probably be even longer before we’ll be able to experience the full, well, experience. Even so… cheers!