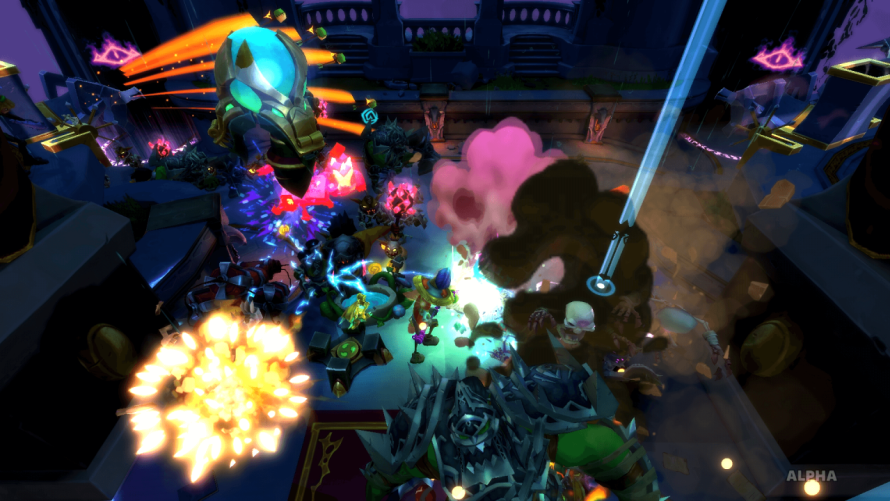 The Old Ones’ armies have invaded Etheria in Dungeon Defenders II, and it’s your job to -- alone or with a few friends -- stop them. A simple enough task that involves the construction of massive cannonball-flinging towers, electrifying auras, and traps that go… well, KABOOM. A simple enough task, if not for the fact that the Harbinger recently decided to join the invaders on his fancy-pants airship. What a jerk.

Ain’t all trouble and bad news in this latest addition to the popular tower defense RPG, titled The Harbinger Awakens, however, as it does also bring some much-needed changes/additions. For starters, loot drops are now significantly less in quantity, while noticeably more in, well, quality. Basically, less map clutter, more good stuff. As someone who’s logged more than seventy hours in the game, let me tell ya, this is a godsend. Now players can actually tell towers apart from enemies, instead of having either (or both!) obscured by a sea of useless items. So good.

Leveling has also been tweaked a bit, which those new to the game -- or anyone with intent to level additional characters -- will be pleased to hear. Prior to this update, 38 to 50 (cap) was a grind fest, to say the least. Not so anymore, as access to End Game/Insane now unlocks at 40 instead of 50, removing the need to plow through Free Play/Hard, falling asleep frequently in the process (I know I did, at least!).

But the core of The Harbinger Awakens is still, unsurprisingly, the Harbinger, and you’ll be able to fight this guy… by boarding his airship! That’s right, one of the three new maps -- two of which are redesigns of old -- takes place on an airship. An airship! It’s anything but easy too, as this grumpy creature of darkness has a lot of tricks up his sleeve. Oh, and there are story elements too within these new maps, complete with cut-scenes and all.

Did I mention the Harbinger also drops four exclusive weapons (one for each class)? Or how the mini-expansion, like the base game, is free-to-play, void of pay-to-win nonsense? There’s also the usual round of new cosmetic items to deck out your heroes for the festivities, along with an increased difficulty across the board. Time to continue the fight… for Etheria!

Dungeon Defenders II is available from Steam (Windows) in Early Access, and the game is free-to-play.