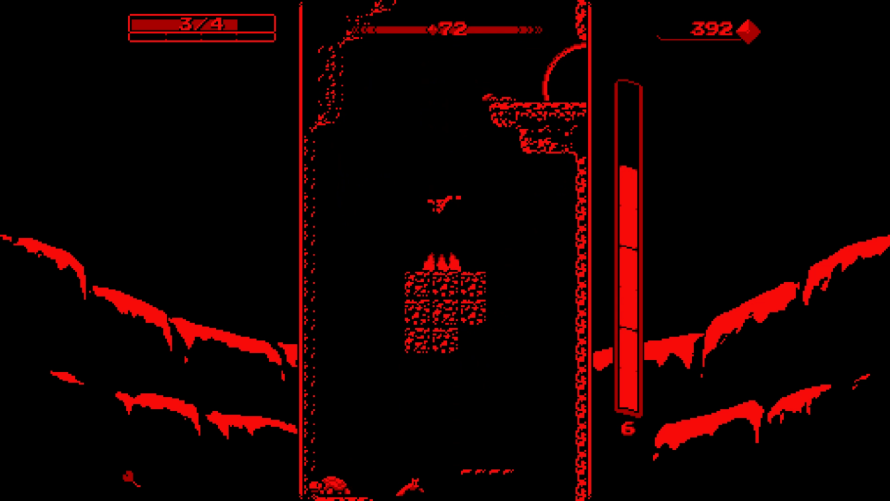 Little did I know that wells held untold treasures, or that gunboots were a thing. Well, in this here game, anyway. But if you do come across either in the real world, do let me know, eh? Right. Anyway, Downwell‘s protagonist sure has guts, carelessly jumping down a ridiculously deep well in the name of greed. That and excitement, I suppose, given the hazards that lurk below. No matter how many times he died, time and time again, he would gladly brave the depths. Because who’s to say if this time would… be the charm?

Spoiler: none of them were, as in spite of playing plenty, I was unable to finish the game. Unlocked plenty of interesting tweaks to both the gameplay and overall appearance though, on top of seeing some truly strange things. Including ghosts, skeletons and floating slimes. Definitely not your typical well this one, that’s for sure. As for exactly why the shopkeepers were there, and how long they’ve been waiting, seemingly open at all hours, shall likely forever remain a mystery. Much like what lurks at the bottom of said well (for me, at least -- many better than I have long since finished the game, I’m sure).

But let’s take it from the top, so to speak; and not just because of how many times I saw that part of the game, frequent deaths bringing me to the surface more often than I would have liked, and all. That said, if not for the aforementioned gunboots, I would likely never have made much progress. It is, after all, an absolutely brilliant piece of equipment, slowing one’s descent with each shot, making navigation noticeably easier. 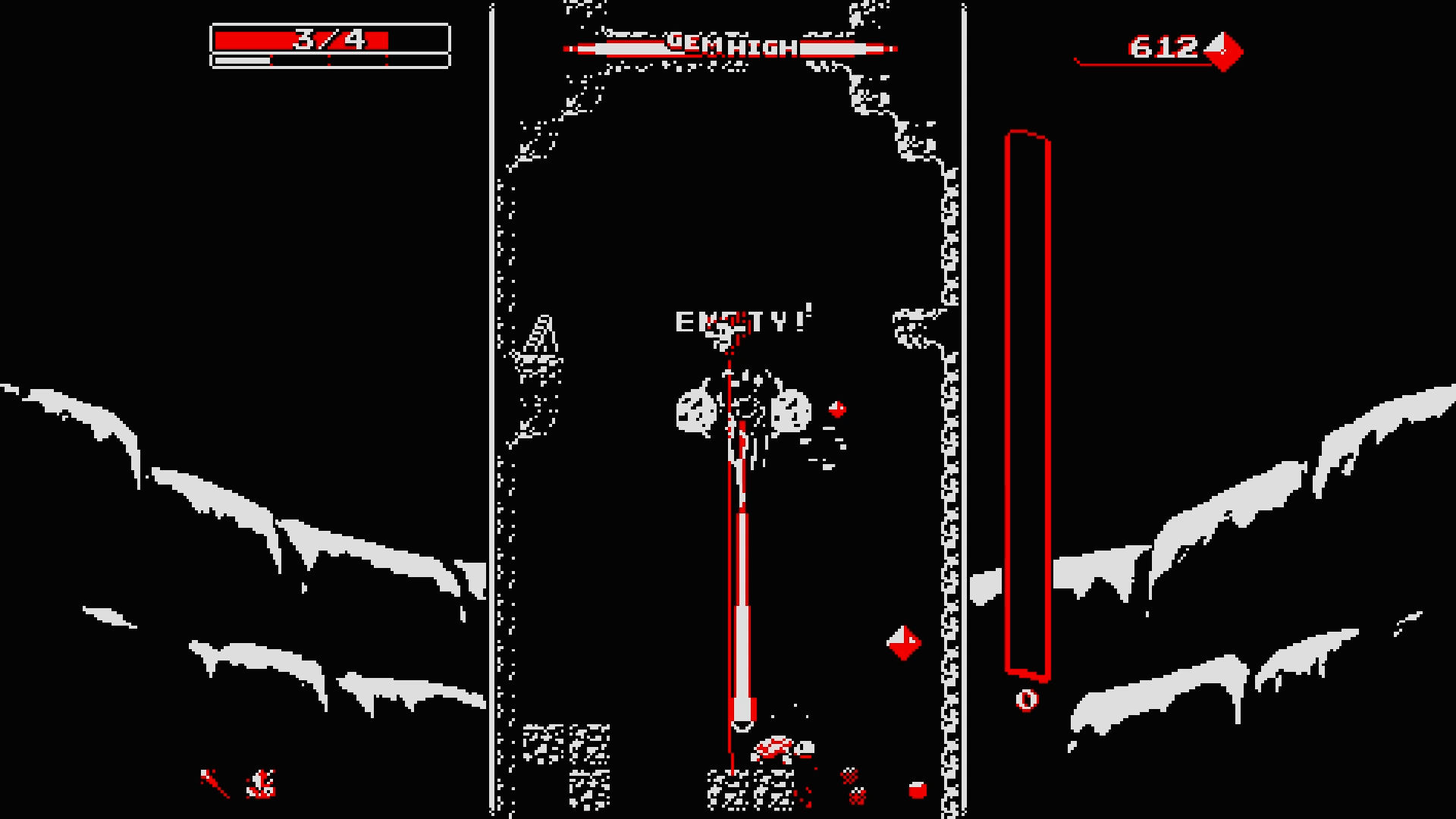 You do only have a finite amount of these, however, and depending on the weapon of choice -- and which upgrades have been acquired, if any -- this number varies from two to… well, I do recall… something as high as five? Could be remembering wrong though. All those restarts. Hard to keep track!

Fortunately, you won’t be dealing with mid-air reloads or collecting ammo from fallen foes here to recharge your supply. Instead, you simply have to stomp someone or something -- anything goes, as enemy and ground alike will bring you back up to full. There’s even a combo meter of sorts for those who feel like pulling off crazy acrobatics, although I do believe this requires you to gun down enemies in rapid succession without touching the ground. A rather tricky prospect until you reach the later/deeper areas, given the number of tiles littered across the screen.

Which brings me to your main source of ‘progression’ in Downwell: gems! These can be acquired from several sources, all of which include destruction of some form. Enemies will drop them upon dying, jumping on various objects to smash them will cause gems to fall out, and I think there’s one more. But it’s hard to keep track when you’re focusing on not dying while also racking up a relative fortune… and going deeper and deeper.

While you don’t get to keep upgrades acquired during each run, with enough gems (in total), you can still get a permanent advantage of sorts, in the form of different ‘styles’. The first of these may not sound overly exciting at first, everything in caverns replaced with gun modules. It is though and even more so compared to, well, nothing. Which is what you start with, making weapon spawns significantly harder to come by. 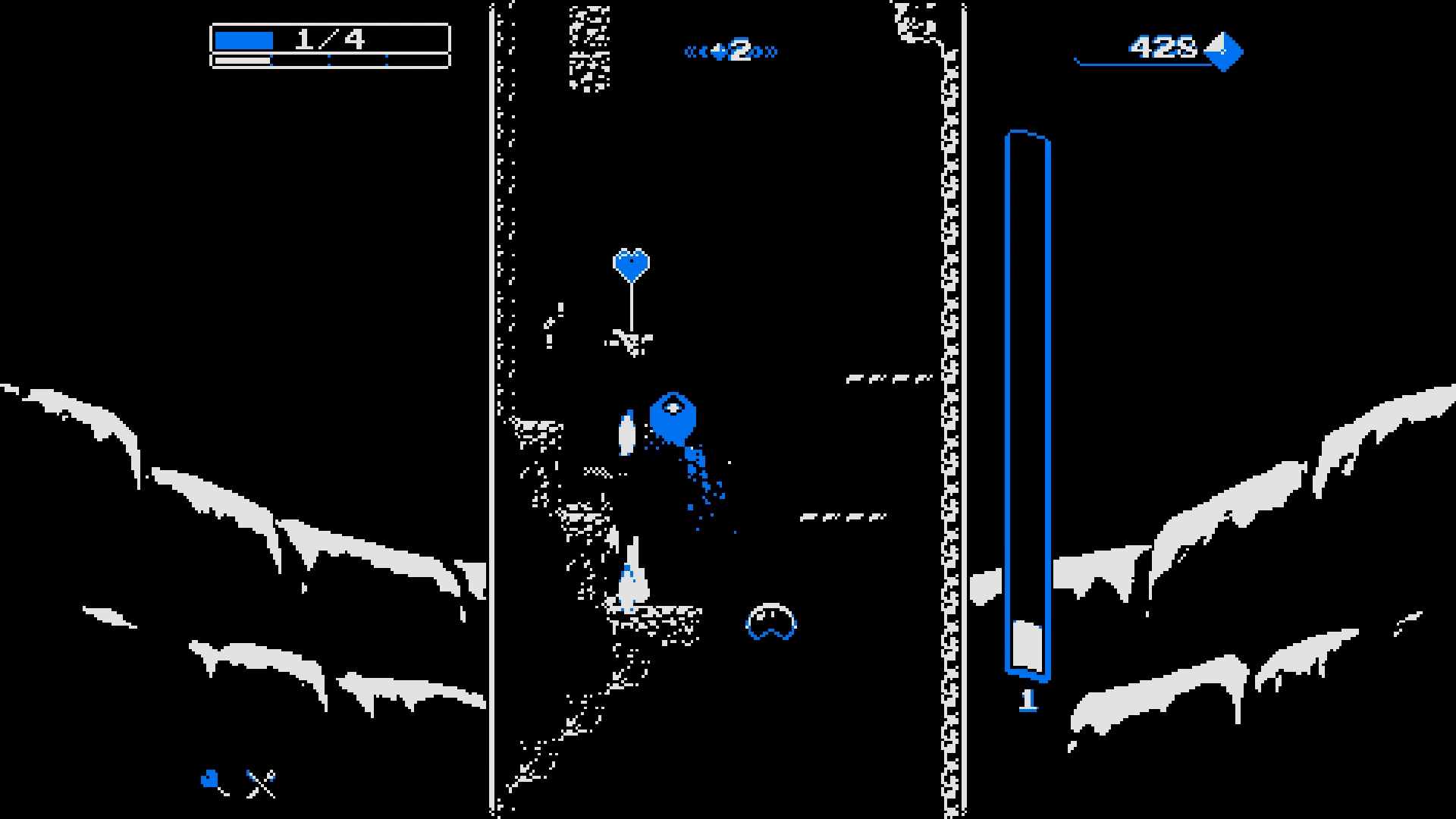 Something noticeable less exciting also unlocked by your total gem count is… color schemes. Or perhaps that’s a bit harsh, seeing how one, in particular, did make it easier to react to what the game would throw at me as I went ever deeper. Other, not so much, to the point where several actually felt more like a hindrance than a help. They can be toggled easily between runs though, so feel free to experiment with all those lovely colors. Or, you know, stick with the original. It does after all look pretty darn good, that black and white with a hint of red for good measure.

But as you run, jump, shoot, bounce, and all that good stuff -- helped or hindered by your choice of colors -- don’t forget to pay close attention to what’s coming up. If you have time for that, which you kinda rarely do, falling so fast, never knowing what lies ahead. Until you’ve got a few runs under your belt, this may seem like borderline unfair, but stick with it and soon you’ll be cruising from one enemy to another, rarely landing to catch your breath. Just keep in mind that not all things that move can be stomped. A lesson I learned the hard way, and several times at that.

On top of that, I do believe the health pool also varies, some taking a few hits while other requires unloading your entire clip. The only way to figure out what’s what in this regard, is to keep at it, learning by doing, and maybe next time you won’t try to stomp something spiked. Okay so some of them are obvious ‘stomp me at your own peril’ encounters, while other are the opposite, completely immune to gunfire. But unless my memory is lacking… there are some which I could have sworn were ripe for smashing, only to lose health upon making contact. Painful.

Early on, like in most well-designed games, I would only encounter simple enemies like bats and what I believe to be slimes. Hardly more than a mild nuisance, and once I’d unlocked my first style, I would simply fly past them as much as possible to reach the lower depths. Because this was where the fun -- and challenge -- lied, along with more gems! So why waste time slowly descending the easy levels, at that point? Why indeed. 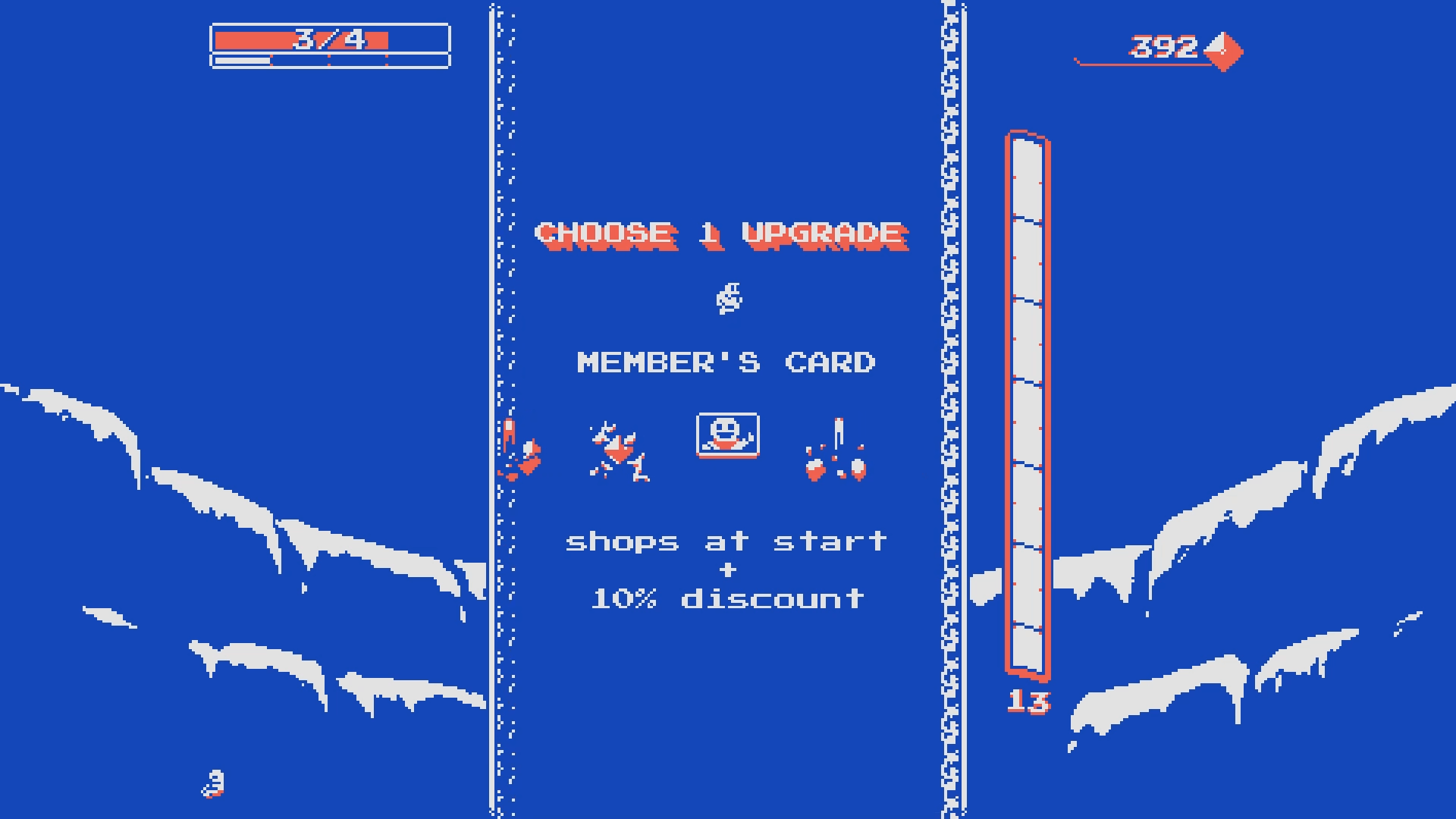 Each consecutive level also meant a new upgrade, however temporary (lost at the end of the current run, as state earlier), chosen from a randomly generated pool. Some fun things here too, like getting a weapon recharge by picking up gems, a jetpack, a balloon (wait, what?), and the ability to consume fallen foes for health restoration. Some fun and, at times, quite weird things. All beneficial though, in some way.

Now, while I would love to blame the controls for never reaching the end of Downwell, I can’t. Not without lying anyway, as they were pretty darn tight in every regard. Everything from running to jumping and of course, gunning, complete with invincibility frames at the loss of health, worked as intended. Do yourself a favor and use a controller, though. Such a fast-paced platformer does not lend itself well to keyboard controls, in my experience. 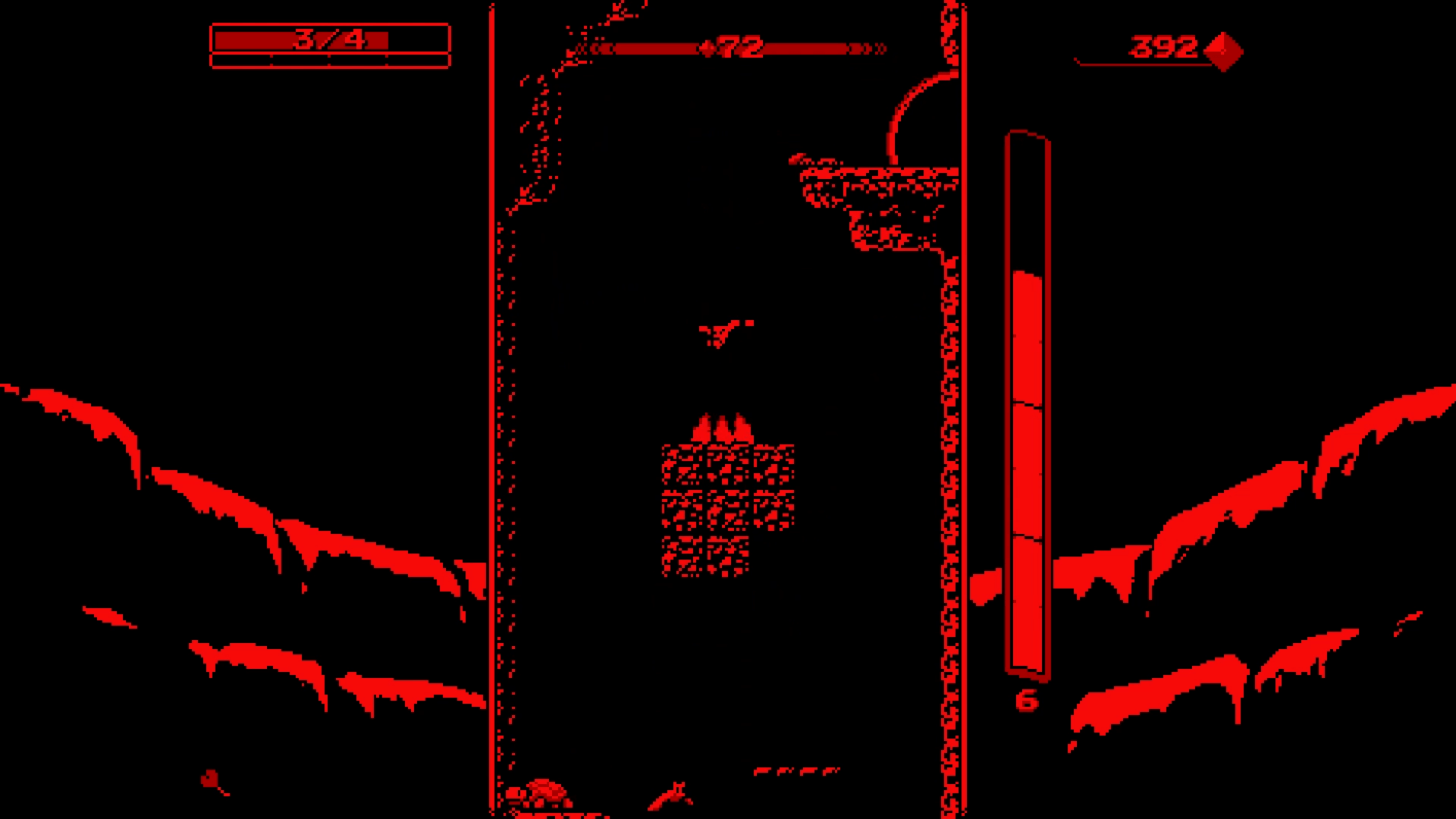 Last but by no means least, music! I may be slightly biased, being quite the chiptune fan, but… what’s here is actually really good. To the point where I found myself wishing the game had separate sliders for effects and music, but alas, an on/off toggle for both and a global volume level would have to do. (Spoiler: I mostly played with effects muted.)

What a game! An undeniably challenging experience, but quick restarts and meta progression does help ever so slightly -- provided you’re willing to put in the time, as those unlocks do not come cheap. Enable the timer, remove the backgrounds and crank up that volume though, and chances are you’ll soon find yourself blasting lasers and shotguns all night long, while stomping slimes, ghosts, bats, even a turtle or two while going… Downwell.

Downwell - Launch Trailer [iOS and PC]
Facebook Twitter LinkedIn Pinterest Tumblr WhatsApp Telegram E-mail
Previous article Let's Get It Kickstarted: 'Forgive Me My Henchmen'
Next article Get Ready to Spin the Wheel This Summer When 'City of the Shroud' Opens Its Tactical Combo-Based Gates With... a Living Story?