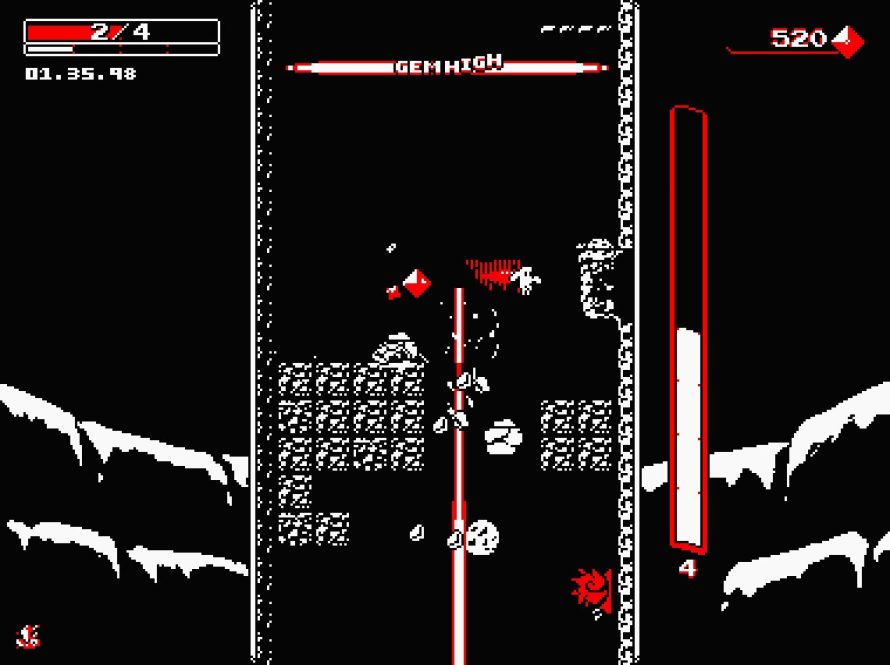 Treasure hunters come in many different shapes, sizes, races, etc. -- in fact, the lot is as varied as their destination of choice in search of undiscovered treasure. Few have done what the protagonist of Downwell is about to, however, which is… well, he’s going to jump down a well. No, really. Delving deep and greedily this fella is, going further and further down. A crazy endeavor, although one that just might pay off. Maybe.

Equipped/armed only with his mighty Gunboots, nasty creatures and great wealth awaits him in this well. Well (hee hee), one of the two, in any case. Which? I’ll give you a hint: those Gunboots are going to be incredibly useful, and not just for movement. Unlike most footwear, these things actually serve more than just the obvious purpose, in that they also act as a weapon and a way of slowing one’s descent. A descent which, given the hazardous journey ahead, will likely drive our nameless protagonist to the brink of madness and beyond, long before the end.

Make your way further and further down into the darkness filled with nasty creatures and mysterious secrets to collect the spectacular red gems scattered about the rocks.

Speaking of which, four hits and you’re done, back to the beginning. On the flip side, levels are procedurally generated, so while you’ll be treading the same ground quite a bit, it still won’t be the exact same… ya know? Also, eventually, you will become one with the game, able to dance your way through, as if-- actually, no, that’s a lie. Chances are, given its high level of difficulty, you’re more likely to reach the credits by the skin of your teeth.

Shops along the way do help even the odds ever so slightly though, providing healing items, upgrades and other ‘boosts’. Oh, and you might as well spend it all ASAP, because who’s to say when you’ll meet your untimely demise for the umpteenth time, losing everything yet again? Remember, practice makes perfect and patience is a virtue…