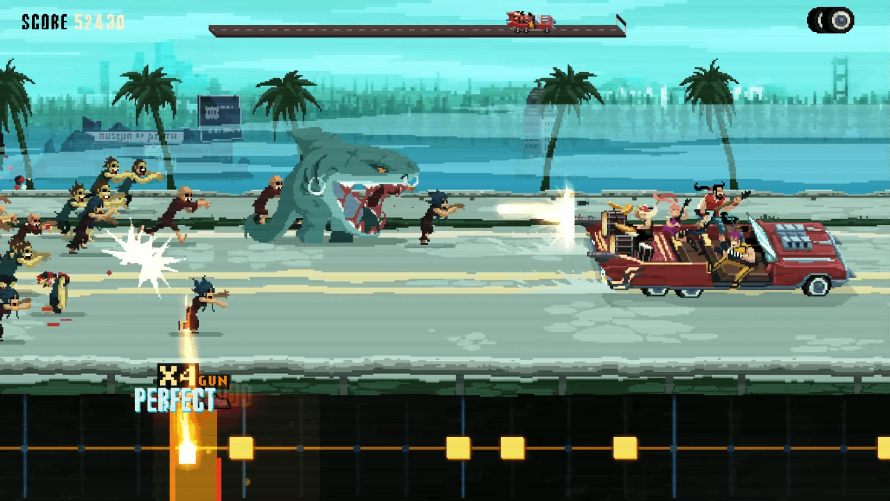 You can’t kill the metal, or so they say, but in Double Kick Heroes, you most certainly can kill with it. I mean, hooking up a bunch of handguns, shotguns, grenades and other weapons to a drumset count as being… just that… right? Right. Probably a tad crazy, and yet, banging a drum (quiet in the back), hitting all the right notes, is the only way you’re going to survive in this post-apocalyptic world. Because zombies are constantly chasing you, and your only defense is to go on the offensive -- WITH METAL!

Did I mention how the whole thing is a tad, if not completely, bonkers? Because it is, no doubt about that. Yet at the same time, the sight of zombies being mowed down, courtesy of a mix of fast-paced drum solos and every so often, slower taps, is undeniably awesome. Unless you don’t care much for this particular musical genre of course, in which case… well, you’re probably not going to find much, if anything, to like here.

If on the other hand, you’re even the slightest bit interested in rock and roll of the heavier kind, you should probably stop reading right now and go play the Double Kick Heroes demo. Wait, no, continue reading, and then fire up the demo. Because who knows when the full version -- complete with a lovely level editor -- is going to be out.

So, back to the zombies, all of which need to die. Immediately. And the only way to do that is to accurately hit notes, Guitar Hero style. Oh, and pressing one button to fire the upper guns, while another triggers the lower, adding a fair amount of tactical depth on top of the rhythmic aspect. Early on, this is not that big a deal as you have plenty of breathing room between each note and not a whole lot of enemies to deal with.

But as the game progresses, you’ll want to strive for perfect solos as this is the only way to get better guns. Incidentally, doing poorly causes the exact opposite, punishing you for playing poorly. As it should, because being a drummer is a big deal, ya know? Even more so in this case, seeing how he’s all that stands between his band and the undead. As for how shambling corpses are able to keep up with a fast-moving vehicle, well, it’s a video game and a rockin’ one at that.

Double Kick Heroes should be out on Steam later this year. Did I mention the demo?