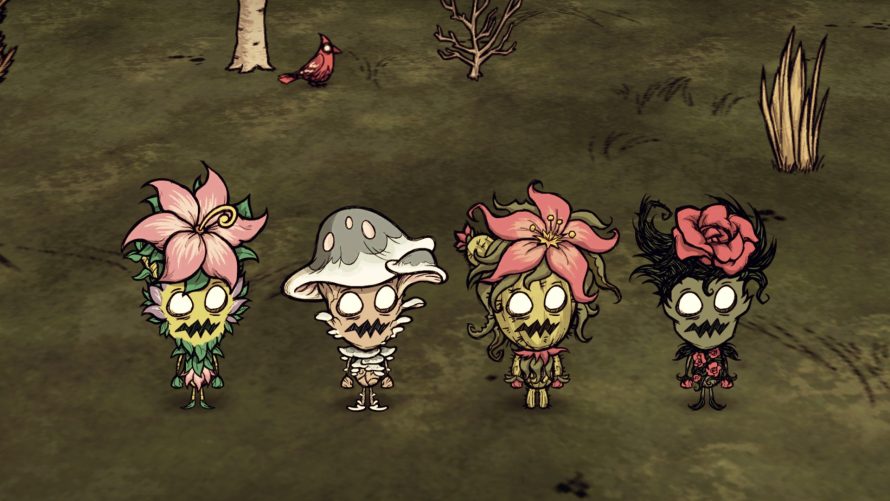 Not too long ago, the ever-lovely multiplayer-centric survival title that is Klei’s Don’t Starve Together saw the addition of a rather mischievous character with the release of Wortox. But where that creature was all about the consumption of souls and causing trouble, Wormwood instead has quite the set of green thumbs (literally, at that).

This will prove undeniably useful for those with a strong desire to get back to nature in the game. Or for those in need of something different, I suppose, which Wormwood most certainly brings to the table. For starters, he receives no healing from food items and “loses sanity when plants are destroyed near him”. Ouch. Well, so much for staying with the group as they go about gathering materials for a Garland (aka. flower hat). At least sanity is replenished when plants are planted (hehe) nearby, so I guess… make sure you plant two for every one you remove? On top of that, unsurprisingly, fire is very bad for this guy as not only does he burn for longer periods of time, the poor thing also takes a whoppin’ 25% extra damage from it!

Though the circumstances of his creation were unusual at best, Wormwood came into this world full of optimism and curiosity, ready to make new friends and see all that life had to offer.

If I didn’t any know better, I’d say he might not be worth the trouble for all but the most experienced players. Fortunately, that’s not even remotely the case as he does come with a set of unique positives as well, one of which is an aptly named ‘Green Thumb’ crafting tab, containing a variety of brambles (offensive and defensive alike), compost (for healing and/or fertilizing), and I believe it also hosts the means by which health is exchanged for… a log. Peculiar character to say the least. Oh, and come springtime, Wormwood will blossom, transforming drastically. Yay!

Don’t Starve Together (and the Wormwood Deluxe Chest) is available on Steam, carrying a $14.99 price tag.

Don't Starve Together: Lunar Roots [Wormwood Animated Short]
Facebook Twitter LinkedIn Pinterest Tumblr WhatsApp Telegram E-mail
Previous article 'Byte Driver' Lets You Hack Other Racers in Vector Style Like a Blast From the Past
Next article Legendary Monsters be Slain With a Mad Crew in 'Here Be Dragons' for the Discovery of the New World