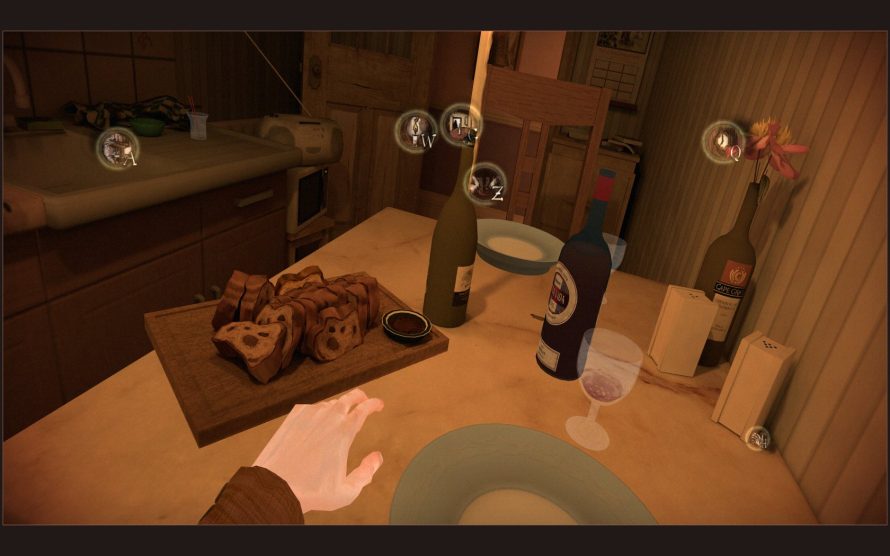 Remember that feeling after inviting someone to dinner where you’re sitting at the table, waiting for them to show up? Anxiety levels rise, you find yourself constantly checking the clock, etc. No? Lucky you. Maybe you should try Dinner Date then because here you get to experience that exact scenario in a video game, as seen from the subconsciousness of one Julian Luxemburg…

The first thing you’re likely to notice is that Dinner Date completely does away with any form of traditional interface. In its place, bubbles with letters inside them float around the screen, each representing a currently possible action. These change depending on what Julian wants to do at the current point in the story, as well as what the player is trying to make him do. You won’t get the option to eat something that requires a spoon or a fork without picking it up first, for example.

With each tick of the clock (almost literally, right there on the wall), Julian’s thoughts tend to wander quite a bit, and this is where most of the ‘story’ comes from since the player is able to hear them like spoken words. Now, I’m not gonna lie -- there were times when I found him to be somewhat annoying, but then I reminded myself of the situation he was in and decided to cut the poor guy some slack.

Ain’t easy sitting all alone at the dinner table, waiting for your date to arrive, especially when it’s the first one with this girl/guy. I’m pretty certain that my mind would start to wander too, as I’m sure is the case with most people…

All in all, while an interesting experience, Dinner Date is definitely not for everyone. The entire setup is closer to that of an interactive movie than anything else, which is likely going to be a turnoff for some, even though I did still find myself enjoying it. On top of that, the immersion factor is tied directly to your ability and willingness to take on the role of Julian Luxemburg, for the duration of the course.

If you simply rush through it, not paying attention to his thoughts and/or don’t play along with the whole ‘nervous guy waiting for his date’ setup, you’re going to miss the point completely. It’s not the kind of game that’ll give you something for nothing, so from the moment you take control of Julian’s body to when the credits roll, I’d recommend playing along; who knows, you might even learn a thing or two?