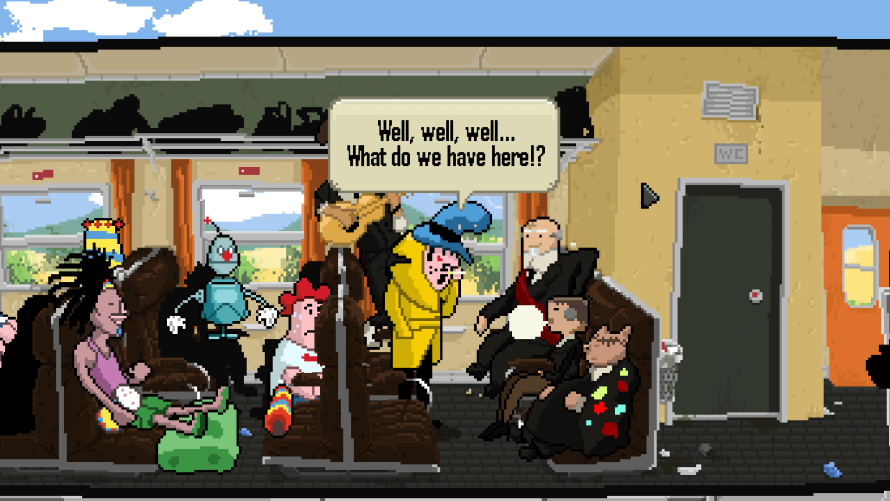 Get ready to annoy passengers aboard the express train from Lisbon to Porto by questioning them, going through their belongings, spending way too much time at the bar, and being a generally incompetent nuisance. Might seem like a rather odd way to go about solving a murder mystery, but it isn’t; not for Detective Case and Clown Bot in: The Express Killer‘s protagonists anyway. Wouldn’t hold my breath for a culprit actually caught, but who needs justice when you can have hilarity?

That said… the uncanny duo does need to hurry up if they want to actually, you know, catch the killer because once the train reaches the final station, that’s it. Everyone gets off, and the killer disappears; until he/she/it strikes again. And again. And again. Doesn’t help that Detective Case, aka. the world worst detective is stuck with a sidekick -- Clown Bot -- who’d rather be working as a circus clown. Worst sidekick, worst detective -- what a team!

With the mythical Detective Case, also known as the world worst detective, a man so rough and rude that his witnesses would rather be run over by a slow-moving freight train than to be questioned by him.

On top of that, how about some lovely 256x192 resolution for the entire experience? How did they fit an entire train full of peop-- oh wait, that’s not how pixels work. Right. Anyway, once you’re done catching ‘The Express Killer’, it’s time to… tackle three additional cases! As the same two absolutely incompetent would-be detectives, of course, because why mess with perfection?

Detective Case and Clown Bot in: The Express Killer will be available from Steam, early 2018.

Detective Case and Clown Bot in: The Express Killer - Teaser
Facebook Twitter LinkedIn Pinterest Tumblr WhatsApp Telegram E-mail
Previous article On Steam, the Week Prior: Choose Your Own Egypt
Next article 'InnerSpace' Lets You Soar Through the Sky, Explore the Depths In Search of Relics